For nearly a century, Quilombo of Palmares was an Afro-Brazilian state, populated and run by people who had freed themselves from slavery. Brazil is the fifth most populous country in the world, so perhaps it’s not surprising that the country has a complex racial history. For instance, how many Americans know that there was an Afro-Brazilian state, made of those who had freed themselves from slavery, for almost a century?

The last leader of this community, known as Quilombo of Palmares, was Zumbi. Not a lot is known about Zumbi, including whether “Zumbi” was even his real name, and yet he remains a powerful figure in Brazilian historical consciousness. Scholar Robert Nelson Anderson writes in his overview of the history of this maroon enclave, “for many Brazilians, especially those of African descent, Zumbi embodies the strongest resistance to the slave-based colonial regime and, consequently, the struggle for economic and political justice today.”

Beginning in the early seventeenth century, self-emancipated Africans “made their way to the interior and there established a mocambo, or maroon settlement, of some reputation.” As more and more people were captured and kidnapped from Africa, there were more of these free settlements, because flight was the main way of escaping slavery. (Of the 12.5 million Africans shipped across the Atlantic, 5 million were taken by Portuguese slavers.) Maroon settlements dotted the Americas, including in the Caribbean. But Palmares, a united collection of mocambos, also known as quilombos, was one of the largest, best organized, and most defended.

To slavers, maroonage represented an existential threat. Palmares was doubtless especially distressing to the slavers, since as a self-administering community of settlements, it provided a clarion call for others to escape bondage. In response, the Portuguese attacked Palmares again and again throughout the mid-seventeenth century. The Palmarinos fought back, including raiding plantations to free more of their enslaved brothers and sisters.

In the end, however, the Portuguese were successful in crushing Palmares and killing Zumbi. Slavery would last in Brazil for almost two more centuries. In 1888, Brazil became the last nation in the Americas to formally abolish slavery. And yet, Anderson writes:

While primary sources by colonial officials and secondary sources […] have tended to see Palmares as a threat to Portuguese colonial sovereignty, and the quilombo’s defeat as basically a patriotic victory, even white commentators have lionized the Afro-Brazilian state on occasion.

As Anderson notes, most documentary evidence about Palmares comes from its destroyers, although more recent archeological evidence has helped to balance the Portuguese bias. The legend of Zumbi has only grown.

Anderson is most interested in the “Afro-Brazilian character of the community,” which could be said to mirror the greater Brazilian heritage. Some Brazilians today would contest that, of course. Like so much of history, this centuries-old-story has continuing ramifications. The Quilombolas, people descended from the inhabitants of the old maroon communities, were singled out by the new far-right President of Brazil during last year’s election campaign. He compared them to livestock. 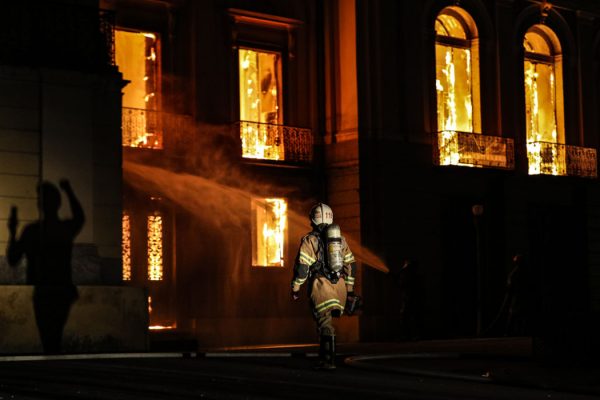 Brazil's oldest natural history museum has burned down. The institution played a crucial part in creating Brazil's identity as a country.