Double identity, present in both Marvel’s Black Panther and in the critical race theory of double-consciousness, enables black American viewers to see their two identities played out on screen. 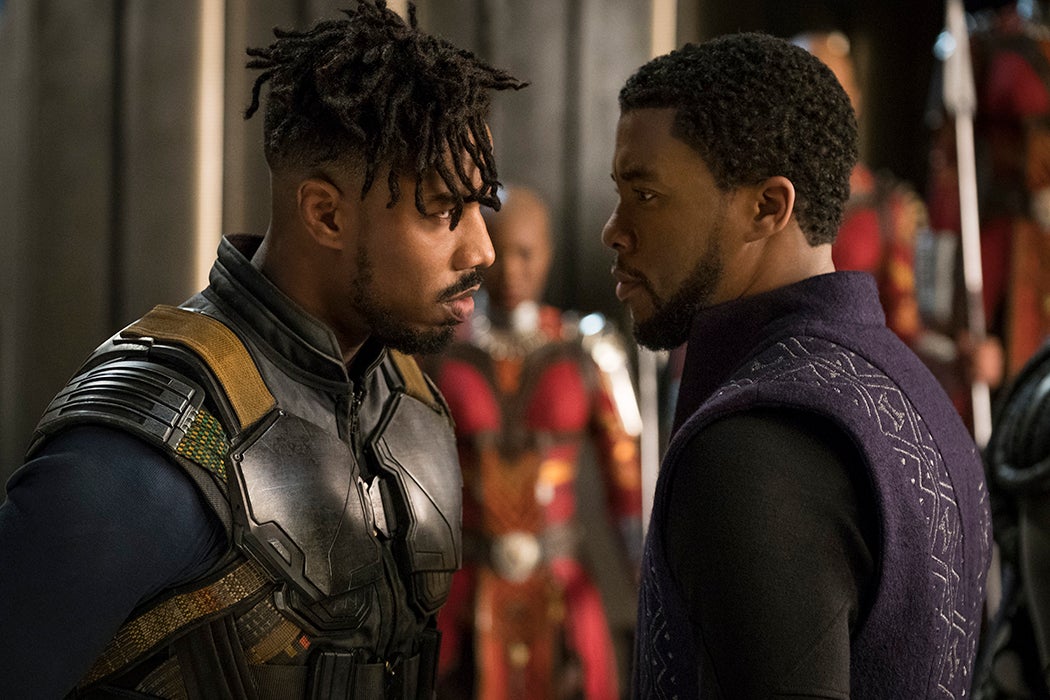 There is no question that Marvel’s Black Panther has changed black cinema—and particularly black superhero cinema—forever. Along with other recent black-centered, award-winning films such as Get Out and Hidden Figures, Black Panther allows black viewers to see themselves in the protagonists on screen. But the connection in this particular movie may go one step further: the concept of double identity, present in both superhero movies and in W.E.B. Du Bois’s theory of double-consciousness, enables black American viewers to see their various identities—the African self and the American self—played out on screen, culminating in a cohesive whole.

For W.E.B. Du Bois, African Americans have difficulty unifying their black identity with their American identity.

In his 2002 article “’Black Skins’ and White Masks: Comic Books and the Secrets of Race,” literature scholar Marc Singer notes that double identities are a central theme amongst all superheroes, whether their identities are hidden or known. He argues that “this concept of the ‘secret identity’ lies at the heart of how some recent comics have capitalized on […] the superhero genre’s conventions in representing issues of race.” This is certainly true in Black Panther, where W.E.B. Du Bois’s idea of double-consciousness plays out both between the hero and villain and within the black viewer’s own psyche. In his 1903 essay, “The Souls of Black Folk,” Du Bois writes, “The Negro is a sort of seventh son, born with a veil, and gifted with second-sight in this American world,—a world which yields him no true self-consciousness but only lets him see himself through the revelation of the other world.” For Du Bois, since African Americans have been historically oppressed and devalued, they have difficulty unifying their black identity with their American identity.

In Black Panther, African-born T’Challa and American-born Erik “Killmonger” Stevens are first cousins, yet T’Challa hails from the culturally rich and technologically advanced African kingdom of Wakanda, and Erik, the villain, from the slums of Oakland as an orphaned boy. Erik seeks to overthrow T’Challa as king in order to destroy those who have wronged the black community around the world. In a sense, Erik is portrayed as the “monster” that results from generational abandonment in an unwelcoming country, while T’Challa is the epitome of a thoughtful leader from a peace-loving one. Thus, each represents a distinct side of Du Bois’s concept of double identity: “an American, a Negro; two thoughts, two unreconciled strivings; two warring ideals in one dark body.”

This double consciousness plays out in the black American viewer as well, who sees him- or herself in the jaded “Killmonger” and is also able to embrace this new utopian kingdom. Thus the black American viewer is infused with a double identity—one in America, and one in his or her ancestral Africa. Though Wakanda is a make-believe nation, it serves to represent the thriving African countries that are often stuck behind the veil of stereotypes from the Western world. T’Challa sheds his veil in America and honors Erik (and viewers who may identify with Erik) by virtually extending his hand as a leader of a flourishing homeland.