Banning The Grapes of Wrath in 1939 California

The Kern County, CA Board of Supervisors got a lesson in the Streisand Effect back in 1939, when they banned The Grapes of Wrath from their libraries and schools. 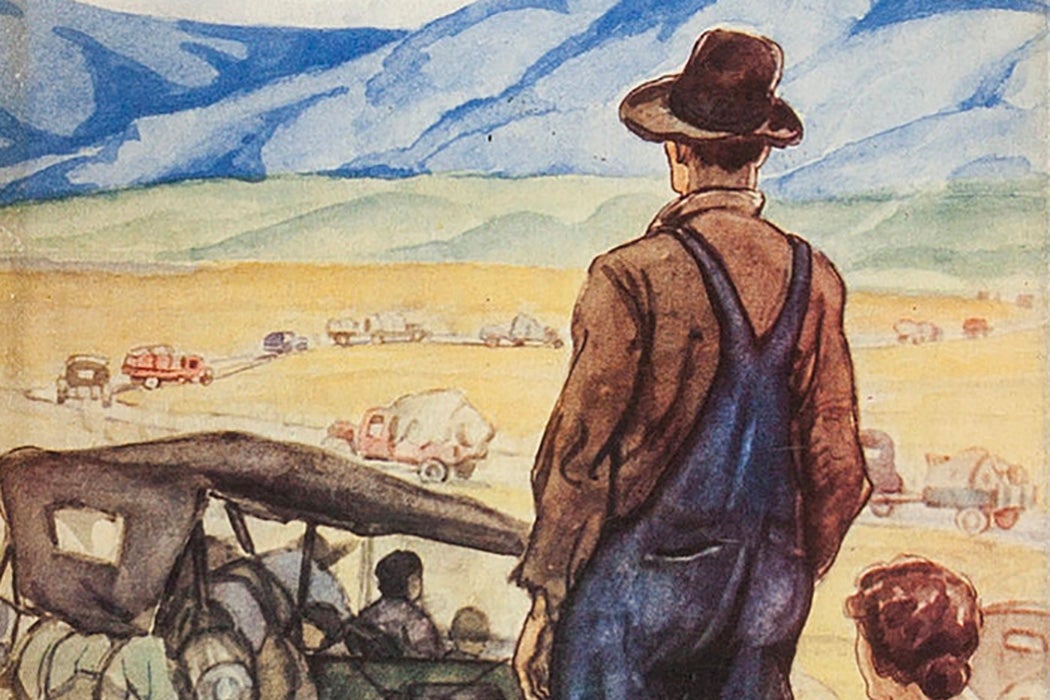 The 1939 first edition cover of The Grapes of Wrath
via Wikimedia Commons
By: Livia Gershon
3 minutes
Share Tweet Email Print

In April of 1939, John Steinbeck published The Grapes of Wrath. The story of Okie migrants fleeing to California and meeting more hardship there was an immediate hit with the public. But not everyone was happy. As librarian Marci Lingo writes, within months, Kern County, a major destination for migrant farmworkers, banned the book from its public libraries and schools.

Between 1935 and 1940, Lingo writes, more than 52,000 migrants arrived in Kern county, boosting the local population by 64 percent. Many local people, and institutions like schools and hospitals, did their best to help the newcomers. But the political structures in the county were dominated by agricultural interests that opposed relief for migrant workers. The Associated Farmers, formed by the California Farm Bureau Federation and the state Chamber of Commerce to fight organized labor, supported vigilante violence to break strikes and fought federal efforts to build camps for migrant workers.

When The Grapes of Wrath came out, Lingo writes, Kern County librarian Gretchen Knief anticipated strong local interest in the novel, and ordered 60 copies for the county’s library branches.

The resolution claimed that Steinbeck had presented the officials, farmers and citizens of the county as “inhumane vigilantes.”

Kern County wasn’t the only place to ban the book. Officials there actually got the idea from a newspaper story reporting that the Kansas City Board of Education had removed it from public libraries there.

The 4-1 vote to ban the book in the county came on August 21, with no advance publicity and no notice given to Knief. Board member Stanley Abel, a former Ku Klux Klan member, introduced it at the behest of Associated Farmers. The resolution claimed that Steinbeck had presented the officials, farmers and citizens of the county as “inhumane vigilantes, breathing class hatred and divested of sympathy or human decency” while ignoring the services and support the county provided to migrants. For good measure, it threw in a complaint about the book’s obscene language.

Lingo writes that Knief immediately pulled The Grapes of Wrath from library shelves, even though there were more than 600 county residents on waiting lists to read it. Within days, other local boards in California were considering similar bans on the book, with the support of various conservative and pro-business organizations.

Others, starting with Knief and including union groups and the ACLU, fought the ban. At the Kern County board’s next meeting, numerous people, including clergy members, county health workers, and migrants, spoke against it. And the controversy generated new interest in the book, with other California public and private libraries seeing a surge of requests for it. (Knief helped out by sending them the unused Kern County copies, until Abel told her to knock it off.)

Ultimately, Lingo writes, no other California county banned the book. And Kern County finally rescinded its ban in January of 1941. By this time, its supporters had changed their tune. Facing widespread negative publicity, both Abel and the Associated Farmers began claiming that they had only banned the book to draw more attention to it and help Steinbeck share his message.