Artists may soon be heading to the moon for the first time, but art and space travel have been linked together since the beginning. 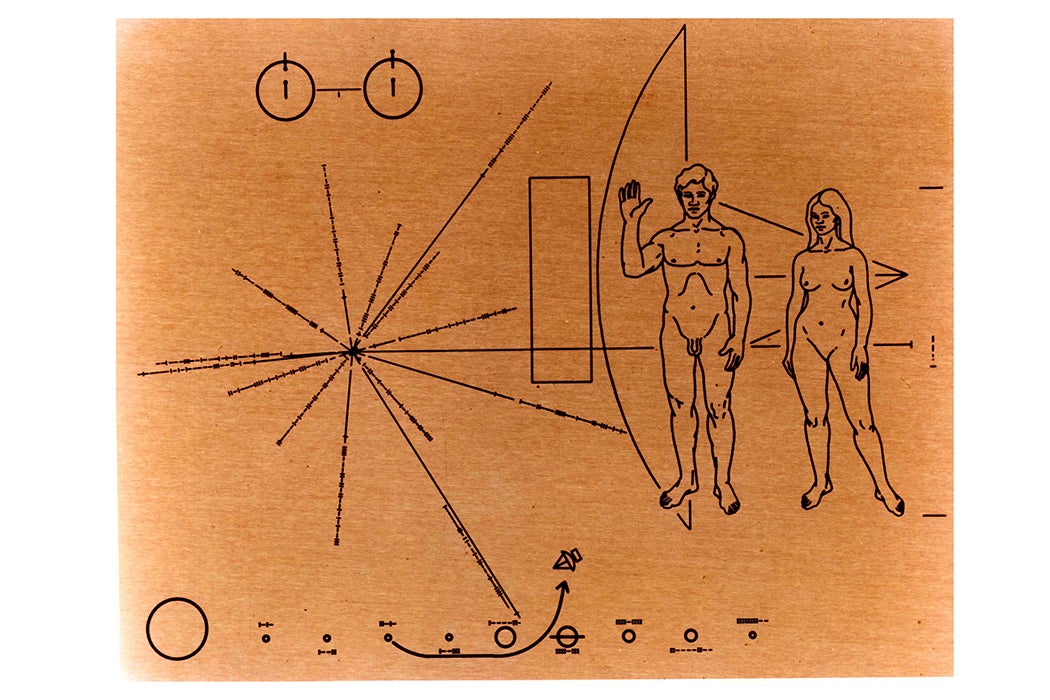 If the first tourist trip around the moon goes as planned in 2023, a group of artists may be aboard. As the Washington Post reported, at this month’s press conference for Elon Musk’s SpaceX, its inaugural passenger—billionaire Yusaku Maezawa—declared he wanted artists to join the voyage “to inspire the dreamer in all of us.”

Despite the incredible limitations on non-essential cargo, art has a long presence in space travel. In 1965, cosmonaut Alexei Leonov sketched an orbital sunrise in colored pencil on board the Soviet spacecraft Voskhod 3KD. A ceramic tile called “The Moon Museum,” with tiny contributions by Andy Warhol, Claes Oldenburg, David Novros, Forrest Myers, Robert Rauschenberg, and John Chamberlain, was supposedly secretly placed on the 1969 Apollo 12 and left on the Moon. In 1971, the Apollo 15 crew placed an aluminum figure—Paul Van Hoeydonck’s “Fallen Astronaut”—on the lunar surface as a memorial to those who died advancing space exploration. Pioneer 10 soared past Jupiter in 1973 with a plaque adorned with two naked humans and a symbolic representation of our place in the Solar System. And famously, Voyager 1 left the solar system in 2012 carrying its Golden Record containing sounds and sights of Earth.

Sometimes space art can be messy.

In 1993, Arthur Woods’s “Cosmic Dancer”—a green aluminum sculpture made for zero gravity—twirled aboard the Russian Mir space station. Woods writes about it for Leonardo: “As human civilization is extended beyond the planet, its culture will be altered by the environment. Since art and society are interdependent, art will play an important role in sensitizing human society to new environments in outer space.”

Since its founding in 1967 by Frank Malina, an artist and aeronautical engineer, Leonardo has actively covered the intersections of space and art. Artist Takuro Osaka, who created “Spiral Top” that spun LED light trails on the International Space Station in 2009, described his design in the journal: “While enjoying its beauty, people in outer space may think of the connection between the double helix structure of DNA and the helical movement of the universe.” Choreographer Kitsou Dubois, who since 1990 has brought dancers and acrobats on NASA and CNES (French Space Agency) parabolic flights, wrote on the weightless body: “Science teaches to examine; dance teaches to perceive.”

Sometimes space art can be messy. In 1998, artist Frank Pietronigro painted aboard a NASA KC135 turbojet, which approximates zero gravity in its hurtling parabolas. Within a “creativity chamber,” he squeezed acrylics from pastry bags. He writes in Leonardo:

Jouissance graced me at parabola 33 when I realized that I could not get out of the chamber despite needing fresh air. I was covered in paint and knew that my body would imprint itself on the jet’s interior if I escaped. Suddenly, a sense of awe substituted this spectacle into the sublime as I lived a moment of life. There I was, overcome by paint fumes, battered by the jet, feeling humbled and wounded by this passage.

Nausea aside, the big challenge for art in space is proving its worth as an “unscientific payload.” Artist Joe Davis wrote for Leonardo on the 1977 NASA decision to offer “Getaway Specials,” small shuttle payloads available for “a $10,000 fee to scientific, commercial and individual users.” Yet they weren’t prepared for artists. “Ironically, the Graphics Coordinator Office at NASA actually became a kind of artist-rejection office in the early days of the Getaway Special program,” Davis relates. “It was the only office within NASA that was specifically mandated to deal with artists.” Finally, in 1982, Davis got his “Ruby Falls,” a piece “designed to produce artificial auroras in the atmosphere with pulses of electrons,” on a shuttle.

Art has always accompanied space exploration, and will undoubtably continue on our future expeditions.

Editor’s note: An earlier version of this article specified the wrong year for Leonardo‘s founding. This detail has since been corrected.