We now know a great deal about how the man who’s often blamed for the AIDS epidemic saw himself and his community. That’s important. 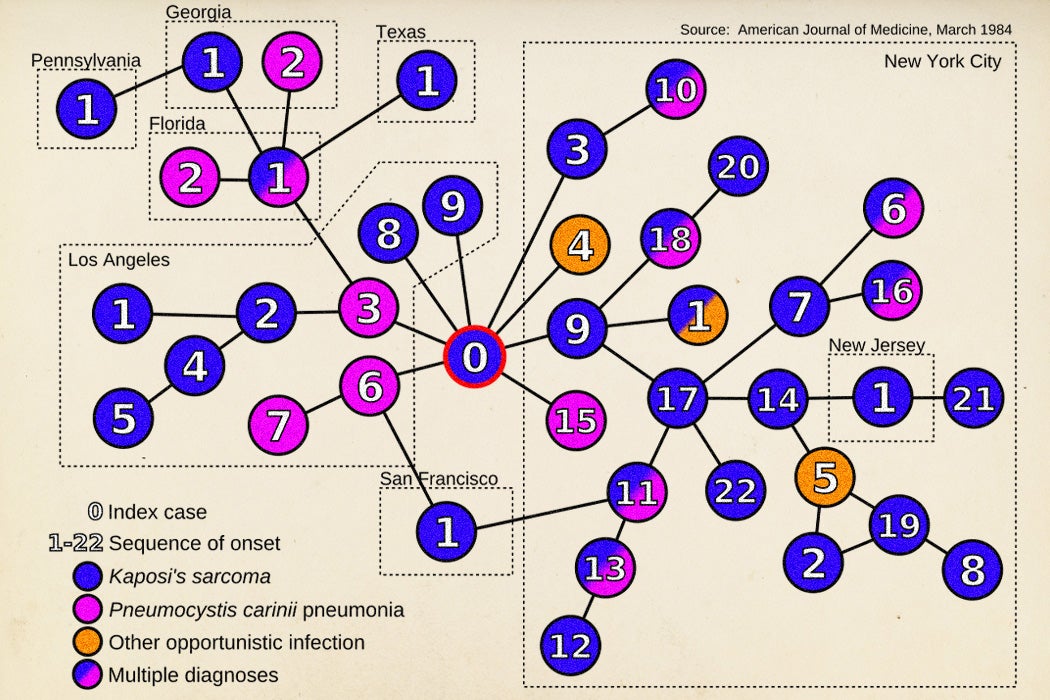 A graph of the early onset of AIDS from the alleged index case of Gaëtan Dugas, aka "Patient Zero".
via Wikimedia Commons
By: Madeleine Compagnon
3 minutes
Share Tweet Email Print

On October 6, 1987, five years after the Centers for Disease Control produced the first substantial evidence that a sexually transmissible agent was causing a new and often fatal disorder among gay men, the New York Post revealed the identity of “Patient Zero” on its front page. “THE MAN WHO GAVE US AIDS,” it claimed, was a Canadian flight attendant named Gaétan Dugas, whose frequent sexual encounters and travels across the country had “triggered the ‘gay cancer’ epidemic in the US.”

Much has been written since about Dugas and his supposed refusal to obey the recommendations of public health officials in the early 1980s. So much so, in fact, that the term “Patient Zero” has come to nullify Gaétan Dugas’s own experience of the epidemic. Science historian Richard McKay was able to reconstruct parts of the life of the man behind the myth in the extensive archives of journalist Randy Shilts.

Shilts was author of the popular, and controversial, book …And the Band Played On, a history of the early years of the AIDS epidemic, and the source of the myth. Shilts, McKay found, had drafted his proposal for a book on AIDS in May 1985 while reporting full-time on the epidemic for the San Francisco Chronicle. Devastated by the toll it was taking on his adopted hometown, and convinced that homophobia was impeding an effective response, he wanted to show that people with AIDS “are flesh-and-blood people with real names, […] to bring home the reality of the epidemic and make it far less frightening.”

Dugas received his initial diagnosis of Kaposi’s sarcoma in May 1980, months before it was identified as a major symptom of the newly emergent syndrome.

In the book, Dugas is one of fifty-four real people—patients, doctors, researchers, and politicians—in Shilts’s month-by-month, and sometimes day-by-day, chronicle of the early years of the epidemic.

By looking through Shilts’s meticulous notes and conducting his own original research, McKay retraced the steps that led Shilts to Dugas and adds complexity—and humanity—to Shilts’s portrayal.

Dugas received his initial diagnosis of Kaposi’s sarcoma in May 1980, months before it was identified as a major symptom of the newly emergent syndrome. Over the next two years, as information emerged about AIDS, he became well acquainted with the limited medical literature on his condition. McKay finds evidence that Dugas subscribed to an alternate theory circulating at the time: the “immune overload” or “multifactorial” theory, which held that repeated exposure to viruses, infections, sperm, and recreational drugs could bring about the collapse of the immune system.

In 1982, Dugas provided researchers from the CDC with the best early set of records for contact tracing, seventy-two names of his previous sexual contacts. The quality of this data placed him at the center of a cluster diagram of interconnected cases, thus making him Patient “Zero.” (In fact, the zero was an alphabetical “O,” standing for “outside of California.”)

Dugas’s friends told Shilts poignant stories of how, once KS became a visible signifier of AIDS, Dugas endured fierce discrimination, in San Francisco and later in Vancouver, where he lived for most of 1983. Years later, those same friends told McKay of their shock when Dugas, almost four years after his death, became once again a victim of the media’s ignorance and fear. (McKay expanded his research into a book-length study, which has also been adapted into a documentary film.)

As Band vividly illustrates, the early years of the AIDS epidemic were marked by dramatic shifts in the terrain of scientific and medical understanding of the disease, something that Dugas experienced dramatically throughout his illness. Ideas about the transmissibility and cause of AIDS were later portrayed to be more self-evident than they had been at the time.

"Patient Zero": The Absence of a Patient's View of the Early North American AIDS Epidemic
By: Richard McKay
Bulletin of the History of Medecine
Johns Hopkins University Press

What Happened to U.S. Public Health?

After the Civil War, support for public health measures was high. Now, some people blast them as part of the "nanny state."