Will Society Remember the Pandemic’s Heroes?

If history is any guide, probably not. 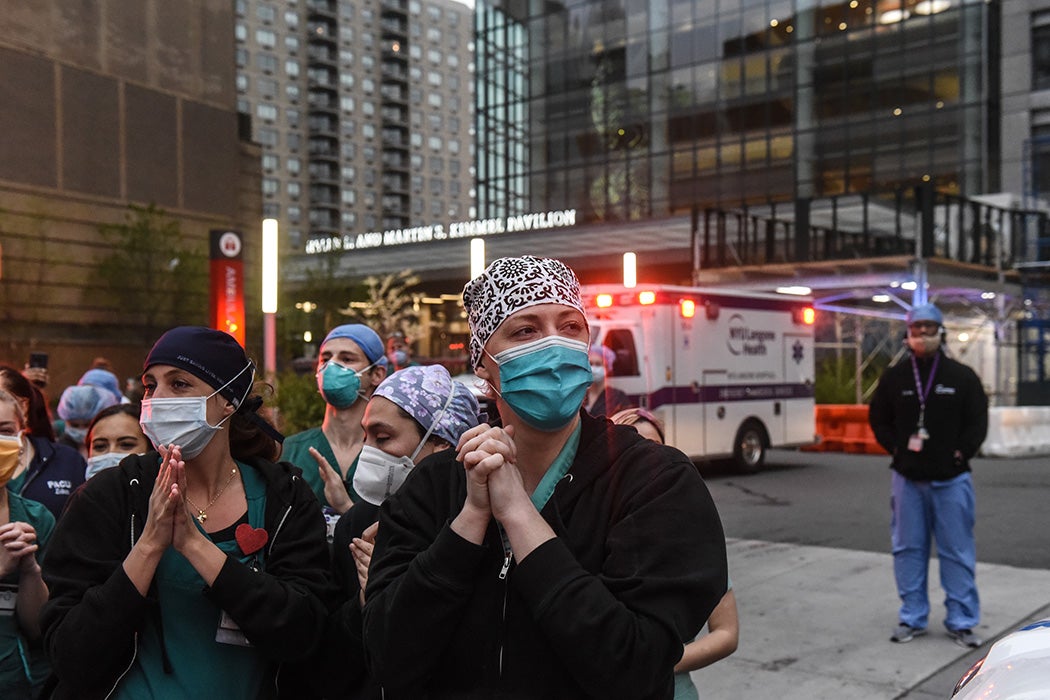 Since late March, every evening at 7 PM, an eerily quiet New York City erupts in applause, a small gesture of appreciation for “frontline workers,” not just the doctors and nurses pulling 12-hour shifts in crowded and busy emergency rooms, but the cashiers at grocery stores, the home care aides tending to elderly loved ones, the Uber drivers ferrying people to urgent care.

These people keep society running. They’re also among the lowest paid, and their jobs are among the most precarious and least valued. One in seven “essential workers” does not have health insurance, and one in three lives in a household that makes less than $40,000 a year, the Atlantic reported.

That’s why there has been a growing demand that we do more than simply give these people a proverbial pat on the back. “Some of the workers we’ve left to languish in low-paid and insecure jobs are the very ones we cannot live without. It’s not just time to be grateful. It’s time to make amends,” argued one commentator in the Financial Times. But history suggests that, far from becoming a driving force for deep, long-lasting change, gratitude for the sacrifices people make at times of national crises can be shallow and short-lived.

When the U.S. entered World War II, a huge labor shortage meant women were called upon to leave their homes and take up roles once occupied by men: they produced munitions, built ships, drove fire engines, and harvested crops. “Women were hired to do ‘men’s jobs’ during the war on a scale unparalleled before or since,” Ruth Milkman, a sociologist of labor, wrote in 1982. As a direct result of their efforts, the world of work would be profoundly and irrevocably altered, opening up women’s access to higher-paying occupations—or so the legend goes. “When it was all over, they found that their selfless contribution to the war had changed the lives of American women forever,” James J. Kimble and Lester C. Olson wrote, summing up the predominant view among historians in the decades following the war.

Bringing about lasting change, it seems, will require more than just fuzzy feelings of appreciation for essential workers.

This interpretation is neat and uplifting, which may explain its persistence. Rosie the Riveter, the symbol of female economic empowerment, stepped up. Her sacrifices would not be forgotten. Except that they largely were, as historians and sociologists have since demonstrated. “Women were almost always paid less than men for equal work, and, near the end of the war, they faced tremendous pressure to return their jobs to war veterans,” Kimble and Olson pointed out. “Rosie the Riveter, it seems, was more legendary than historic.”

Take the automotive industry as an example. Six months before the U.S. entered World War II, 31,600 women worked in automobile plants and factories, accounting for just 5.4% of the workforce. By October 1943, their numbers had increased to almost 200,000, representing more than one quarter of the industry. But once the war was over, that proportion fell to 10%. It wasn’t that women wanted to give up these well-paid roles. In her 1978 research into the wartime mobilization of American women, Leila J. Rupp noted that around half of those who had been housewives before the war, and three-quarters of those who had been in school, wanted to carry on working after the conflict ended.

But as Sherrie A. Kossoudji and Laura J. Dresser found when they analyzed employee records from the Ford Motor Company, women weren’t given that opportunity. “They were demoted to janitorial work or given increased work loads or new jobs with reduced break-in periods,” they wrote. “Most commonly, however, women were transferred to third or swing shifts that their schedules would not allow and so had to ‘quit’ their jobs.”

Will history repeat itself when it comes to how we treat the workers putting their lives on the line to keep shelves stocked, garbage cleared, and public transport running? Collective amnesia already seems to be setting in. Grocery stores that had implemented “hero bonuses,” small increases in pay for staff working through the pandemic, have started rolling them back, even as the risk to their workers remains essentially the same.

Bringing about lasting change, it seems, will require more than just fuzzy feelings of appreciation for essential workers. “It has nothing to do with showing respect,” Harvard economist Claudia Goldin told me. “It’s all about supply and demand.”

In 1991, Goldin’s research called into question the previously accepted idea that World War II permanently transformed women’s labor. “The rhetoric of wartime mobilization led many to believe there was real change,” she wrote at the time. In fact, the war’s “direct influence appears considerably more modest” than previously believed, she concluded.

That doesn’t mean that the world of work didn’t change dramatically for women in the postwar era. But these transformations didn’t come about in recognition of the sacrifices women had made. “There is mounting evidence that the wide-ranging shift in women’s economic role after World War II was primarily due to longer-run factors, such as the rise of the clerical sector and increased education for all Americans,” Goldin found in her 1991 paper. She later reaffirmed this finding in a piece of research she carried out with Claudia Olivetti in 2013.

This, Goldin thinks, might offer some clues as to how to improve conditions and compensation for those earning poverty-level wages on the frontlines of the coronavirus pandemic. “We have to change the jobs. We have to make them more skilled,” Goldin said. “That way people doing them will earn more.”

Just as a new postwar service economy called for legions of qualified women, the post-COVID world offers an opportunity to shake up the unskilled job market. “If all I do is take a patient to the bathroom, I’m doing something that doesn’t require very much training,” Goldin explained. “But if I take them from their bed to a dialysis machine and plug it in, and if I am capable of attaching an IV and giving the patient intravenous antibiotics, I’m highly skilled, and it’s something I’d have to be trained for and certified to do.” Goldin conceded that, if such an overhaul of education, training, and work sounds daunting, that’s because it is. “There are very few important questions where the answer is: wave a magic wand.”

Feelings of gratitude for what low-wage workers have sacrificed during this pandemic, in other words, will not be enough to fuel change on the level required. “We say we appreciate what these people are doing,” Goldin pointed out. “But in the same breath we say, ‘Well I don’t earn that much, so I can’t afford to have someone take care of grandma and pay them $60,000 a year.’ Everyone is speaking out of both sides of their mouths.”

If America’s most essential workers want change, they will have to demand it—something many have already been doing. “A lot of labor organizing is happening right now,” Milkman told me, “and that could make a big difference.” The campaign to increase the federal minimum wage, for example, has gained momentum, a move that public policy scholars have found could put a dent in poverty levels. And thanks to strikes by workers calling for safer conditions, paid sick leave—which scholars have argued is good for the health of both low-wage workers and the economy—might actually become a policy priority.

The coronavirus crisis has laid bare the difficult and dangerous working conditions so many Americans endure, but the problem predates the pandemic. Writing in the summer of 2008, before the start of a global recession that would stifle wages for more than a decade, Heather Boushey and Shawn Fremstad found that, adjusting for inflation, America’s lowest earners had seen barely any pay increase since 1979. It would be naive to think that a newfound appreciation for the workers who keep America running might, by itself, solve such long-standing problems.

That doesn’t mean change won’t come. Moments of huge upheaval have always created opportunities to rethink the way we run society. The UK’s National Health Service, the world’s second-largest single-payer healthcare system, was born in the aftermath of World War II, part of the government’s plans to create a fairer post-conflict Britain. But history suggests that these changes don’t come without a fight. “What the post-war transition illustrates is that this is a terrain of struggle,” Milkman said. “The outcome is up for grabs.”