Why Do We Have Prisons in the United States?

The Enlightenment brought the idea that punishments should be certain and mild, rather than harsh with lots of pardons and exceptions. 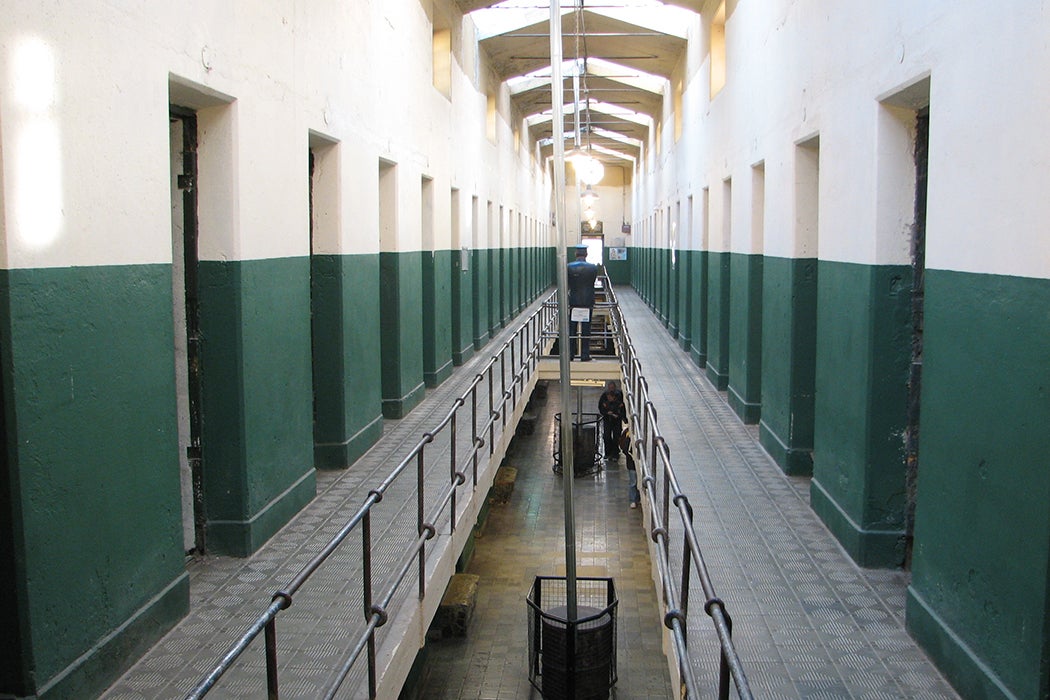 What is prison for? That’s a question a growing movement is asking as it looks beyond reforming prisons and sentencing laws, and imagines abolishing incarceration altogether. To think about what that might look like, it’s worth considering how the U.S. prison system began, as historian Jim Rice did in his analysis of an early Maryland penitentiary.

Maryland based its criminal law on English precedent, which meant terrifying punishments like hanging for minor theft, but also selective enforcement of the penalties with frequent pardons that demonstrated the mercy of officials. But where English lawmakers feared poor migrants wandering the country, Maryland’s upper classes needed more laborers than they could find. So, in place of the death penalty, thieves in the state were typically lashed and fined, keeping them alive while plunging them into debt. Those who couldn’t pay might be sold into servitude.

Then, in 1789, as Baltimore grew from a village to a city desperately in need of public works crews, the state passed the “Wheelbarrow Act.” This made most serious offenses punishable with hard labor on roads and the Baltimore harbor—up to seven years for free men or 14 for enslaved men.

From the start, the penitentiary system didn’t fulfill reformers’ dreams.

But the late eighteenth and early nineteenth century was an era of criminal justice reform on both sides of the Atlantic. The Enlightenment brought the idea that punishments should be certain and mild, rather than harsh with lots of pardons and exceptions, and that they should relate only to the crime, not the status of the person being punished. This also offered a more formal way to address crime in growing urban areas where officials could no longer respond to lawbreaking based on personal familiarity with the participants in a dispute.

In 1809, Maryland joined the growing ranks of U.S. states and European countries punishing crimes at penitentiaries. As the word suggested, the theory behind the institutions was that inmates could be induced to repent and reform. Not surprisingly, Maryland determined that a key tool in this project was “labour of the hardest and most servile kind,” including textile work, nail-making, and housekeeping. And while reformers expected penitentiaries to provide religious education and tailor work assignments to the goal of character improvement, in practice they were geared toward the fiscal needs of the institution, which the state expected to be self-supporting.

From the start, the penitentiary system didn’t fulfill reformers’ dreams. But the system made sense to officials who needed to keep order in bustling cities and supply labor to growing industries. The question today is what role prisons fill for the people who support them, and what alternatives might work better for the communities that bear the brunt of punishment.

"This Province, so Meanly and Thinly Inhabited": Punishing Maryland's Criminals, 1681-1850
By: Jim Rice
Journal of the Early Republic, Vol. 19, No. 1 (Spring, 1999), pp. 15-42
University of Pennsylvania Press on behalf of the Society for Historians of the Early American Republic