Why Do Police Use Tear Gas When It Was Banned in War?

The development of chemical warfare around the time of World War I led to the use of tear gas as a weapon by civilian police forces. 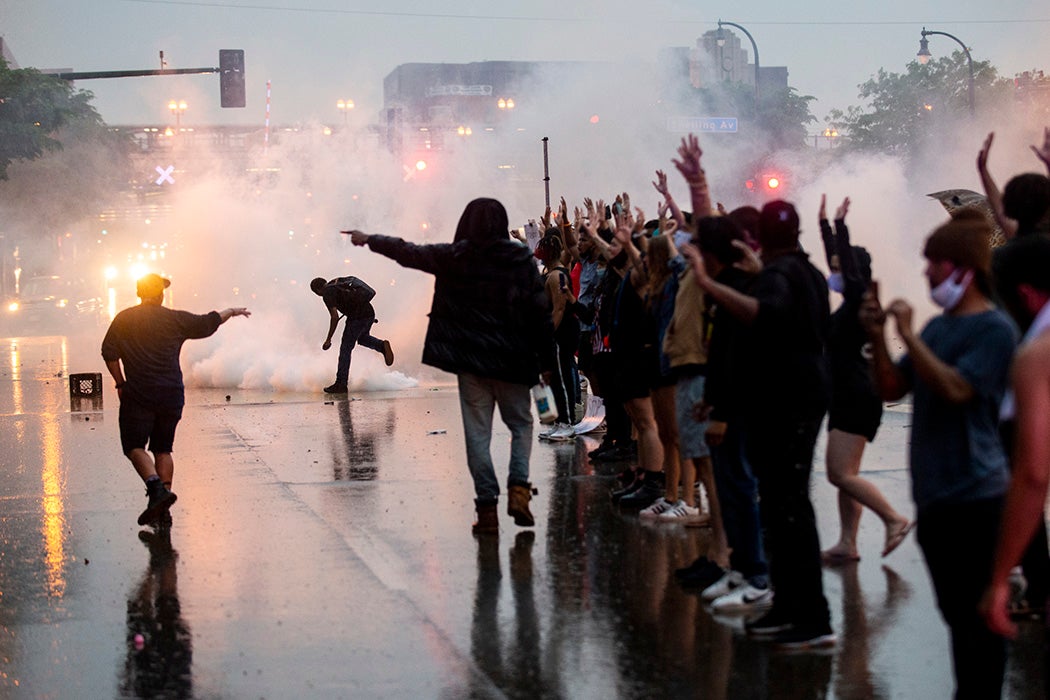 Tear gas is fired at protesters demonstrating against the death of George Floyd outside the 3rd Precinct Police Precinct on May 26, 2020 in Minneapolis, MN.
Getty
By: Allison C. Meier
4 minutes
Share Tweet Email Print

As antiracism protests calling for defunding the police and ending state-sanctioned brutality against Black bodies have spread around the globe, law enforcement has responded with aggressive crowd control measures, including the extensive use of tear gas. This comes despite public health experts warning that the physical effects of tear gas could exacerbate the spread of coronavirus and potentially weaken a body’s resistance to infection.

“Tear gas” is an umbrella term for riot-control agents with chemical irritants, but the name is a misnomer. As researchers Pierre-Nicolas Carron and Bertrand Yersin explain in the BMJ: British Medical Journal, it’s “not a gas at all, but a toxic chemical irritant in the form of powder or drops mixed to variable concentrations (1–5%) in a solvent, and delivered with a dispersion vehicle (a pyrotechnically delivered aerosol or spray solution).” The immediate effects of these agents are burning sensations on the skin, choking, coughing, tearing, and sometimes nausea.

There was nothing “more liable to cause panic than the idea of being choked…the dread of being slowly strangled.”

Tear gas was researched during the World War I era, as part of the large-scale use of chemical warfare. The psychological impact of these new, invisible weapons was powerful. Historian Edgar Jones, in War in History, writes that France’s consultant physician for gas cases said there was nothing “more liable to cause panic than the idea of being choked…the dread of being slowly strangled.”

But the forerunners of chemical weapons actually came earlier. As historian Micol Seigel explains in The Global South, French chemists had been developing tear gas before the war “for police suppression of domestic dissent.” The weapon went from being considered “military technology” during the war to being “embraced again by police to combat protest immediately following the end of hostilities.” In the United States, the Chemical Warfare Service (CWS), established during the war and nervous about its peacetime status in the War Department, would promote the civilian use of tear gas.

The years after World War I saw many instances of public violence—including the “Red Summer” of 1919, in which vicious attacks by whites against African Americans occurred across the country. Law enforcement agencies saw in tear gas an opportunity to shift control from the masses to a few police officers. An early inquiry to the CWS came from A. D. Porter of the New York Police Department, who wrote that despite his concerns with their health effects, “these gases might be an efficient agency in suppressing disorder,” as long as “public opinion would tolerate the use of it.”

According to historian Daniel P. Jones, writing in Technology and Culture, the CWS wanted to “demonstrate the value of their research program” so that the CWS could train police in the use of tear gas, which, it hoped, would “dispel the public’s fear and revulsion of gas warfare.” Although the War Department had banned the use of tear gas by federal forces, there was no such ban on police, so that by “the end of 1923, over 600 cities had been equipped with tear gas, and several reports of its use had already appeared.”

The CWS’s chief in the 1920s—Major General Amos Fries, a fervent anticommunist—recognized in this era an opportunity to rebrand tear gas for civil riot control. Political scientist Sean P. Giovanello writes in the Journal of Strategic Security that when the Geneva Protocol was being signed in 1925 to prohibit chemical weapons, Fries lobbied to stop its ratification by the U.S. Senate, arguing in favor of “the use of tear gas for riot control.”

The CWS secured not only its own survival in the interwar years—its branch of the U.S. Army today is known as the Chemical Corps—but also the endurance of tear gas as a police weapon. That success encouraged its adoption around the world.

As a police tool, the current deployment of tear gas reinforces the effect that made gases so powerful in World War I: fear. With reports showing tear gas being used on peaceful protesters, that fear is itself a deterrent by law enforcement on public demonstrations. Given legitimacy by the CWS in the interwar period, tear gas provides police with a chemical weapon that is no longer permitted in war.

Management of the effects of exposure to tear gas
By: Pierre-Nicolas Carron and Bertrand Yersin
BMJ: British Medical Journal, Vol. 338, No. 7710 (27 June 2009), pp. 1554-1558
BMJ
Terror Weapons: The British Experience of Gas and Its Treatment in the First World War
By: Edgar Jones
War in History, Vol. 21, No. 3 (July 2014), pp. 355-375
Sage Publications, Ltd.
On the Critique of Paramilitarism
By: Micol Seigel
The Global South, Vol. 12, No. 2, Men with Guns: Cultures of Paramilitarism and the Modern Americas (Fall 2018), pp. 166-183
Indiana University Press
From Military to Civilian Technology: The Introduction of Tear Gas for Civil Riot Control
By: Daniel P. Jones
Technology and Culture, Vol. 19, No. 2 (Apr., 1978), pp. 151-168 (18 pages)
The Johns Hopkins University Press and the Society for the History of Technology
Riot Control Agents and Chemical Weapons Arms Control in the United States
By: Sean P. Giovanello
Journal of Strategic Security, Vol. 5, No. 4 (Winter 2012), pp. 1-18
University of South Florida Board of Trustees 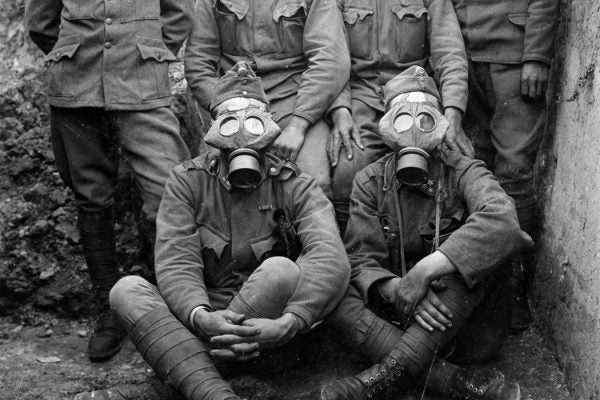 Fritz Haber was a chemist who made discoveries that improved global agriculture… but also helped spawn the modern era of chemical warfare.