Who Were the Montford Point Marines? 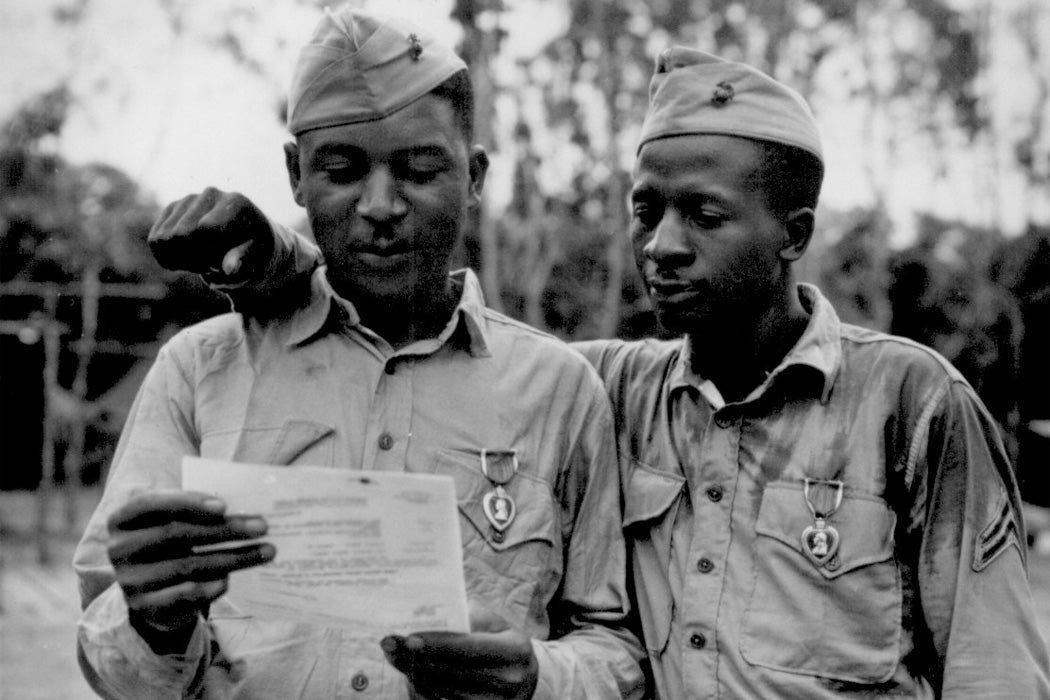 The year was 1941. The United States was preparing to enter World War II, and it needed recruits. But President Franklin D. Roosevelt faced a problem. Hiring discrimination based on race was still the norm in the defense industry, but civil rights leaders were organizing for change. A. Philip Randolph—who had organized and led the first African-American labor union, the Brotherhood of Sleeping Car Porters—was planning a march on Washington to pressure Roosevelt to open up the defense industry to blacks. But the president resisted. The Commandant of the Marine Corps, among other officers, was vehemently opposed. As the march grew closer—and under pressure from his wife Eleanor—Roosevelt conceded. On June 25, 1941, just a week before the march was set to take place, the president signed Executive Order 8802, prohibiting racial discrimination in the defense industry or in government. At last, all branches of the U.S. Armed Forces were open to African Americans.

“There is evidence,” Executive Order 8802 states, “that available and needed workers have been barred from employment in industries engaged in defense production solely because of considerations of race, creed, color, or national origin, to the detriment of workers’ morale and of national unity.” In other words, the order recognized a need to prevent discrimination, but made no mention of ending the military’s standing policies of segregation.

To the Commandant of the Marine Corps, Major General Thomas Holcomb, the Montford Point Marines were a disgrace. “If it were a question of having a Marine Corps of 5,000 whites or 250,000 Negroes,” he said in 1942, “I would rather the whites.”

Recruitment of black men for the Marine Corps started on June 1, 1942, a year after the order had been signed. The Corps looked specifically for men with the skills needed to build the facilities where black Marines would train. They quickly filled the 900-man quota, and that summer the first class of black recruits arrived at Montford Point, in North Carolina. “When you got to the gate it was nothing there,” said St. Louis native Walter Thompson Jr. The training grounds were just a few miles away from Camp Lejeune, built that year for $14 million, where the white recruits were trained. It would be another seven years before the federal government intervened to prohibit racial segregation.

When Montford Point was first established, everyone in charge was white. The Corps’ goal was to train Montford Marines to take over the training of future black recruits. By late 1943, the staff had chosen black Marines to replace the white instructors. “When we took over as weapons instructors and so forth,” Archibald Mosley, a Montford Pointer, said in a previous interview, “we [blacks] were worse on our own than the whites were on us when they were in charge. I think the whites realized that, well, now we don’t want to act like we don’t like blacks or that we are bigots or so forth.”

Colonel Samuel A. Woods, Jr., was the first commander at Montford Point and mandated that black recruits receive the same training as the white recruits just down the road. “I have found that any soldier anywhere will respond to his duties if treated like a human being. The same is true of the Negro Marines as of all other persons in the service,” he said.

And Lieutenant Colonel Joseph Carpenter, who trained at Montford Point in 1943, recalled that black recruits were relieved when black drill instructors began to replace the white ones, hopeful they wouldn’t be as tough. The opposite turned out to be true. “They, the blacks, were determined to make us succeed and to be real Marines. And that was their main goal, was to be sure that we were gonna be better than everybody else.”

Civil rights were gained not in the name of liberty, but of war.

It wasn’t the first time black servicemembers were called on to fight for the U.S. Until partway through the War of 1812, when demand for servicemembers increased, the Navy banned the recruitment of African Americans. During the American Revolution and the Civil War, slave owners would send slaves to serve in their stead. In the Civil War alone, more than 180,000 African Americans served, some of whom were former slaves and fugitives who fled to the North and fought for the Union. The ramp-up to the Second World War demanded a rapid and dramatic increase in enlistment. More than 1 million African Americans were called to service, and of those 835,000 went to the Army. “The exigencies of war demand the increasing use of Negroes in the armed services and the adjustment of policies to permit this,” John W. Davis wrote in the Journal of Negro Education in 1943. Civil rights were gained not in the name of liberty, but of war. 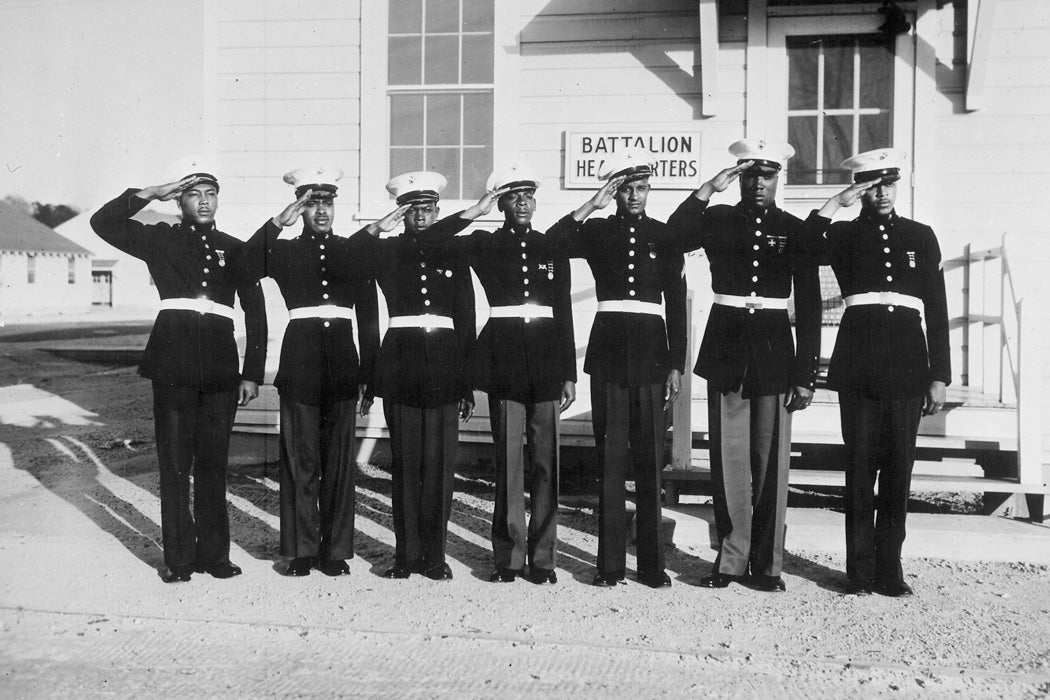 A group of Montford Point volunteers in their dress uniforms 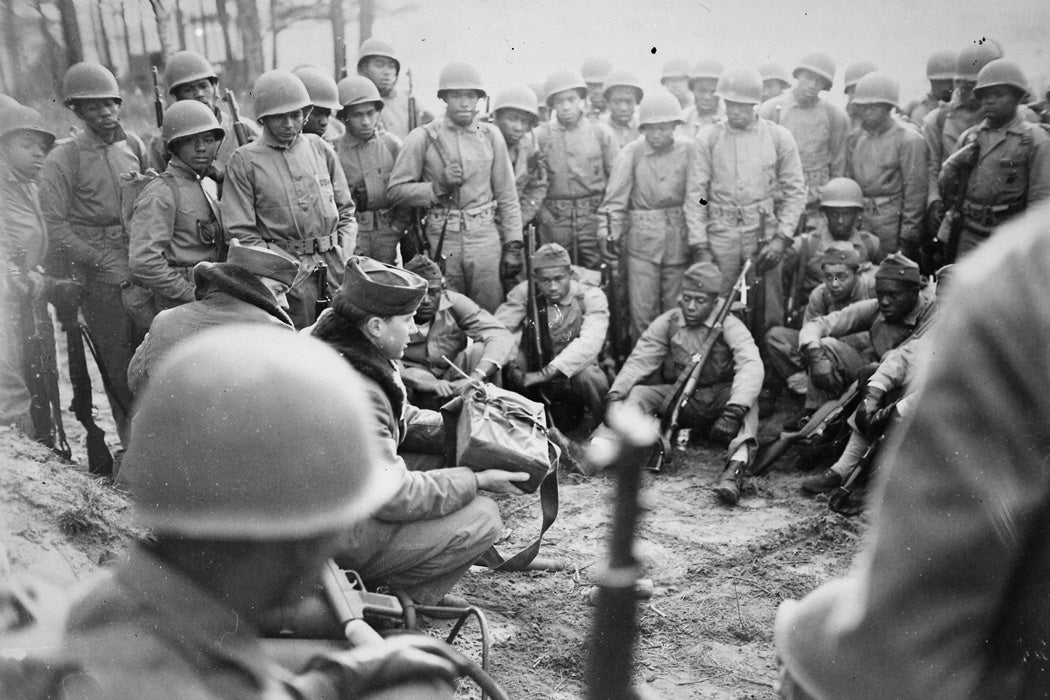 Marines receiving instruction in the Demolition Course at Montford Point 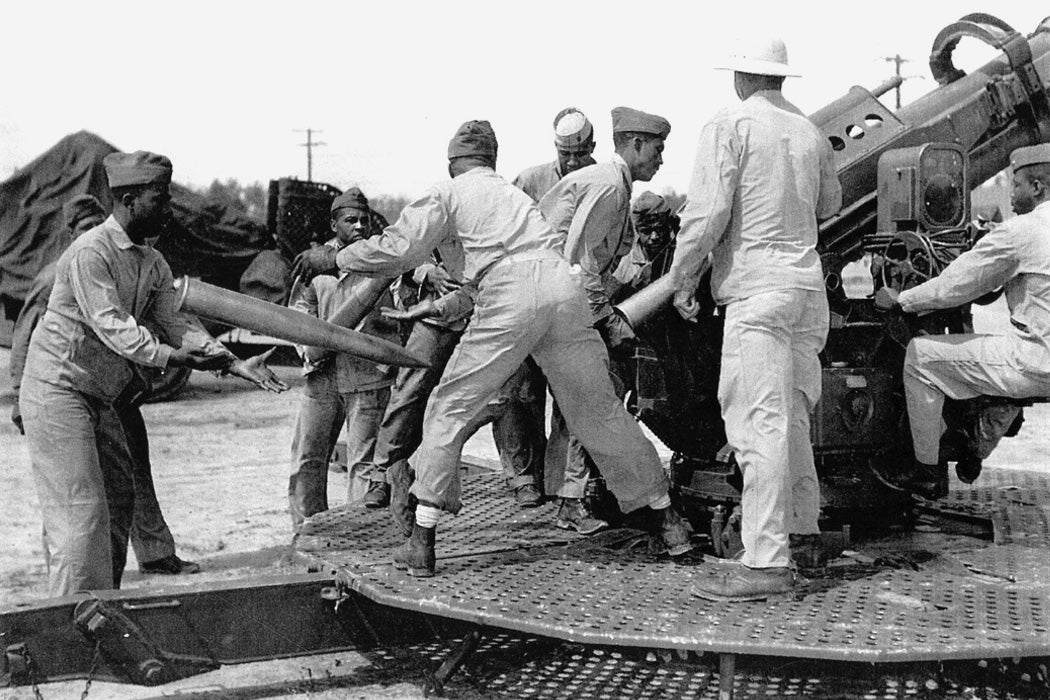 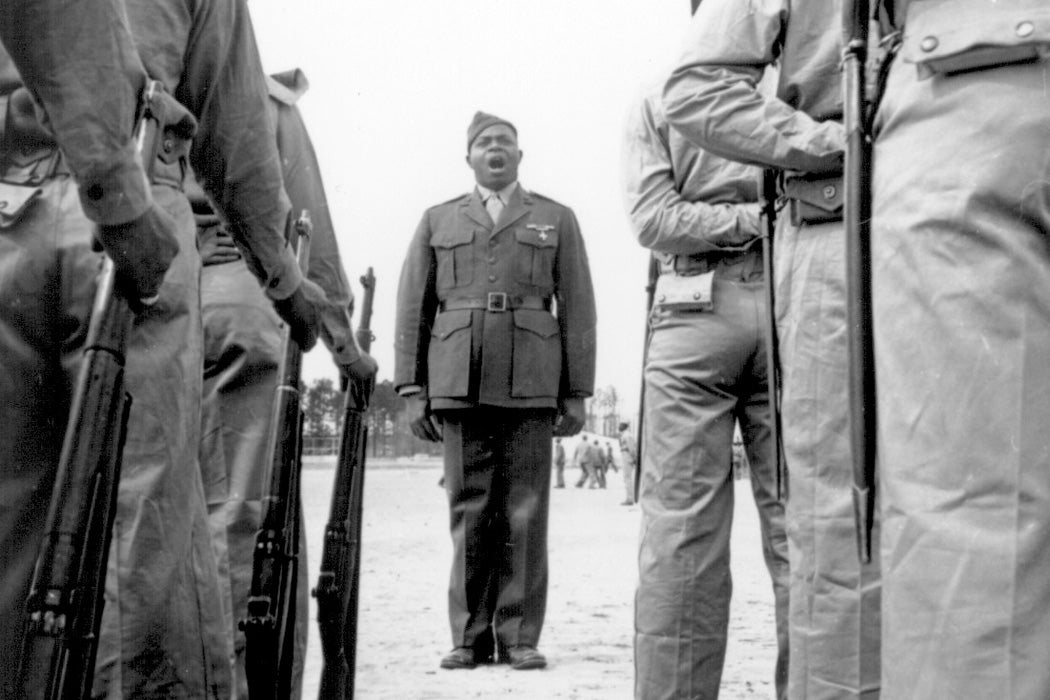 A platoon of "boot recruits" listen to their drill instructor 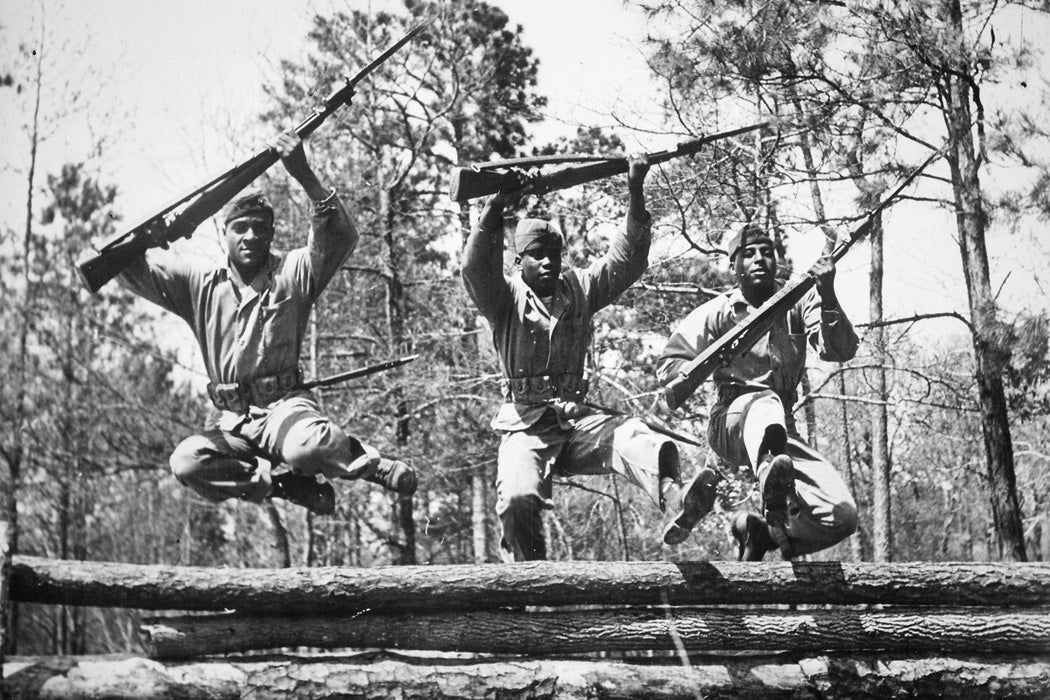 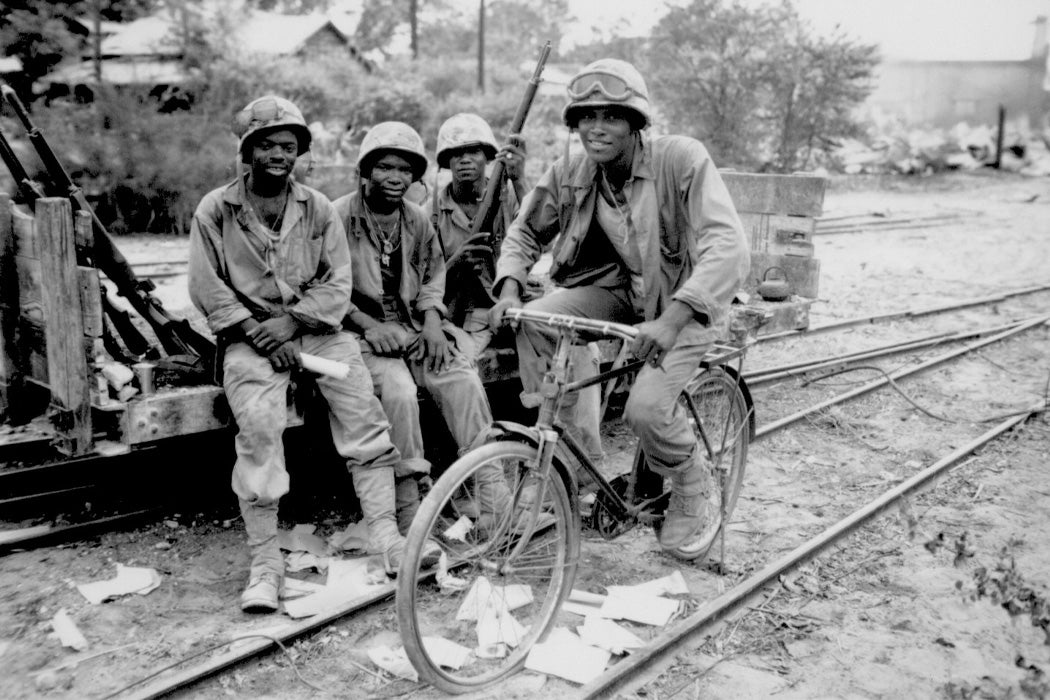 By 1944, 18,000 black Marines were serving. Of those, 12,000 were deployed overseas. Between 1942 and 1949, about 20,000 African-American Marine recruits trained at Montford Point. “When the Marines finally allowed black volunteers to enlist, they set specific limits on how many could join the corps and what jobs they could do,” an article from Black Camera noted. “One thing they weren’t allowed to do: give orders to white Marines.”

The Marine Corps, unlike the Army, did not allow African Americans to become officers at the beginning of the Second World War. When Frederick C. Branch, one of the early Montford Pointers, expressed interested in going to the Marine Corps’ Officer Candidate School (OCS), he was told to forget about it. He qualified to become an Army officer, but remained committed to the Corps and instead deployed to the Pacific. He hoped that his service abroad would increase his chances of getting into OCS, believing that merit might override race. His path would not be that easy.

While he was on deployment, a colonel noticed Branch’s high-quality work and his work ethic. The young Marine continued to excel over the next year, and the colonel approved his OCS application, allowing Branch to apply. He was denied, but remained undeterred. Branch set out to make friends in high places, hoping that they would support his efforts to become an officer. Sure enough, after another stint of hard work for the right people, he once again sought admission to OCS. This time, he was admitted. In November 1945, Branch became the first African American to earn a commission in the Marine Corps.

“Sure, black Marines were proud when they heard the news about Branch… I mean there was no parade or anything like that, but yes, the black Marines I knew were happy when they learned that one of our own had been commissioned as an officer,” Albert Carl Jackson said.

Little by little, cracks began to grow in the Corps’ tradition of racial segregation.

It’s not a new or especially novel idea that exposure to people of different backgrounds helps break down stigma and decrease discrimination. Representation, in the form of Frederick C. Branch, made the idea of becoming an officer seem more attainable for black Marines. Little by little, cracks began to grow in the Corps’ tradition of racial segregation. Branch was recalled during the Korean War and put in charge of white and black troops. When a white Marine was asked by his father how he could follow the orders of a black man, the Marine responded, “That’s my commanding officer.”

Later in his life, Branch was honored for his accomplishments. In 1997, OCS named a building on the Quantico campus in Branch’s honor. In 2001, 56 years after he was commissioned, the Corps presented Branch with the Mameluke sword, which all Marine officers traditionally wear for formal occasions. A group of African American Marines learned that, during his time in the Corps Branch, he had not, for reasons that aren’t clear, been issued a Mameluke sword, and so they sought to remedy that. The Senate twice passed resolutions honoring Branch and his achievements—one during his life, in 1995, and the second in 2005, after his death.

In many ways, black service members’ struggle to secure equal treatment and opportunity in the Armed Forces resembles the fight servicewomen endure now, particularly in the Marine Corps, the last remaining branch to segregate boot camp by gender. The first woman Marine enlisted in 1918. For years, male Marines have been made to repeat ditties with sexist slurs and told by drill instructors that female Marines were inferior. The women are housed in a separate corner of the military installation—out of sight and easy to “other.” Today the Corps is trying to respond to pressure to integrate, but action has been slow.

Some defense officials have made clear that, for them, opening all military occupational specialties to women feels like a concession. Until 2013, women were prohibited from serving in ground combat. In 2016, all military occupational specialties, including combat arms, opened to women. But as recently as September 2018, Defense Secretary James Mattis said that the jury was still out on whether women should serve in combat.

Racial segregation within the Armed Forces was finally banned by executive order shortly after World War II. Once again, A. Philip Randolph played a role. In 1947, he began pressuring President Harry Truman to desegregate the military. As he had with Roosevelt six years before, Randolph applied pressure to Truman, stating that he would organize a nationwide movement to resist the draft. In the run-up to the 1948 Democratic Convention, President Truman avoided taking real action to guarantee and protect civil rights. The Democratic Party was split: Would vocal support of civil rights alienate Southern voters? Or would avoiding taking a strong stand cede ground to the Republicans who, in 1940 and 1944, had a stronger civil rights platform than the Democrats? The party fell in line behind a stronger civil rights agenda. And in July 1948, President Truman signed Executive Order 9981, prohibiting segregation based on race in the military.

“It is essential,” the order states, “that there be maintained in the armed services of the United States the highest standards of democracy, with equality of treatment and opportunity for all those who serve in our country’s defense.” The order did not include a deadline, but it did state that integration should occur as quickly as possible.

The history of the Montford Point Marines remains largely unexamined, but the historian Melton A. McLaurin’s oral history is helping to remedy that. In the last chapter, “Legacy,” Herman Darden Jr., who joined the Corps in 1943, talks about the military’s progress in his lifetime. “In my lifetime,” he said, “I’ve had the privilege of meeting and talking to at least thirteen black generals. And when I stop and think that in 1943, when I saw a black with one stripe on, boy, I felt great. But when I saw all that brass, the generals and the colonels, and the majors and all, I cried.” 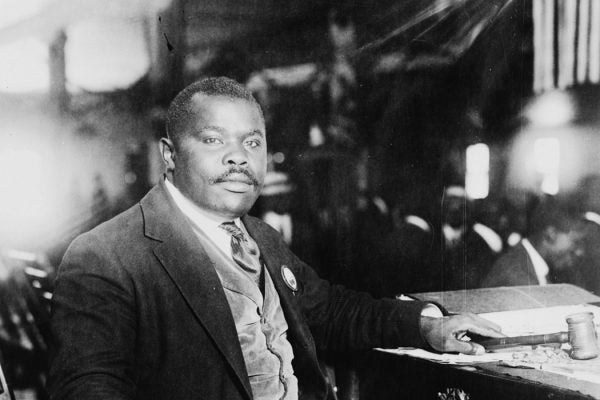