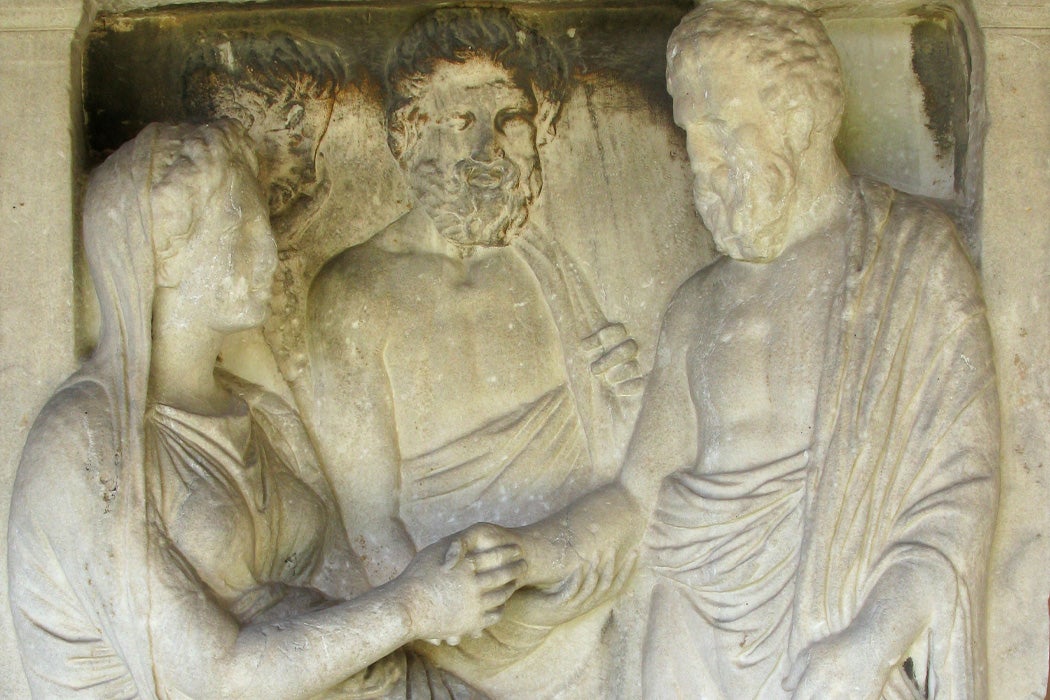 Ancient Greek funerary naiskos, from the grave of Agathon and Sosykrates, exhibited in the entrance Cloister of the Kerameikos Archaeological Museum (Athens).
via Wikimedia Commons
By: Ed Simon
2 minutes
Share Tweet Email Print

It’s fun to imagine Michelangelo’s Sistine Chapel painting of God and Adam as a depiction of the last few seconds before history’s first handshake. As it turns out, there is a touch of the divine about the vigorous shaking of somebody’s appendage upon greeting them. Michelangelo might not have been depicting a handshake, but ancient sculpture is replete with early representations of the practice, which the Greeks called dexiosis, roughly meaning “to take the right hand.”

The classical archeologist Janet Burnett Grossman, in her article “Funerary Sculpture,” published in The Athenian Agora, defines dexiosis as a “gesture symbolizing connectedness,” which isn’t too different from today. Sculptures often show mortals and gods communing through a handshake, and instances of them on graves and steles signify everything from marriage to peace between warring cities.

The art historian Jas Elsner writes in Classical Antiquity that “the earliest surviving examples on figured stelae” of dexiosis “probably date to the 420s.” And a team of archeologists encountered a relief depicting the Assyrian king Shalmaneser III with a Babylonian ruler in a “gesture of greeting between equals like the modern handshake” (check out “The Excavations at Nimrud (Kalḫu), 1962,” in the journal Iraq).

Greek stelae notwithstanding, handshakes have not always been standard. In America, handshakes were first popularized by the Quakers. The historian Michael Zuckerman writes in “Authority in Early America” (from Early American Studies) that Quakers scorned every “courtly gesture of subordination,” preferring the “practice of the handshake, extended to everyone regardless of station.” The gesture offered a fusion of democracy and the divine, the aristocratic bow replaced with the egalitarian handshake. This was something that Shalmaneser III understood: a handshake expresses fraternal equality.

For this monthly series from JSTOR Daily, we invite readers to submit their burning questions. If we choose your question, it will be published alongside related research housed on JSTOR.
Share Tweet Email Print
Have a correction or comment about this article?
Please contact us.
ancient historyart historyClassical AntiquityEarly American StudiesIraqThe Athenian Agora