Esquire, 1940: “Salads are really the man’s department… Only a man can make a perfect salad.” 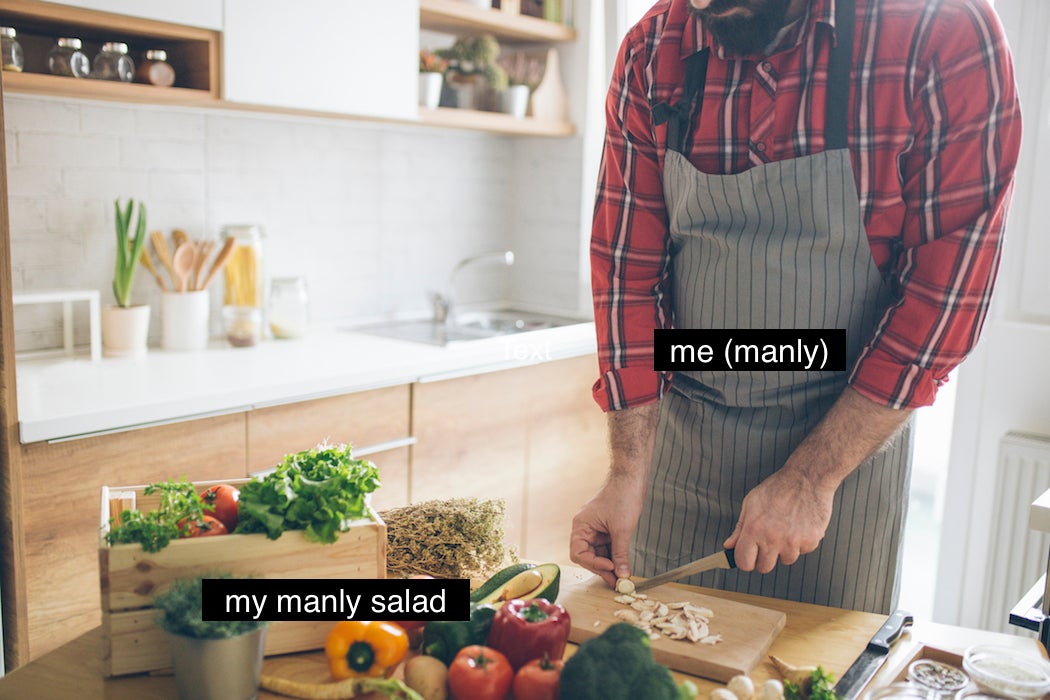 The differences between “women’s tastes” and “men’s tastes” are long entrenched in American cultural history. As the stereotype goes, meat is manly and women love salad.

Or is it that simple? A look back at the food writing directed at men in the period following the Second World War reveals a different relationship between men and salad. In this era, making and eating a salad wasn’t frilly and feminine, but was actually one of the most masculine things a man could do.

In a 1940 installment of his long-running Esquire cooking column “Man the Kitchenette,” Iles Brody writes: “salads are really the man’s department… Only a man can make a perfect salad,” which was “never sweet and fussy like a woman’s.” Given the right context, self-confidence, and ingredients, a man could transcend the girly boundaries of vegetables, reasserting his dominance in the kitchen and in his relationship to women. A growing body of instructional literature aimed to teach him how to do it.

The era of the manly salad was one of deep anxiety regarding gender roles and labor in American cultural life. In November 1958, Arthur Schlesinger, Jr., wrote a feature for Esquire about the “crisis of American masculinity” facing the nation. When it came to home life, he wrote, “the American man is found as never before as a substitute for wife and mother… The American woman meanwhile takes over more and more of the big decisions, controlling them indirectly when she cannot do so directly.” Esquire was a prime example (along with Playboy, which was launched in 1953) of media that promised to help men through the crisis and teach them how to regain their supposedly lost manhood.

The magazines included guides for dressing, grooming, dating, and—notably—cooking. Celebrity chefs, cookbook authors, and columnists instructed readers on the specific (and chauvinistic) traits of a freewheeling bachelor in the kitchen, creating a full portrait of escapism from the drudgery of breadwinning and nagging from the “little women” in men’s lives. Playboy and Esquire, the Americanist Katharina Vester writes in her 2015 book A Taste of Power, “showed that many of the tasks that were traditionally connoted with women’s authority and labor, such as cooking, could be easily taken over by men (who, if they set their minds to it, would also do a much better job).”

Salad lived at the dangerous intersection of masculinity and health.

“American women go berserk when it comes to salads,” the 1949 Esquire Handbook for Hosts proclaims. “They try so hard to be unique that in their zeal they really confuse things.” This approach was typical of cooking literature for men during this time; women’s cooking was denigrated as outdated and overwrought, while men’s cooking (even if men couldn’t cook) was celebrated at every turn. “Overall, the emphasis on male competence assured men that kitchen duties were simple tasks, not ‘real’ work at all, privileging the world of the workplace outside the home and trivializing the domestic realm of the kitchen,” the author Sherrie Inness writes in Dinner Roles, her examination of gendered cookbooks.

The kitchen became the battleground for this imagined war between the sexes, and food was presented as a tool for masculine control and power. Men’s cooking literature used a combination of misogynistic stereotypes, humor, and pep talks to encourage male readers into the kitchen with the confidence of a chef. Readers were continuously assured that they were manly enough on their own but could always be more masculine with the right assistance. In his 1950 novelty illustrated cookbook Wolf in Chef’s Clothing, Robert H. Loeb writes: “The purpose of this book is to enfranchise the male, to unshackle him from the role of refrigerator vulture, icebox scavenger, from being a parasitic gourmet forced to feed on the leftovers of female cookery.”

Similarly, Malcolm LaPrade assures readers in his 1946 cookbook, That Man in the Kitchen: “I promise you that you can become the envy of all your neighbors’ wives; you will not only make things like mother used to make, but far better… Furthermore, you will at last attain that complete independence of womenfolk which every red-blooded male desires.” This affirmation of freedom for male cooks ensured that men’s cooking would be differentiated from women’s, reaffirming the gendered division of labour in the home. In 1947’s A Man and his Meals, cookbook authors Fletcher Pratt and Robeson Bailey lay out the differences between how men and women cook: Women “eat with their eyes… or they eat with their minds, as among the accursed tribe of dieticians. Men eat because it’s fun… and as with any primitive form of fun, the closer they get to nature, the better they like it.”

Men’s cooking was almost always referenced as a hobby or a biological necessity; either men cooked for girlfriends (never wives) or whenever they got hungry. When men cooked for women, it was portrayed as an exercise in conquest. “Playboy’s recipes for gourmet chick bait insinuated that cooking reflecting elite tastes, expert knowledge, and upper-class income indicated virility and flashier playboy lifestyles, and would impress women sufficiently that they would succumb to the cook’s charms,” Vester writes. Wives, on the other hand, were always assumed to be cooking for their families first. Further, men’s kitchen activities were rarely described as family duties or healthy alternatives to eating rich restaurant foods. Inness writes that men’s cooking was often presented as “always a special event that should not be taken for granted.”

Instructional cooking literature also included sweeping generalizations about the vastly different tastes of men and women. In her 2003 book Manly Meals and Mom’s Home Cooking: Cookbooks and Gender in Modern America, the historian Jessamyn Neuhaus writes that “male taste” was limited to “virile” foods: “roasted meats, strong coffee, cakes, pies, and hot breads all passed muster for the male menu.” Manly foods were often described as “hunks” or “chunks” of meat and vegetables, emphasizing the lackadaisical attitude men supposedly had towards meals. This attitude also extended to dieting and health food. An Esquire dieting column in March 1957 told readers that they could “eat everything and change nothing” about their diets while simultaneously offering low-calorie and low-sugar menu planning options.

Salad lived at the dangerous intersection of masculinity and health. To combat any worries about femininity creeping in, salad-making instructions in men’s cooking literature were laser-focused on simplicity and sharp flavors. “Feminine food was sweet and cute; Jell-O salads were for you and your girlfriends, and meat was for your husband,” Neuhaus writes in her study of representations of gender and domesticity in the Journal of Social History. In direct opposition to gelatin salads or dainty lettuce cups associated with tea parties, a “man’s salad” involved a large wooden bowl seasoned with olive oil, roughly chopped lettuce, and a spicy or strong dressing. The Handbook for Hosts implores readers to only make a salad with “green leaves… seasoned with salt, pepper, oil, vinegar and mustard.” In her study of Brody’s columns, the scholar Elizabeth Fakazis writes in Gastronomica that his feelings on salad “cemented his distinction” from traditional women’s food writing, and therefore from femininity itself.

The man-conquers-the-kitchen approach to food writing became less fashionable in the 1970s, as more men did cook regular meals and the fantasy of the urban bachelor became less attainable. One of the last gasps of the mid-century manly salad appeared in Playboy’s Gourmet, a book collecting many of the food writer Mario Thomas’s cooking columns for the magazine. “When your back is turned, [a woman will] come up with prunes and cottage cheese or pea and walnut salad or an elaborate bowl of mixed greens tasting exactly like a bale of wet hay,” Thomas writes. “A good salad maker must have meticulousness, patience, cleanliness and a very alert sense of touch and taste. For some reason, it takes a man to master this really fine art.”

A half-century after the era of manly salad, a cultural fascination and unease remains entrenched in attitudes towards gender and food. Women still do the majority of food shopping and cooking in households, while high-meat diets may be linked to certain diseases. A 2016 ad for Dixie paper plates uses #SaladShaming to poke fun at traditional depictions of men’s tastes while nodding at the continued stereotypes that persist around femininity and salad.

Cookbooks reveal “the tenuousness of the domestic ideal.”

It’s clear in hindsight that this type of food writing is sexist and over-the-top, and it’s not clear that readers were following the instructions laid out before them. Esquire, Playboy, and their compatriots were selling readers a fantasy—one where white, middle-class men were the masters of their own destinies, not shilling for a corporation and trying to be happy in the suburbs with their unhappy wives.

Neuhaus writes that cookbooks reveal “the tenuousness of the domestic ideal.” Her focus is on women’s cookbooks and their embrace of the image of the breadwinner husband and the homemaker wife, chosen because it was safe—not because it was real. Similarly, cooking literature for men offered a particular hedonistic fantasy that belied the realities of many men’s lives.

Even the bastions of hedonism didn’t seem to be buying into it. “The key to the recovery of masculinity does not lie in any wistful hope of humiliating the aggressive female and restoring the old masculine supremacy… Masculine supremacy, like white supremacy, was the neurosis of an immature society,” Schlesinger wrote at the end of his 1958 piece. “It is good for men as well as for women that woman has been set free.” Gendered boundaries of taste are loosening, and the popularity of salads among men and women may mean that the future of eating greens might be free for everyone.