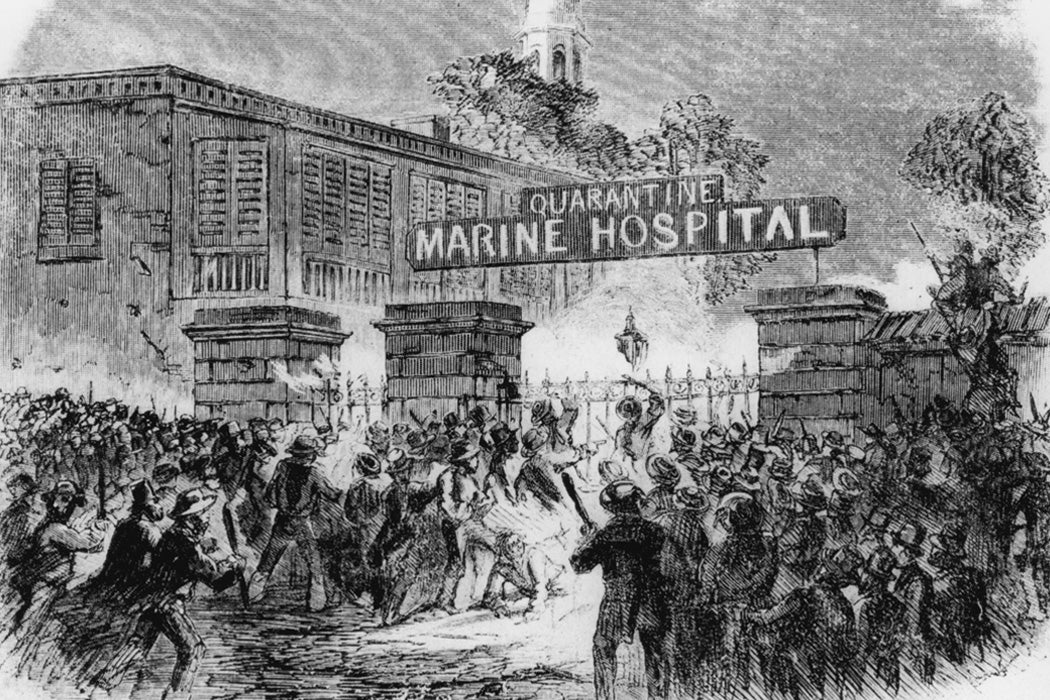 Quarantines are one “of humanity’s oldest defenses against infectious disease,” according to public health scholar Kathryn Stephenson. They also remain one of the most controversial instruments of public heath, raising questions of individual civil liberties and communal responsibility. People in quarantine aren’t happy, and sometimes the people right outside quarantine facilities aren’t happy either. Fear and ignorance about diseases and quarantines can be a combustible mixture. Stephenson’s history of the burning of the New York Marine Hospital in 1858 shows that NIMBY-ism is nothing new.

The state-sponsored New York Marine Hospital, familiarly called the Quarantine, opened in 1799. It was located on the northeastern shore of Staten Island, just a little south of where the Staten Island Ferry Terminal is today. The spot was picked because it was relatively isolated but offered easy access to the harbor. The island would not be a formal part of New York City until 1898, and in the nineteenth century, the island’s main industries were oystering and farming. Even by 1855, Staten Island only had a population of around 20,000, compared to 200,000 in Brooklyn and 630,000 in Manhattan.

A single case of yellow fever aboard a ship could put the all passengers and crew under quarantine for as long as six months.

During the 1850s, two million immigrants arrived in New York City, and some of them were beset with the contagious diseases shipboard-confinement fostered: yellow fever, smallpox, cholera, typhus (or “ship fever”). A single case of yellow fever aboard a ship could put all the passengers and crew under quarantine for as long as six months. There could be as many as eight thousand patients in the Quarantine over the course of a year. Before vaccines, as Stephenson notes, it was dangerous work for the staff: “Funeral expenses for employees was a category in the accounting books.”

Things came to a boil in 1858. The local Board of Health resolved “that this Board recommend the citizens of this county to protect themselves by abating this abominable nuisance without delay.”

A mob, having prepared for days in advance, stormed the walls and set fire to buildings on the night of September 1st. Shots were fired. Two people died that night. The local fire companies arrived but said their hoses were cut. With nothing to stop them, Staten Islanders returned the next night to burn down what was left.

The New York Times called the vigilantism “the most diabolical and savage procedure that has ever been perpetrated in any community professing to be governed by Christian influences.” Those arrested for leading the action were found not guilty in a trial. But authorities got the message: quarantine facilities were moved off-shore to a boat named after Florence Nightingale, then two islands off Staten Island, and finally, in 1920, to Ellis Island.

Stephenson argues that the well-prepared arsonists were led by men of property who wanted to “remove an obstacle to development and investment.” The xenophobia of the islanders was also a factor, echoing racist voices today who claim foreigners bring in crime and disease. For all their stated fear of disease, however, locals happily paraded through the smoking ruins and the displaced patients, seemingly unworried about infection. Stephenson writes: “The destruction of the Quarantine was less an irrational act of hysteria than a planned effort to allay community anxieties.[…] These actions suggest a crowd that was more intolerant and cruel than freedom-loving, and more vengeful than afraid.”

Ironically, the September 1st attack happened the same evening City Hall in Manhattan caught fire from the over-exuberant use of fireworks during the celebration of the transatlantic telegraph cable. The cable, the first step of a global communications network, presaged the coming globalism of peoples, cultures, and pathogens. That communication network also helped spread germ theory and the importance of vaccination.