What Happens to All That Used PPE?

Gloves, masks, and other personal protective equipment have kept us safe during the pandemic. Now they’re washing up on beaches around the world. 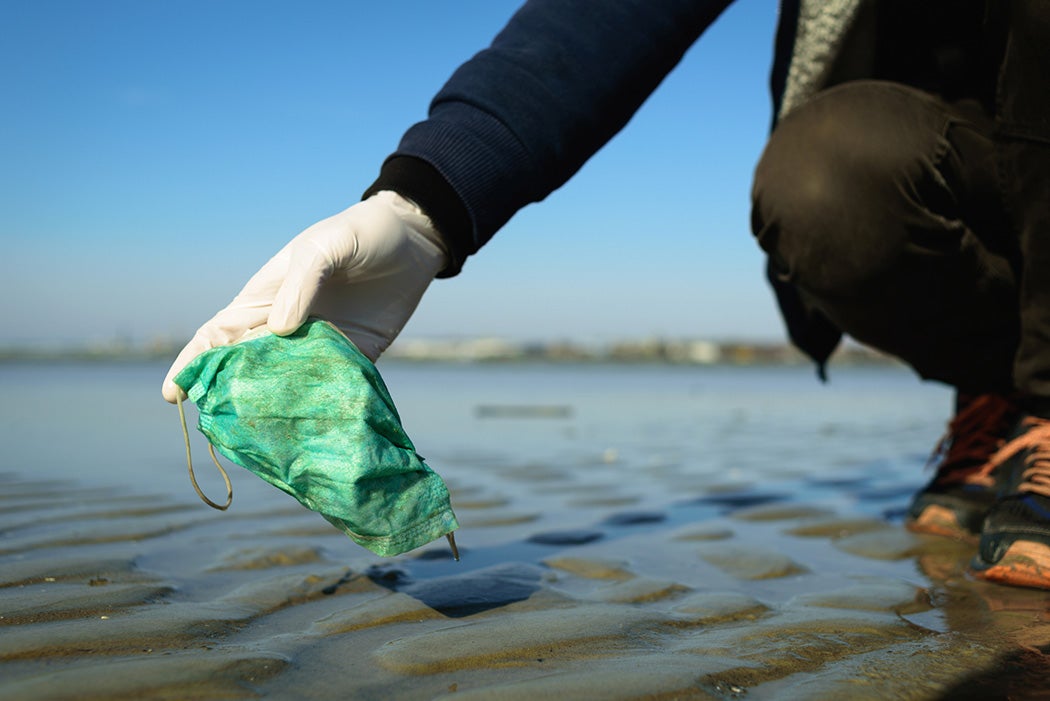 As states begin to reopen and people start to venture outdoors, they may notice new, previously unseen forms of trash—face masks and gloves. The world has been on lockdown for about three months, and masks and gloves are now littering the streets. Moreover, they are already starting to wash up on beaches around the world. Deutsche Welle, Germany’s broadcaster reported that conservation group OceansAsia found about 100 discarded masks on an uninhabited island a few nautical miles from Hong Kong. These items have never been spotted in that remote location before.

Gloves, masks, and other personal protective equipment (PPE) are key to keeping us safe, especially as we began to ease the lockdown rules. Yet, the environmental watchdogs worry that all that PPE will flow into the ocean. ” If they’re thrown on the streets, when it rains the gloves and masks will eventually end up in the sea,” biologist Anastasia Miliou at the Archipelagos Institute of Marine Conservation in Greece told Deutsche Welle.

To make things worse, the discarded PPE presents a particularly nasty problem for marine life—because of how it’s made, according to John Hocevar, oceans campaign director at Greenpeace. “Gloves, like plastic bags, can appear to be jellyfish or other types of foods for sea turtles, for example,” Hocevar told CNN. “The straps on masks can present entangling hazards.”

The environmentalists have reasons to worry. The world’s oceans are already drowning in plastic pollution. Every year, about 300 million tons of plastic is produced and 5 to 13 million tons of it washes into the ocean, according to the 2015 figures. The same paper lists that about 269,000 tons of the plastic floats in the ocean currents. As larger plastic debris breaks into smaller pieces, birds, turtles, and fish mistake it for food and gobble it up, which can perforate their stomachs, damage their intestines, or deprive them of nourishment, leading to starvation. Marine mammals and turtles commonly get caught into the discarded fishing gear and other items. And masks and gloves are choking hazards.

Humans live on land, but they suffer from marine pollution too. As one study notes, Homo sapiens has lived for half a century in a throwaway society, but no “away” exists. The trash we toss away comes back to us, and as the masks example above demonstrates, it only takes a few weeks. Plastic leaches into our drinking water, too—research found that we consume a spoonful of plastic a week. And the microscopic plastic bits dissolved in the ocean water, interfere with the healthy function of Prochlorococcus—the ocean’s invisible forests that produce ten percent of all oxygen we breathe.

Some organizations are finding ways to upcycle plastic ocean-bound waste into usable materials. Fashion company Rothy’s makes bags from the plastic bottles fished out of the sea. Professional Association of Diving Instructors (PADI) just partnered with Rash’R, a company that sells eco-friendly clothes to make masks from the plastic that once polluted the ocean.

That does divert a certain amount of plastic from the ocean currents. But while these masks aren’t single-use, they too may one day end up in the sea, if not recycled properly. Still, many masks and gloves will remain single-use. The aftermath of Hurricane Harvey prompted a discussion of how to recycle half a million flooded cars. The amount of single-use masks and gloves discarded during the coronavirus pandemic will likely make a research subject soon.

News Feature: Microplastics present pollution puzzle: Tiny particles of plastic are awash in the oceans—but how are they affecting marine life?
By: Alla Katsnelson
Proceedings of the National Academy of Sciences of the United States of America, Vol. 112, No. 18 (May 5, 2015), pp. 5547-5549
National Academy of Sciences
Marine Litter: Solutions for a Major Environmental Problem
By: A.T. Williams and Nelson Rangel-Buitrago
Journal of Coastal Research, Vol. 35, No. 3 (May 2019), pp. 648-663
Coastal Education & Research Foundation, Inc.