What About the Art in “Apesh*t”?

Beyoncé and Jay-Z’s new music video was filmed entirely at the Louvre museum. What messages hide in the histories of the featured artworks? 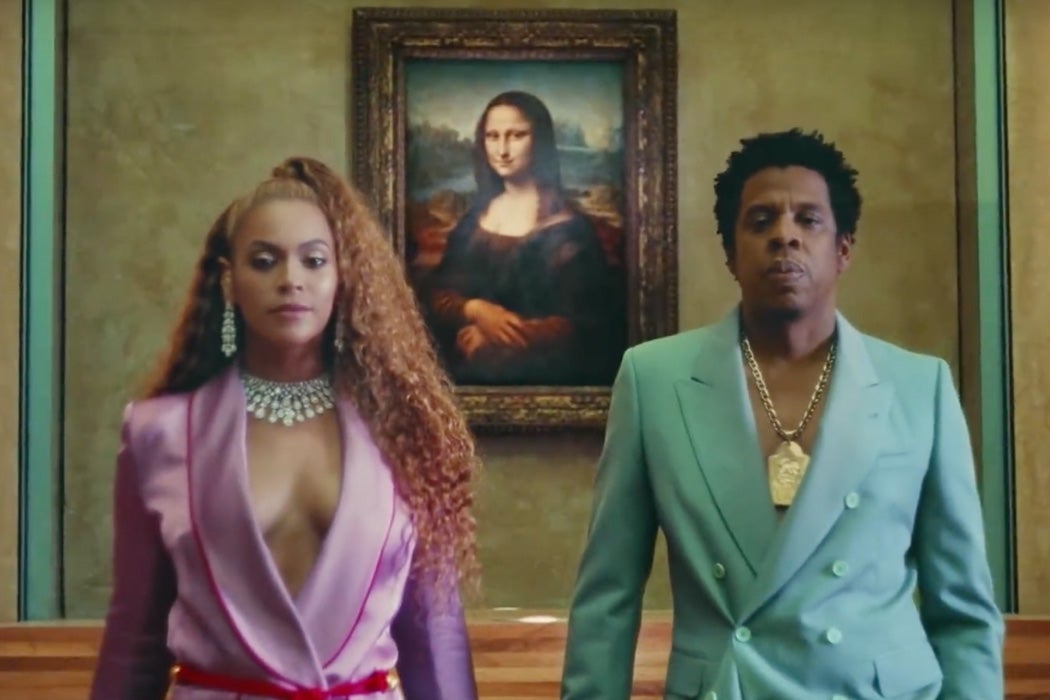 Over Father’s Day weekend, Beyoncé and Jay-Z released a music video for their new track “Apeshit” from their collaborative album Everything is Love. It includes five densely-packed minutes of art, fashion, and performance filmed on an epic scale at the Louvre.

It could be said that they are using their elite status and wealth to buy out the physical vestibule that holds the paragons of Western (and white) art. Over the course of the video, they re-populate this space with black and brown bodies. It could also be said that they are critiquing the museum as a colonial vault, highlighting the imperial roots of such museums as the Louvre. Much like the World’s Fairs, these exhibition spaces were founded upon Europe’s exploitation of colonies—asserting political dominance through a cultural looting and visual display of ownership. Some have noted that Beyoncé and Jay-Z are commenting on the history of visual oppression in Western art, art that has been made to affirm and assert whiteness as the norm while erasing black culture.

The art they chose to highlight has particular significance, as explored through some of the biggest artworks, which serve as characters in the Carters’ video.

In Winged Victory of Samothrace (190 B.C.E.), the now-iconic headless, armless female body is perched atop a low pedestal, as if about to take flight. At the heart of one of the most heated restitution debates between Greece and France, Winged Victory now serves as a symbolic stand-in for the ongoing debates about art repatriation. In “The Parthenon Marbles Custody Case,” scholar Shareen Blair Brysac discusses some of demands for restitution, while also introducing many curators’ hesitation against it: “The possibility of their return causes sleepless nights for curators the world over. If the marbles were returned to Greece, runs the argument, the halls of western museums would be virtually emptied of their treasure.” Recently, similar conversations about provenance were alluded to in Black Panther.

By including the Winged Victory of Samothrace, the Carters force us to wonder: Where does this art come from? How was it acquired? What violence led to the art’s ending up in a museum like the Louvre (or the Getty or the Met)? And how does that change the viewer’s experience of the art in this space? Beyoncé also physically inserts her body, and her dancers’ bodies, into this conversation. They stand in a layered line down the stairs from Winged Victory, offering the goddess herself a plethora of moving arms in place of her missing limbs—transforming a white, static space into one of diverse movement and agency.

In a recurring shot of Jay-Z, he stands before Théodore Géricault’s Raft of the Medusa, 1818-1819. The history of this work cannot be overlooked. Raft depicts the tragic loss of life after the ship capsized off the coast of Senegal in 1816. The Medusa was part of a fleet of ships trying to reclaim Senegal from Great Britain as a French colony. There were not enough lifeboats when the Medusa capsized, so the carpenter on board engineered a raft for 147 of the lowest-class soldiers and settlers. At first one of the lifeboats towed the raft, but eventually the now-infamous captain abandoned it in order to save the boat. Anthony Brandt writes that “[w]hat transpired on the raft is a horror story of mutiny, starvation, and despair.” Only fifteen people survived (five of whom died soon after), and these survivors told harrowing tales of death, cannibalism, and a fight for survival.

Géricault became obsessed. In his studio, he recreated a life-sized replica of the raft, based on a survivor’s drawing. He interviewed survivors, visited the morgue, drew from amputated body parts, and studied classical compositions of the body. His work was a visual recollection of the horrors that come from slavery, colonialism, corruption, and elitism: an early example of art for social justice. Brandt describes how the shipwreck impacted French culture and politics, while the painting “remains one of the great witnesses to human indifference to the suffering of others.”

As Jay-Z stands before this work, the underlying message of Géricault’s original painting is magnified, particularly as many of Jay-Z’s lines in “Apeshit” are also inherently political. (In one scene, he says “I said no to the Super Bowl/You need me, I don’t need you” while rows of young black men kneel in formation, a clear nod to Colin Kaepernick’s peaceful protest of kneeling during the national anthem.)

Neoclassical history painter Jacques-Louis David gets a lot of screen time as well, with paintings such as Oath of the Horatii (1784), Intervention of the Sabine Women (1799), and The Consecration of the Emperor Napoleon and the Coronation of Empress Joséphine (1805-7) serving as a backdrop throughout. In one of the most epic scenes of “Apeshit,” Beyoncé stands, flanked by four black women on both sides, all wearing nearly-transparent tops and leggings to match their skin tones in every shade of brown. (Beyoncé stands in the middle wearing a Burberry-esque plaid of pale yellow, picking up on the gold in the painting behind them.) They stand in front of David’s The Consecration of the Emperor Napoleon…, a monumental painting depicting Napoleon and Joséphine during their opulent coronation ceremony. They grab hands and begin dancing in front of the work, again inserting moving black bodies into a traditionally static white space. 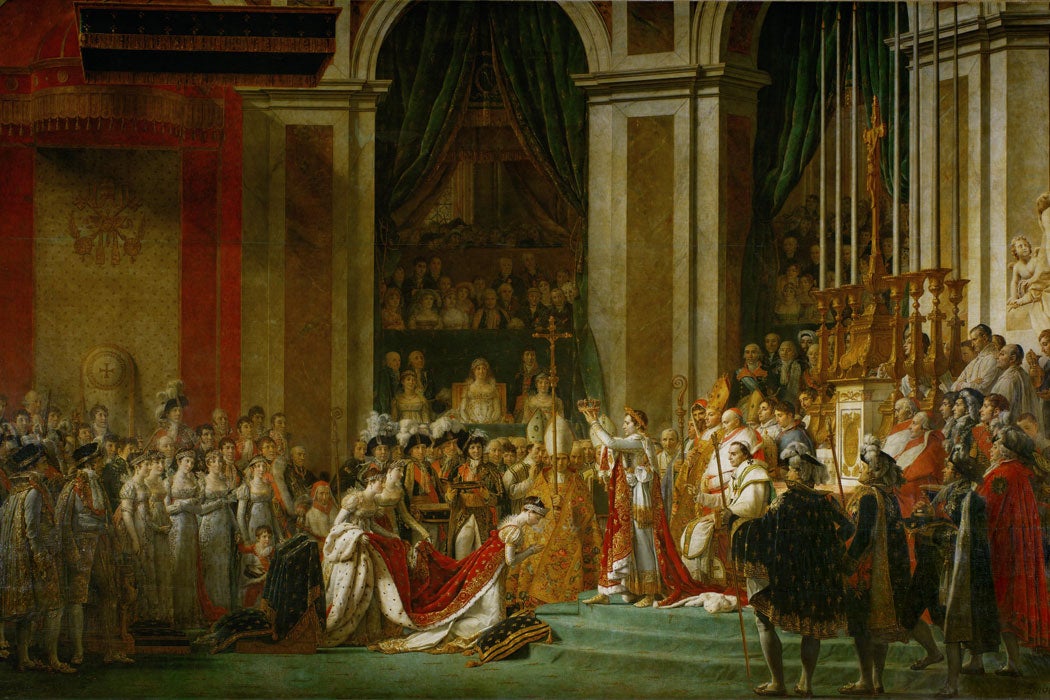 The Coronation of Napoleon by Jacques-Louis David 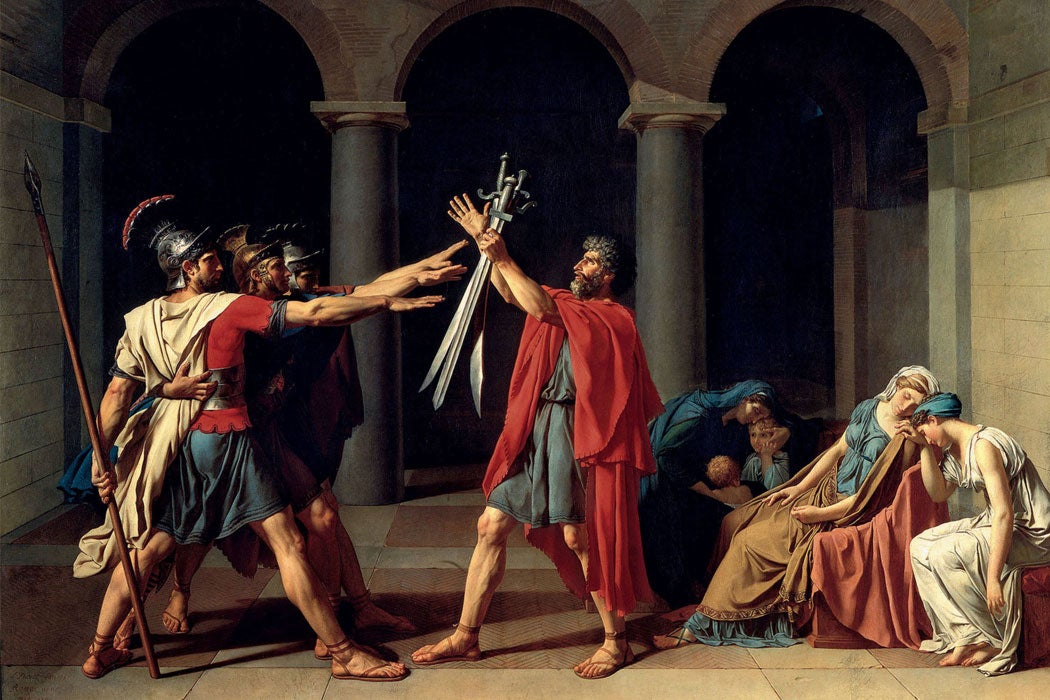 Oath of the Horatii by Jacques-Louis David 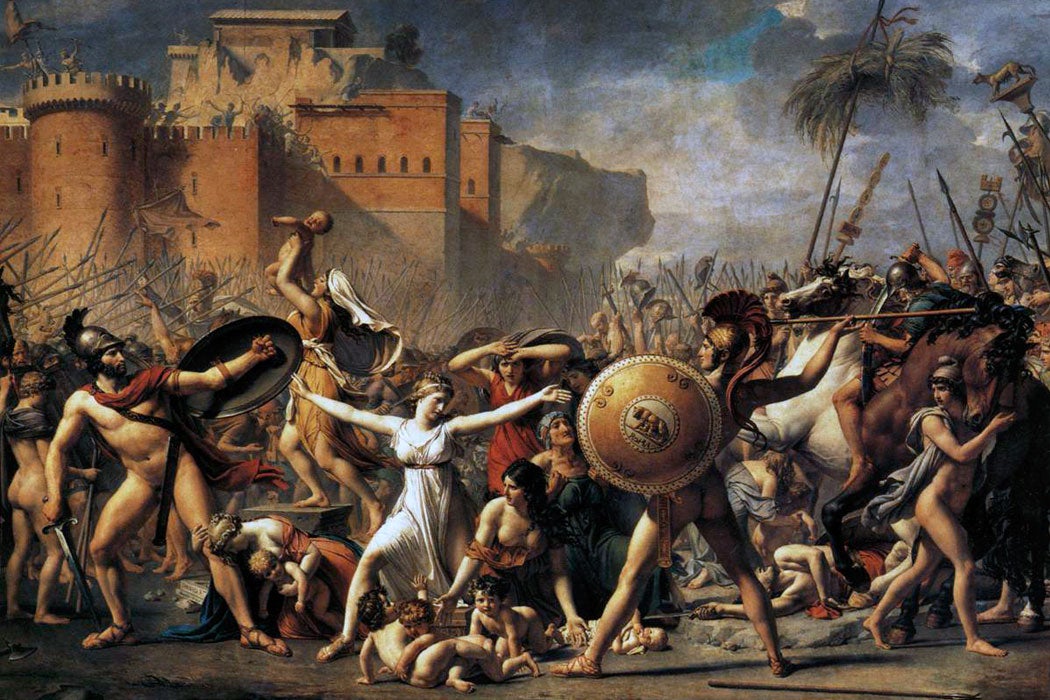 The Intervention of the Sabine Women by Jacques-Louis David

In the end of the video, Beyoncé and Jay-Z stand in front of Leonardo da Vinci’s Mona Lisa. This painting is largely regarded as one of the most recognizable masterpieces of Western art. Without even analyzing the portrait itself, what does it mean that the Carters stand in front of this work, without any constriction from crowds and cell phone-charged arms? It is nearly impossible to see the Mona Lisa in this way. But here, Beyoncé and Jay-Z have direct access to the work and the space.

Some could lampoon this as a flaunting of their elite status and wealth, but this also brings up issues of accessibility (and inaccessibility) in museums. As many art historians have posited, museums are institutionally white spaces in terms of the artists producing the work, the curators choosing the art, and the people allowed to move freely about the work without the scrutinizing surveillance of museum security.

In standing in front of the Mona Lisa without any restrictions, the Carters hold their own court—disrupting, appropriating, contesting, and ruminating on centuries of age-old practices upon which the museum was founded.

Owning Art after Napoléon: Destiny or Destination at the Birth of the Museum
By: Jonah Siegel
PMLA , Vol. 125, No. 1 (Jan., 2010), pp. 142-151
Modern Language Association
The Parthenon Marbles Custody Case: Did British restorers mutilate the famous sculptures?
By: Shareen Blair Brysac
Archaeology, Vol. 52, No. 3 (May / June 1999), pp. 74-77
Archaeological Institute of America
Review: Swept Away: When Géricault painted The Raft of the Medusa, he immersed himself in his subject's horrors Reviewed Work: THE WRECK OF THE MEDUSA by Jonathan Miles
By: Anthony Brandt
The American Scholar, Vol. 76, No. 4 (AUTUMN 2007), pp. 131-133
The Phi Beta Kappa Society