The horrific caning of Charles Sumner on the floor of the Senate in 1856 marked one of the most divisive moments in U.S. political history. 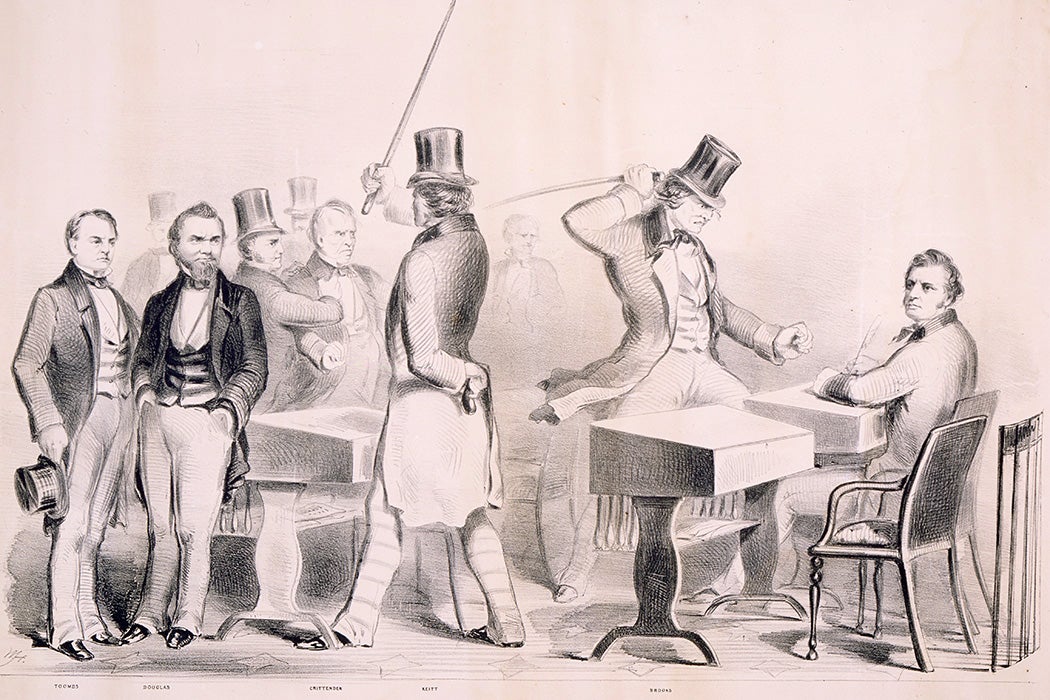 As we prepare for a new term of government in the wake of the recent insurrection at the U.S. Capitol, we might wonder just how contentious federal politics can get. But let’s not forget that time when South Carolina congressman Preston Smith Brooks assaulted Massachusetts senator Charles Sumner with a cane in the Senate chamber, beating him so badly that his skull was exposed and he lost consciousness, was covered in blood, and nearly died. As historian Manisha Sinha writes, this 1856 attack highlighted and magnified the divisions that would cause the country to come apart less than five years later.

When Sumner joined the Senate in 1851, Sinha writes, his anti-slavery beliefs quickly made him enemies. Opponents blocked him from committee appointments, denied him the floor, and heckled him when he spoke.

The attack on Sumner highlighted divisions in the nation when it came to ideas of masculinity.

Brooks’s attack came after Sumner gave his May 1856 speech “The Crime Against Kansas,” in which he condemned the actions of pro-slavery forces. Brooks claimed that he was provoked by Sumner’s insulting words about another senator, who was a distant relation of his. But, Sinha points out, under the prevailing southern code of honor, the appropriate response to a personal insult from a social equal would be a challenge to duel. Instead, Brooks resorted to a form of violence reserved for social inferiors—notably including the enslaved. Many southerners praised Brooks specifically for using a demeaning form of physical force. As a public letter to Brooks from five Charleston residents put it, “You have put the Senator from Massachusetts where he should be. You have applied a blow to his back… His submission to your blows has now qualified him for the closest companionship with a degraded class.”

Sinha writes that abolitionists drew the same comparison, to different ends. The New York Tribune asked if Congress was “a slave plantation where Northern members act under the lash, the bowie-knife, and the pistol.” Robert Morris, a Black Boston lawyer, wrote to Sumner that “no persons felt more keenly and sympathized with you more deeply and sincerely than your colored constituents in Boston.”

The attack on Sumner also highlighted divisions in the nation when it came to ideas of masculinity. Some in the South reviled Sumner’s “unmanly submission.” This was in line with pro-slavery rhetoric that tied abolitionism to feminism and accused white male abolitionists of effeminate “sickly sentimentality.” Northerners, on the other hand, were more likely to embrace a bourgeois idea of masculinity rooted in self-control and to view Brooks’s attack on an unarmed man as cowardly.

For many in the North, Sinha writes, the incident called to mind the question of whether slavery was compatible with a republican form of government. The New England Anti-Slavery Convention warned that slaveholders were trying to “crush out” freedom of speech on the floor of Congress, as they had done on their plantations.

As we think about division in our own time, it’s worth considering the historical context of political anger and division in the past.

The Caning of Charles Sumner: Slavery, Race, and Ideology in the Age of the Civil War
By: Manisha Sinha
Journal of the Early Republic, Vol. 23, No. 2 (Summer, 2003), pp. 233-262
University of Pennsylvania Press on behalf of the Society for Historians of the Early American Republic 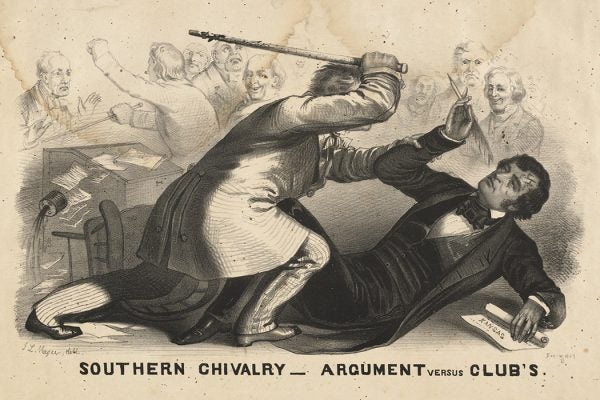