As a public figure, V.S. Naipaul is often outrageous, but his 30+ books speak eloquently in defense of civilization. 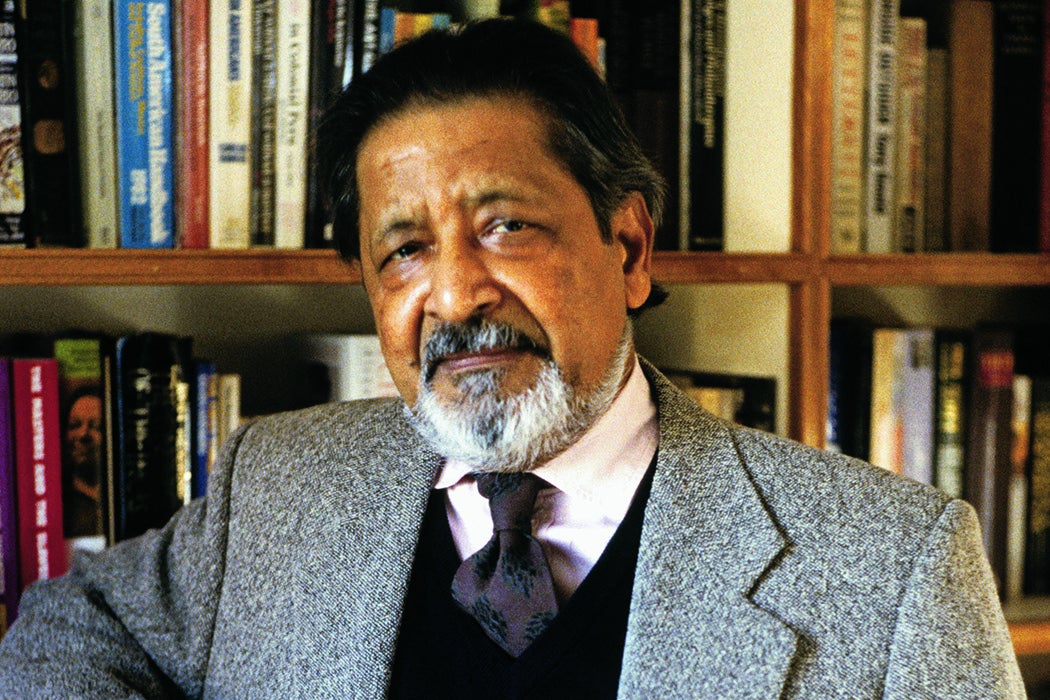 Today is the 84th birthday of V.S. Naipaul, the Trinidadian-born British writer of Indian descent, known as much for his larger-than-life ego, literary feuds, and tendency toward outrageous declarations as for his 30+ books. He has declared the novel dead, claimed no woman could ever write as well as he (especially that sentimental Jane Austen), and described post-colonial countries as “half-made societies.” And yet, he was awarded the Nobel Prize for literature in 2001, “for having united perceptive narrative and incorruptible scrutiny in works that compel us to see the presence of suppressed histories.”  How can such an irascible figure also be a uniter and booster of suppressed narratives?

Bruce Bawer took a look at Naipaul’s legacy for the Hudson Review back in 2001. Bawer opens with vivid reportage of a conversation between Naipaul, Gunter Grass, Nadine Gordimer, and Seamus Heaney held in Stockholm just after Naipaul had been presented the award and, significantly, a few months after 9/11. Each of the literary heavy-hitters had a theory about the cause of the terrorist attacks. “Naipaul responded with admirable temperateness. We are, he said softly, engaged in a struggle between freedom and tyranny.” Naipaul noted that one could not imagine the very conversation they were having taking place in extremist Islamic countries, and stressed how urgent it was for writers “to know the world more intimately” instead of employing “blanket characterizations.”

This statement informs Naipaul’s own literary trajectory, as over the decades he has made the pilgrimage from satirical picaresque to postcolonial bildungsroman before announcing the death of the novel and converting to nonfiction. Since then he has written about his world travels and the various cultures he has studied, notably critiquing Islamist extremism as early as 1981. Bauer notes that “Naipaul visits foreign places not because he wishes to condemn, but because he wishes to understand—to understand individual cultures, to understand homo sapiens generally, and, most intimately of all, to understand himself.” In their Stockholm conversation, Naipaul insisted that he was not a political writer, claiming to only write about people. Gordimer’s astonished reply: “Your very existence as a boy living under colonial rule in Trinidad was political!”

But Bawer is sympathetic to this irony at the core of Naipaul’s writing, noting “it was Western colonialism that provided him with his first experiences of indignity and exploitation,” and that despite this Naipaul recognizes it is in the West that “men and women are most likely to enjoy the greatest gift of all, the chance to really live.” Bawer defends Naipaul’s infamous “half-made societies” comment, calling it a refusal to condescend to Third World peoples; “He cares enough for them to admit that they deserve better—and what they deserve is Western civilization, which Naipaul, in a 1990 lecture, identified as ‘the universal civilization.'” Not how most of us would word it, but interesting in the face of growing extremism in developing countries, and the resistance of some in the so-called First World to choosing understanding over “blanket characterizations.”

For more of Naipaul’s views, writing advice, and ideas about civilization, read this 1971 interview originally published in Transition.

Lydia Pyne's new book out this week, and related content you won’t find anywhere else.