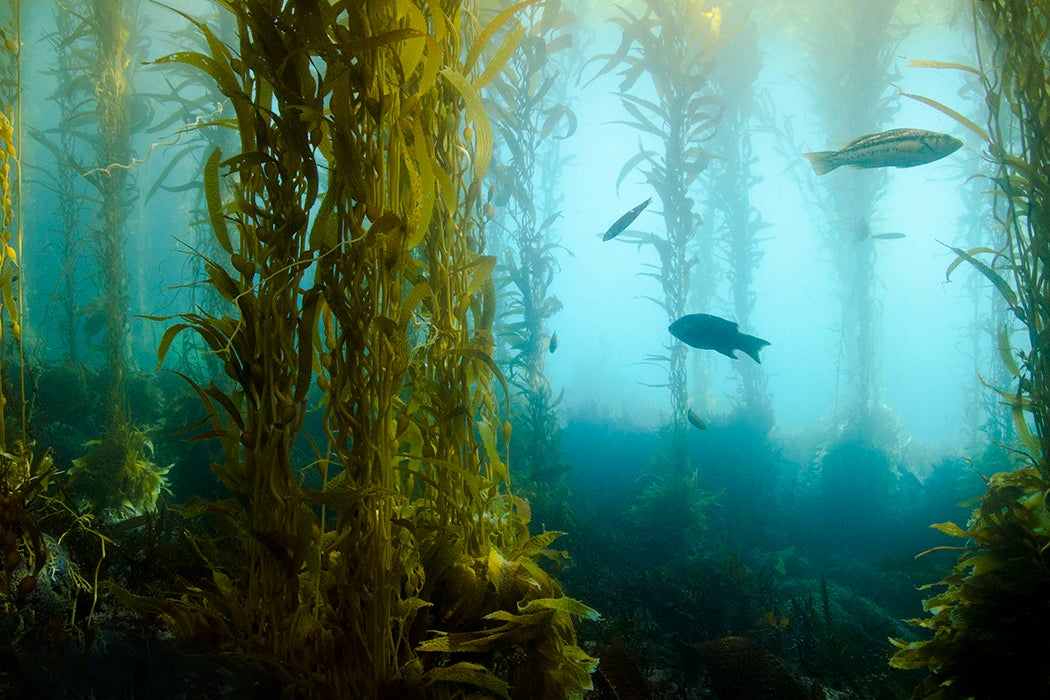 Kelp forests, found at temperate latitudes along approximately twenty-five percent of the world’s coasts, are pivotal to ocean health. But due to human-induced climate change and other environmental pressures, these swaying forests are disappearing rapidly in localized areas of South Australia, the Baltic Sea, and Atlantic Canada. In these regions, turf algae, a fast-growing opportunistic species that drastically changes the diversity and structure of an ecosystem, are quickly replacing the kelp forests.

Marine ecologist Karen Filbee-Dexter and and marine botanist Thomas Wernberg examine the collapse of kelp forests and their subsequent replacement by turf algae worldwide, outlining the scope of the problem and suggesting future steps to protect ocean health.

In ideal conditions, some kelp species can live up to 25 years.

Kelp forests, growing fully underwater, are made up of several species of seaweed that thrive in cold, nutrient-rich water. Despite being below the surface, these seaweed forests are highly productive, attaining “some of the highest rates of primary production of any natural ecosystem on Earth.” They’re also long-lived: in ideal conditions, some species can live up to 25 years.

According to Filbee-Dexter and Wernberg, these hidden forests are ecosystem engineers: their presence influences the structure and function of the very system that they inhabit. The kelp forest and its structure affect the pH of the water, light availability, and water flow, which in turn inform the ecosystem’s rate of primary production. The forest is both a habitat builder and a food source, providing direct support for fish, crustaceans, urchins, and snails. Kelp forests also produce tremendous amounts of drift material, providing habitat and nutrients for a secondary population beyond the forest “bounds.”

“These ocean forests are crucially important not only to marine plants and animals but also to humans,” point out Filbee-Dexter and Wernberg.

Humans benefit today from kelp harvesting, commercial and recreational fishing, and tourism, not to mention carbon sequestration and coastline protection. But our link with the kelp forest is even more ancient.

“Evidence suggests that early humans might have evolved along the rocky coasts of southern Africa as a consequence of a rich diet of marine organisms supported by highly productive kelp forests,” note the authors. And more recently, “early colonizers of the Americas followed the ‘kelp highway’ along the Pacific Rim, sustained by the bounty provided by kelp forests.”

But as multiple studies show, these diverse ecosystems are under threat. Climate change and human activity have led to the disappearance of more and more of them. “Over the last decade,” write the authors, “an emerging pattern has been that kelp forests increasingly are replaced by turfs, changing the reef seascape from a complex forest to a structurally simple mat of low-lying algae.”

Turf algae, though small, can catastrophically destroy kelp-based ecosystems. Turfs form thick, dense mats that change sunlight levels and nutrient availability, which can lead to the loss habitat, food, and productivity. And unlike kelp forests that collapse due to explosions of sea urchin populations (urchins will graze a forest to the point of destruction), “large-scale shifts from kelp forests to turfs have not shown recovery, but reefs have remained in a degraded turf state.”

Filbee-Dexter and Wernberg note that the cause of the seemingly irreversible transition from kelp forest to turf algae is unclear, but “human-driven environmental changes such as ocean warming or coastal eutrophication are favoring the growth and survival of turfs over kelps and decoupling the kelp loss and recovery processes from top-down control by urchins and/or their predators.”

This shift from kelp forests to turfs is happening across the globe, from the Baltic Sea to South Australia. Because kelp thrive in cool waters, ocean warming and the suite of problems associated with it—eutrophication, pollution, and invasive species—have led to massive declines in kelp forests worldwide.

“Climate change has set Earth on a trajectory in which increasingly novel environments and biological interactions have the potential to alter or decouple many of the natural ecosystem drivers and feedback mechanisms maintaining otherwise highly resilient kelp forests,” explain the authors. “These changes can drive lasting transitions to new ecosystem states, which provide substantially different ecological services.”

To better protect and ideally restore these ecosystems, more research examining the differences between kelp loss across environments from the Atlantic to the Pacific is needed. Equally crucial is the development of “a stronger causal and mechanistic understanding of what drives these shifts” from kelp forest to turf algae.

“We have a narrowing window of opportunity to identify the processes that impart resistance and stability in kelp forests or drive these shifts to turfs,” conclude the authors, “and this information is essential to solutions to restore, recover, or prevent further degradation.”

Rise of Turfs
By: Karen Filbee-Dexter and Thomas Wernberg
BioScience, Vol. 68, No. 2 (February 2018), pp. 64–76
Oxford University Press on behalf of the American Institute of Biological Sciences