The Reality Behind Kitchen Sink Realism

The gritty dramas of the 1950s and 1960s revealed the bitterness and disillusionment of Britain’s working class youth. 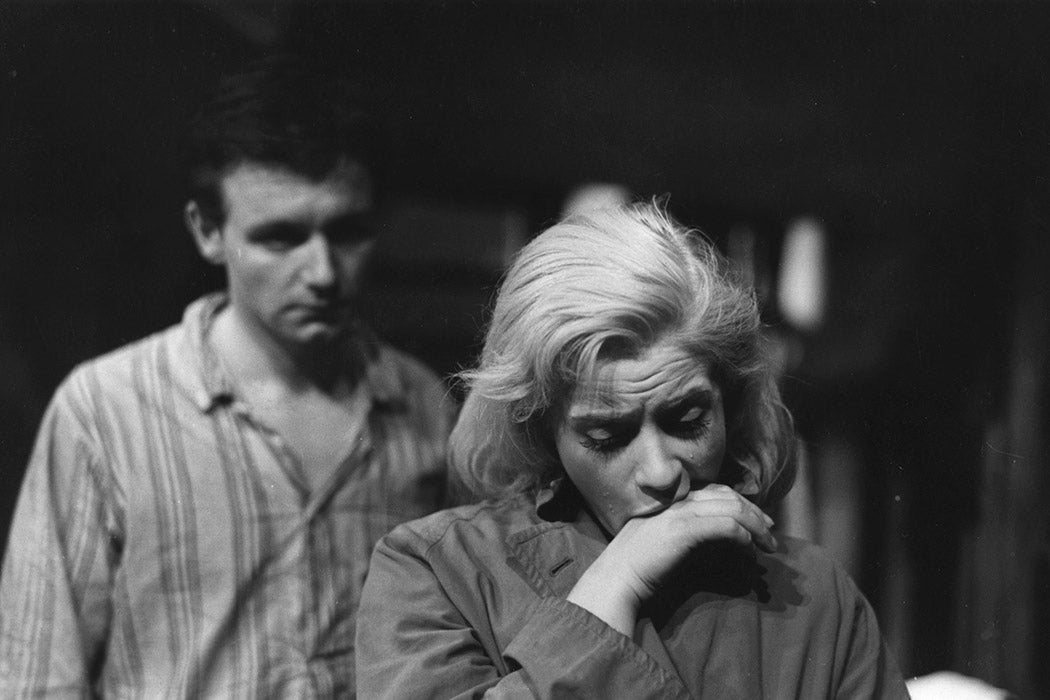 Kenneth Haigh and Mary Ure in the final scene of Look Back in Anger at the Royal Court Theatre, London, 1956
Getty
By: Emily Zarevich
3 minutes
Share Tweet Email Print

A naïve schoolgirl, impregnated and abandoned by a sailor, left alone to face the consequences of bringing a mixed-race child into the world. A cynical machinist in a bicycle factory, involved with two women, one of whom wants marriage and the other money for an abortion. A husband and wife living together in a tiny attic, unable to find harmony in their marriage, as their dissimilar backgrounds continue to cause strife between them. These are just some of the plots that make up what has come to be known as “kitchen sink realism,” a British cultural movement of the late 1950s and early 1960s that strived to present honest depictions of the complicated and mostly unglamorous lives of working-class casts of characters. In the decades following World War II, playwrights and filmmakers established a niche to represent the faction of the population that did not profit from the booming industries that were overtaking the British Empire at the time.

Summarized above are Shelagh Delaney’s 1958 play A Taste of Honey, the 1960/61 film Saturday Night and Sunday Morning, directed by Karl Reisz, and the 1956 play Look Back in Anger by John Osborne. What these works and all the others that can be classified as “kitchen sink” have in common is the prominent figure of “the angry young man.” This character archetype is not only angry but bitter and disillusioned with life, maintaining throughout the storyline that life dealt him—and at times, even her—a bad hand. Whether desperate for a raise at work or for respect from loved ones and peers, what the “angry young man” craves most of all is radical change.

A grimy kitchen sink on stage is the silent storyteller, a revealing indication of the characters’ impoverished circumstances.

This craving is often a reflection of the author’s own views of injustice. Cultural scholar Leslie Paul argues that both the authors and their self-insert characters’ infiltration of the entertainment scene in the 1950s was a socio-political campaign in itself. As Paul writes: “These private soldiers all carried field marshals’ batons in their knapsacks.”

A kitchen sink is not necessarily entwined into the plot of these works, but it’s an essential part of the settings. A grimy kitchen sink on stage is the silent storyteller, a revealing indication of the characters’ impoverished circumstances. When the characters in these works do leave their kitchens in their cramped flats, it’s to go to their detested workplaces, drink in a pub, or gossip and fight in the streets. That’s the extent of their world. But what the authors of the genre do make a point of conveying is that although their characters’ lives are confined—at times even claustrophobic in their unfortunate living conditions—their relationships and inner lives are rich and full of substance. They are worth exploring.

These plays, films, and novels can now be considered the immediate ancestors of popular British television series such as Coronation Street, Eastenders, and Derry Girls. Even the highly successful 2021 film Belfast, directed by Kenneth Branagh, contains elements of the genre’s social and political tensions between blue-collar characters. Through these new forms of media, kitchen sink realism lives on, long after the first round of stage-prop kitchen sinks have been packed up and put away.