Pocahontas, Matoaka, and Lady Rebecca Rolfe were all the same young woman, who died in 1617, a long way from home. 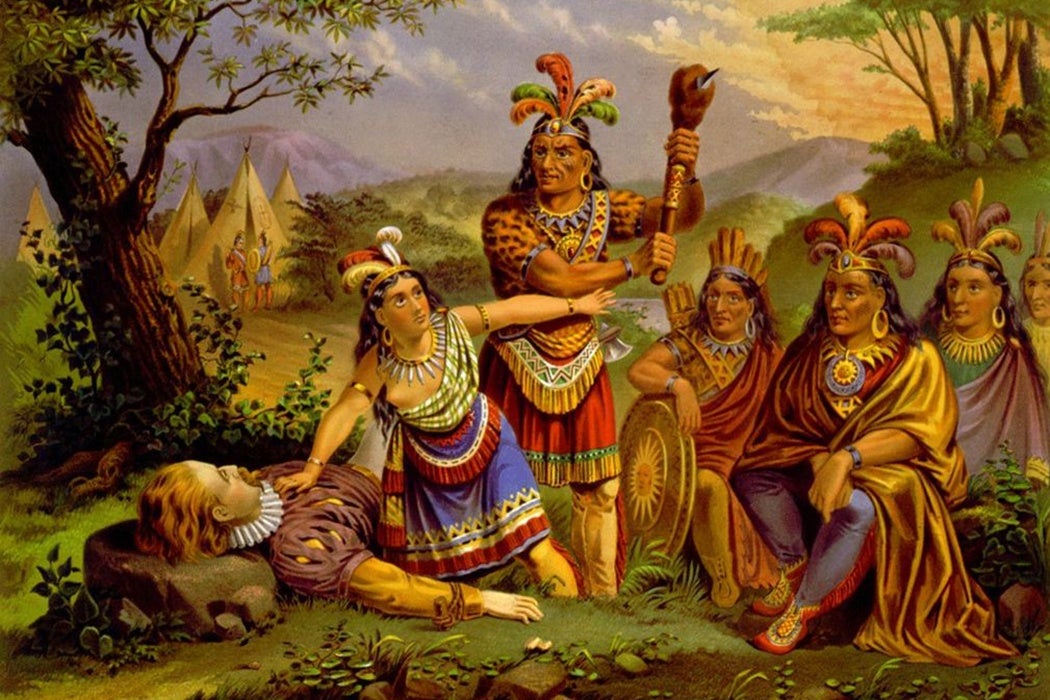 Four hundred years ago this month, Pocahontas attended a masque in London along with King James I and Queen Anne. Lady Rebecca Rolfe, as she was also known, would be dead two months later, of pneumonia, tuberculosis, or perhaps dysentery. She was around 21 or 22 years old.

Four years earlier, in 1613, she had been kidnapped and held hostage by British colonialists before she converted (or was converted) to Christianity and married (or was married to) John Rolfe. She was buried in Gravesend, down-river from London, for she had been in the process of returning to America. Her son, Thomas, eventually did return to America. And John Rolfe later used his late wife’s image to market his Virginia tobacco.

The most famous incident in the myth of Pocahontas—her rescue of the soldier-of-fortune John Smith from certain death—is questionable.

Ever since, Pocahontas has been romanticized and mythologized in more advertisements, as well as books, plays, poems, movies, cartoons, and dolls. Betty Louise Bell gives a synopsis of what little is known about Pocahontas, “her powerful father’s favored child, a tribal ambassador to the Jamestown settlement, the mediator between British colonists and indigenous peoples, the first Native woman to convert to Christianity, the third Virginian Native woman to marry a colonist, the mother of a new mixed blood race, and the first Native American to be honored by the Court of King James.” Pocahontas left no testimony of her own. “Pocahontas” was actually only her nickname; she was formally named Matoaka.

Bell points out how many of the accounts of Pocahontas reveal more about the authors than their subject. Pocahontas is a metaphor “for the author’s position on the colonial project.” Ten or eleven when she first met Europeans, Pocahontas is almost always presented as an adolescent in these encounters. She was called “Little Wanton” by Europeans shocked by her nakedness; Native children only wore clothes in winter. Bell writes that she entered “history as the sexual objectification of Native defeat and colonial conquest,” continuing, “the body of Pocahontas and the body of America are the same contested site in the colonial enterprise.”

Even, as Gail Tremblay notes, the most famous incident in the myth of Pocahontas—her rescue of the soldier-of-fortune John Smith from certain death—is questionable. Did it even happen? If it did, was Smith misinterpreting it? Smith, after all, didn’t tell this pivotal piece of the Pocahontas legend until 1624, years after Pocahontas was dead. He hadn’t mentioned the incident in an earlier account of his time among the Powhatan. And he evidently liked the idea of being rescued by “ladies of high rank” so much he claimed it happened to him on three different occasions.

Pocahontas the person has long since disappeared into what Bell calls the “colonized body, filled with other voices and purposes,” a screen for projecting fantasies of America’s founding by Europeans. The “Indian Princess” can’t speak for herself now, so we should be wary of what is said in her name. 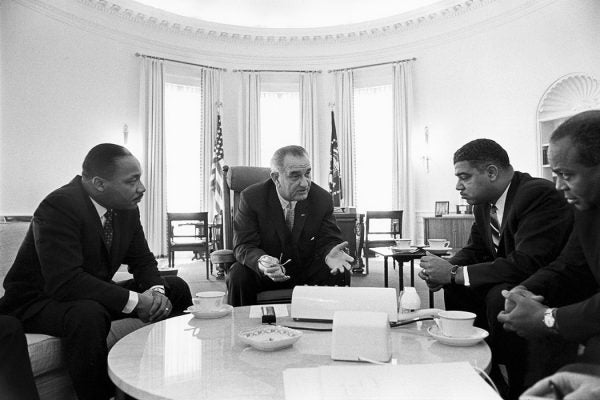 How Great Was the Great Society?

Lyndon B. Johnson called upon the wealthiest nation in the world to do something for those left behind.