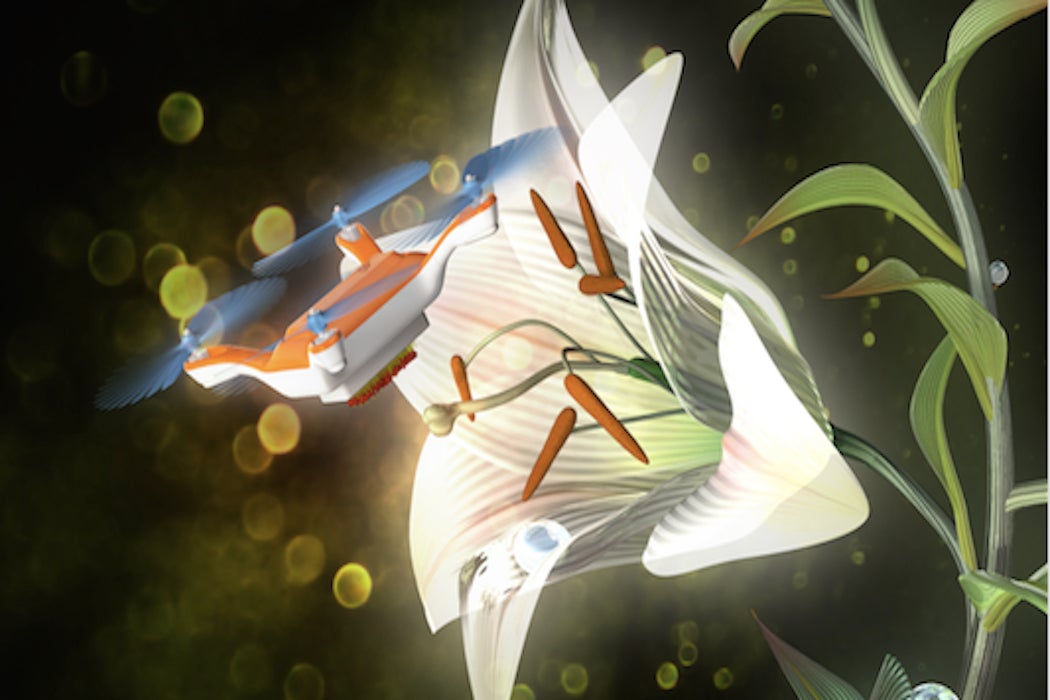 Plants that are not self-pollinated or wind-pollinated depend on bees (and other pollinators) to reproduce. Cross-pollination requires the transfer of pollen from the male plant part, the anther, to the female plant part, the stigma. Bees pick up pollen from flowers while foraging for nectar; the pollen sticks to their fuzzy bodies and falls onto the next flower bees visit, allowing foods ranging from apples, broccoli and vanilla to cacao, walnuts and coffee to set fruit. Over 30 percent of the foods we eat are pollinator-dependent.

News of widespread declines in bee populations, including the onset of Colony Collapse Disorder, the unexplained phenomenon of bees abandoning their hives, which was blamed for 60 percent of winter hive losses in 2008 and triggered predictions of an Apis-apocalypse, led scientists to test high-tech alternatives. Drones emerged as the top contender to replace—or supplement—bee pollinators.

In March, Walmart filed a patent for drone pollinators.

“There is a fair amount of evidence that, in certain areas, we don’t have enough bees to pollinate crops,” explains Shashi Shekhar, professor of computer science at the University of Minnesota. “If there are unanticipated surprises or other measures of [protecting bees] are not effective and we have real shortages of bees, we need a Plan B.”

Can we build a better bee?

The race is on to create pollinators as small and smart as honeybees.

Researchers at Harvard University developed a RoboBee that, despite weighing less one-tenth of a gram, is equipped with smart sensors that can interpret and respond to their environment, mimicking the function of the eyes and antennae of bees; The Charles Stark Draper Laboratory in Cambridge, MA, is working on DragonflEYE that could be used for guided pollination; and, in March, Walmart filed a patent for drone pollinators.

Though their designs are varied—some drone pollinators have gel-coated horsehair bristles to help collect pollen grains while others have flapping wings—all of the so-called “robo bees” were designed to achieve artificial pollination.

To develop the DelFly—a micro aerial vehicle with flapping wings that weighs as little as three grams—Guido de Croon, associate professor at Delft University of Technology in The Netherlands, studied flying insects like honeybees. In addition to giving his small drones flapping wings like bees, de Croon wanted to understand their behaviors, explaining, “We try to understand insect intelligence better because [bees are still much better performers] than our small drones…so how do they do all of these amazing things with so little brain power?”

In Japan, Eijiro Miyako, senior researcher at the National Institute of Advanced Industrial Science and Technology, retrofitted a $100 drone purchased on Amazon with horsehair bristles covered in a sticky gel and deployed it to collect and transfer pollen between plants. A study published in Chem found that the drone picked up 41 percent of the pollen on Lilium japonicum and managed to pollinate the flower on 37 percent its attempts. A separate study published in Agricultural Science and Technology tested drones for pollinating hybrid rice seeds on rice plantations in China and found that seed setting rates and yield were higher for UAV-assisted pollination than artificial pollination.

In part of the Sichuan Province of China, farmworkers hand-pollinate apple trees, using small brushes dipped in pots of pollen.

Despite the early successes, Miyako believes high-tech pollinators need more tweaking to be viable in the field.

“A lot of things have to be improved, especially for full automatic control,” he says. “I’m sure that cameras, GPS, and [artificial intelligence] would assist to realize our final goal for commercial development.”

The commercial deployment of drone pollinators is more urgent in certain parts of the world.

In part of the Sichuan Province of China, farmworkers hand-pollinate apple trees, using small brushes dipped in pots of pollen to dust flowers so the trees will set fruit. A combination of labor shortages and high costs of hand pollination have led to significant declines in the numbers of apple orchards in the region. Middle Eastern countries such as Saudi Arabia and the United Arab Emirates struggle to support pollinators in their desert climates and, as a result, these nations import $35 billion in food annually—a number that is expected to double in the next two decades. In these areas, Shekhar says, “it might be cheaper to have robot bees.”

In the U.S., there are still enough bees to pollinate major crops but pollinator populations are struggling: almost one in four native bee species are facing extinction and farmers in some areas must truck in millions of bees to perform the task. In California, for example, 1.7 million colonies are transported to almond orchards during February and March for peak pollination season.

Current robot bee prototypes are not advanced enough to deploy high-tech colonies for mass pollination. The models designed in The Netherlands, Japan, and at the Wyss Institute at Harvard are not sophisticated enough to navigate around each other (or pollinators in flight), too fragile to weather less-than-ideal climates, and current models have limited battery life. Some of the prototypes require drone operators to man the controls, making it impossible to scale the technology.

“If you have 50 drones in a greenhouse, you don’t want 50 human pilots,” de Croon says.

Shekhar believes the ideal robot bees will support intelligent infrastructure similar to the software used for air-traffic controls and UPS deliveries. Remote sensors, he explains, could be used to create maps of flowers that need to be pollinated and bees could be programmed to tackle the task within specific quadrants on the map; the software should also track their progress and help bees navigate unanticipated situations, including the presence of other pollinators. Right now, Shekhar says, robot bees have “limited computational resources.”

“At the single bee level, the prototypes have demonstrated that drone pollination works,” he adds. “Once you go from a single robot bee to dozens or thousands of them, we still have a lot of problems to solve.”

Scientists continue working on more advanced robo bees to solve some of these issues with the goal of having a product available to the market in the future. Miyako estimates commercial viability will take five years; de Croon thinks it’ll be at least a decade before drone pollinators hit the market. In the meantime, both agree that robot bees can be helpful—and even effective—should pollinator populations plummet and require supplementation, but hope that action will be taken to reverse the issues real bees are facing.

“This is still just the first step of robotic pollination; even thought it’s developed, it’s still at the primitive stage…but I’m sure the current state of technology is a milestone and possibly could be game changing for pollination,” Miyako says. “We must save the life of natural bees; that’s the first priority. But using both of natural and robotic bees can lead to effective pollination.”

Share Tweet Email Print
Have a correction or comment about this article?
Please contact us.
beesdronesrobotsMountain Research and DevelopmentProceedings of the American Philosophical SocietyProceedings of the National Academy of Sciences of the United States of America 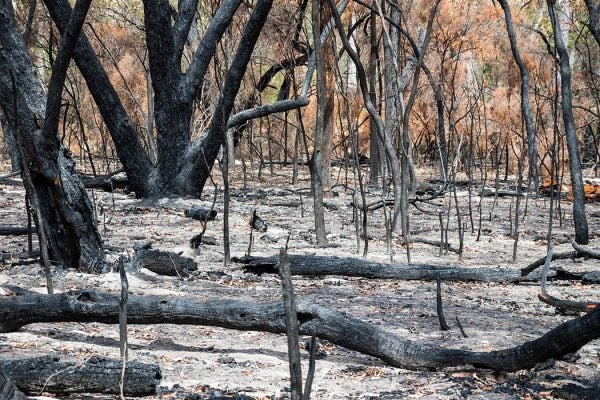 Eucalypts are now cosmopolitan, spread around the world through imperialism and globalization. Unfortunately, they're also highly flammable.