Seventy-four years ago today, lawmakers passed an amendment to the U.S. Flag Code. 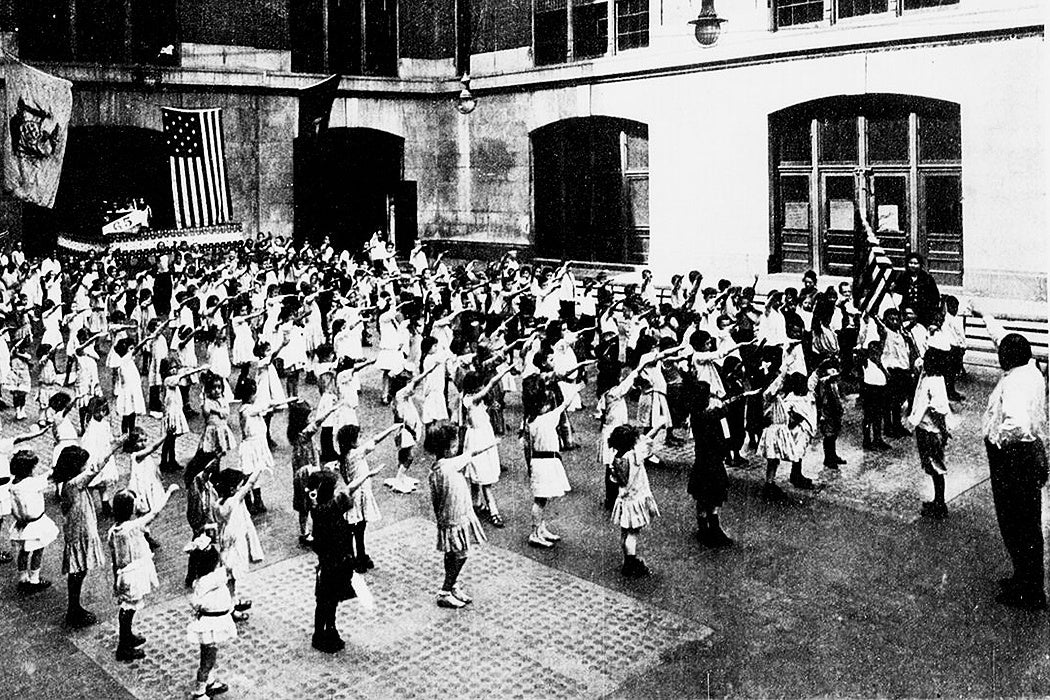 Seventy-four years ago today, lawmakers passed an amendment to the U.S. Flag Code, which President Franklin D. Roosevelt had approved just a few months earlier, instructing Americans reciting the Pledge of Allegiance to do so while “standing at attention facing the flag with the right hand over the heart.”

This may have been the earliest federal rule addressing what civilians should do to accompany the recitation of the Pledge, but it was by no means the first time someone had thought about it. That distinction goes to Francis Bellamy, a Christian socialist minister who, in 1892, was working at Youth’s Companion magazine. He came up with a physical component to the Pledge because, in fact, he was the guy who wrote it.

A few years earlier, another staffer at the magazine, James Upham, launched a campaign to encourage the display of American flags in classrooms. The goal was to promote “American patriotism” and, perhaps more importantly, to sell flags to schools through the magazine.

Ultimately, the magazine staff came up with a plan to make October 12, 1892, the 400th anniversary of Christopher Columbus’ arrival in the Americas, a national holiday in public schools—one whose celebration would, naturally, require a flag in every classroom. Bellamy was instrumental in getting Congress, and President Benjamin Harrison, behind the idea.

Bellamy was also in charge of creating an official “program of exercises” for the upcoming Columbus Day, which included “a lofty ode by Edna Dean Proctor, an original song by Hezekiah Butterworth, and a declamation on the ‘Meaning of the Four Centuries’ by Bellamy himself.” The highlight was to be a brand new pledge to the flag, which Bellamy was forced to invent after his colleagues refused to do it.

“I pledge allegiance to my Flag and to the Republic for which it stands: one Nation indivisible, Liberty and Justice for all,” read Bellamy’s Pledge of Allegiance, which was published in the September 8, 1892 issue of Youth’s Companion. On October 12 that year, according to The Journal of Education, “upwards of 13 million pupils” recited the Pledge.

Those who did so also performed what became known as the Bellamy Salute, which, according to the American Flag Association, called for students to keep their “right hand uplifted, palm downward, to a line with the forehead and close to it.”

Sound familiar? That’s because a few decades after the Bellamy Salute made its debut, fascists in Italy and Germany started doing one just like it, modeled after an ancient Roman salute, to show their political allegiance. This became a cause for concern for many Americans who noticed the disturbing similarity during World War II, Richard J. Ellis writes in his book, To the Flag: The Unlikely History of the Pledge of Allegiance. The Flag Code was amended, in response, to ensure that American schoolchildren would never again be confused for Hitler Youth.

Until this year, that is, when Nazi salutes once again seemed to be all the rage.