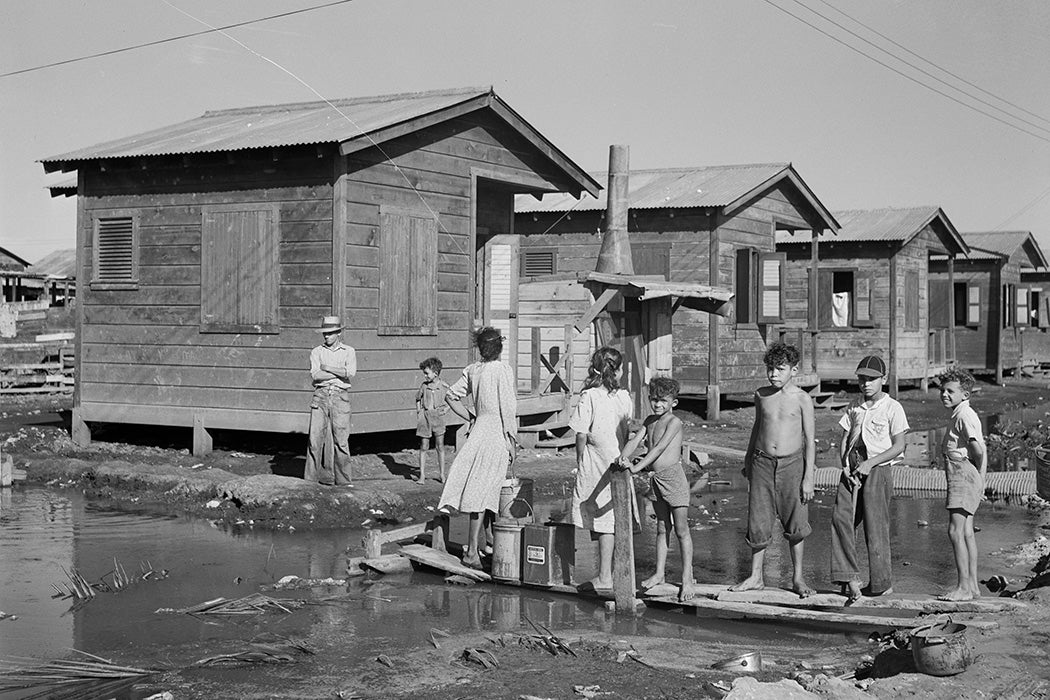 Fetching water from a spigot which services many people who live in the huge slum area known as "El Fanguito" in San Juan, Puerto Rico, 1942
via LOC
By: Matthew Wills
3 minutes
Share Tweet Email Print

The economic shock of the Great Depression hit Puerto Rico hard. The island was reeling from infrastructural, environmental, and socioeconomic crises from the hurricane of 1928. Another hurricane devastated the island in 1932. As a US territory, however, Puerto Rico could draw on something unavailable to other Caribbean islands: as a Commonwealth, it was eligible for the New Deal. Scholar Geoff Burrows argues the resulting relief and recovery programs, operated through the Puerto Rico Reconstruction Administration (PRRA), paradoxically “created space for increased local autonomy on the island by strengthening its colonial association with the U.S.”

As he notes, “The Puerto Rican New Deal was at times more democratic, more locally controlled, and relied more extensively on local staff than parallel New Deal programs” on the US mainland.

Rural electrification and clean water supplies, just like on the mainland, were key to the fight against poverty, malnutrition, and disease.

President Roosevelt created the PRRA with Executive Order 7057 in 1935. Before it shut down in 1955, the PRRA invested $1.36 billion on the island, half in payroll and half in public works. A big part of the public works programs was a “Little TVA” that saw the construction of seven hydroelectric dams in the Cordillera Central between 1935 and 1943. As with the much large Tennessee Valley Authority, the dams provided rural electrification, flood relief, year-round irrigation for the drier southern coast, and reserves of clean drinking water, all instrumental in improving desperate rural conditions.

As on the mainland itself, the island’s version of the New Deal was not without opponents. However, the New Deal was “immensely popular” with the majority of the public. Rural electrification and clean water supplies, just like on the mainland, were key to the fight against poverty, malnutrition, and disease. Other PRRA programs such as “soil conservation, agricultural rehabilitation, public housing, schools, hospitals, roads, sanitations systems, and the constructions of the islands first cement plant” were also welcomed.

“Puerto Rican experts […] were in fact instrumental in transforming the colonial system from one framed by a paradigm of relief to one of long-term socioeconomic reconstruction,” writes Burrows. “These changes were not imposed on Puerto Rico from above, but rather designed and developed on the island.”

Burrows notes that electricity, “one of the great symbols of modernity,” had been a major divide between urban and rural life on the island. The monopolies that controlled electricity on Puerto Rico saw no profit in spreading electrical grids into remote areas. The same held true on the mainland, where Appalachia, the deep South, and the West weren’t seen as viable markets. Decades after urban areas and large estates in Puerto Rico were electrified, the 70% of islanders who lived outside of urban areas still mostly lacked access to it. The hydro projects changed that.

Burrows shows that the pragmatic use of the New Deal by Puerto Rican “engineers, experts, and political figures” in their efforts to contest and negotiate US power had lasting impacts on the island. There was some truth in what Rex Tugwell, the last US-appointed governor of the island, said at the dedication of Dos Bocas hydro plant in September, 1941: “No man will profit from it; but all Puerto Ricans will share its services.”

Rural electrification and other infrastructural development clearly contributed to the island’s rapid postwar industrialization. It’s less clear, Burrows says, how exactly industrialization influenced postwar Puerto Rican migration, both internal (rural to urban) and outbound (to the mainland US). The island’s move from an agricultural to an industrial economy in the 1940s and 1950s radically changed the island’s social, political, and economic life.

Burrows notes that knowledge of the New Deal is widespread on Puerto Rico, but awareness that the New Deal even existed on the island is only “faint” on the mainland. After Hurricane Maria in 2017, more than half of the mainland respondents to a poll didn’t know Puerto Ricans are fellow US citizens—a percentage that increased in later polls due to coverage of the effects of the natural disaster. 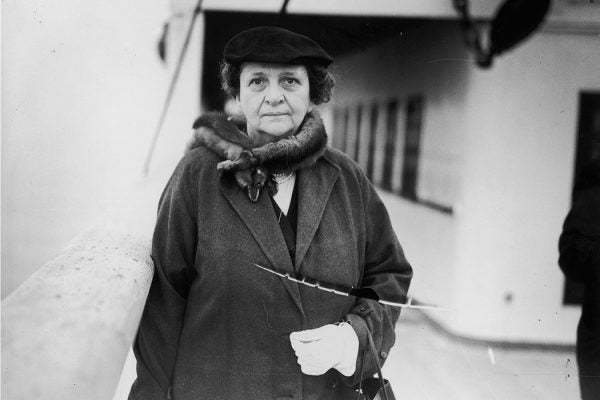 She designed Social Security and public works programs that helped bring millions out of poverty. Her work has been largely forgotten.