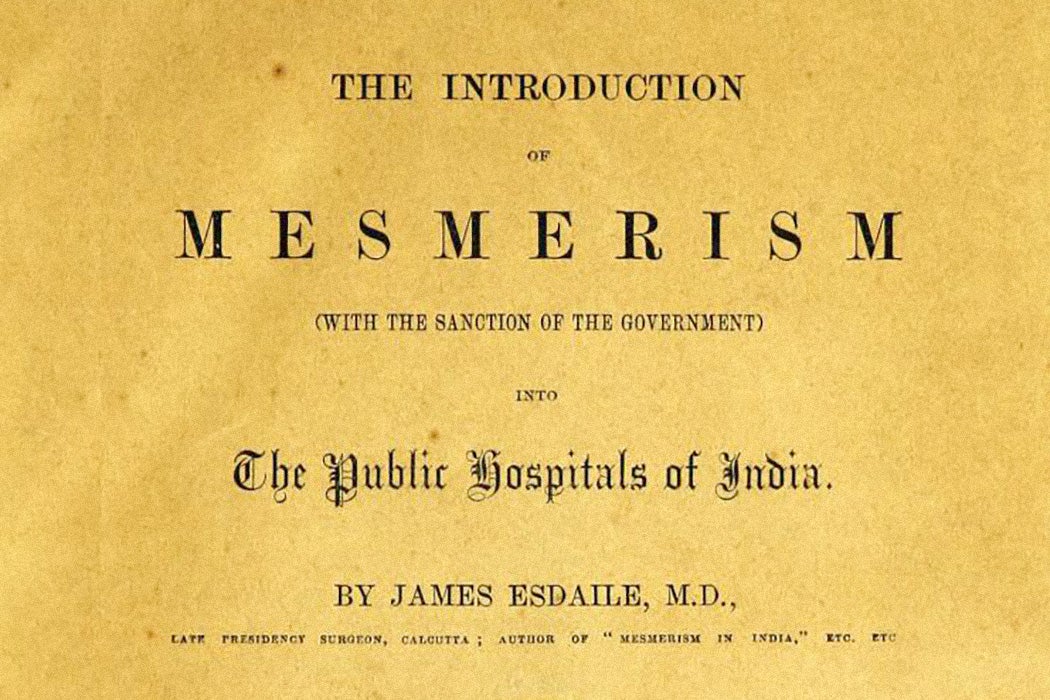 The cover page of The Introduction of Mesmerism into the Public Hospitals of India
via archive.org
By: Salama Udaipurwala
5 minutes
Share Tweet Email Print

Many historians agree that “colonization and the civilizing mission” rested on Western science’s supremacy over superstition, legitimizing the colonial project with the suppression or eradication of local belief systems. James Esdaile and his experimental mesmeric hospital highlight the contradictions of colonial rule in India.

In 1839, Assistant Surgeon Dr. James Esdaile, in the East India Company’s service, arrived in Hooghly, a town 38 km upriver of Kolkata (Calcutta), to work at Hooghly Hospital. Originally from Scotland—and with a degree in medicine from Edinburgh—Esdaile was advised that a warmer climate would better suit his delicate lungs.

In Bengal, Esdaile read about mesmerism, or animal magnetism. The practice, first popularized by Franz Mesmer in the late eighteenth century and only becoming popular in Britain in the nineteenth century, was said to have anesthetic properties and could treat psychoses (“nervous” patients).

As Esdaile described in his book, Mesmerism in India, and Its Practical Application in Surgery and Medicine, in April 1845 a local (Hindoo) man, Madhab Kaura, was sent to him from the Hooghly jail for scrotal surgery. Seeing the patient’s suffering during the procedure, Esdaile allegedly “turned to the native sub-assistant surgeon, an élève of the medical college, and asked him if he had ever seen Mesmerism? He said, that he had seen it tried at the medical college, but without effect.”

Esdaile admitted that he only knew about the practice through reading, but he felt there was nothing to be lost in trying it.

Though the dulling of pain and loss of senses took longer than he’d hoped it would, it reportedly worked.

“I placed [the patient’s] knees between mine,” he reported, “and began to pass my hands slowly over his face, at the distance of one inch, and carried them down to the pit of his stomach. This was continued for half an hour…”

Though the dulling of pain and loss of senses took longer than he’d hoped it would, it reportedly worked. Esdaile went so far as to “apply” fire to the patient’s knee to test the strength of the trance-like state. The patient remained free of pain.

Esdaile performed seventy-two more operations that year, using mesmerism as an analgesia. A government-appointed committee—composed of colonial Bengal’s most distinguished people, including magistrates and the Inspector General of Hospitals—then allowed him to run an experimental mesmeric hospital, subject to scrutiny from medical officers.

Esdaile’s practice was widely popular with “the natives,” as he termed them, and caused much fanfare. As historian of psychiatry Waltraud Ernst reports, he performed fantastical feats such as excising a tumor “7 feet in circumference and 2 feet at the neck,” seemingly without the patient feeling pain. Historian Alan Gauld writes that Esdaile conducted hundreds of surgeries and reported a 5 percent mortality rate (other techniques had a 50 percent or higher mortality rate).

Hooghly Hospital came to be called jadoo hospital (the word for “magic” in many Indian languages), less because they believed Esdaile was casting spells and more because of his own use of the phrase belatee munter, “the European Charm,” when explaining mesmerism to Indian assistants.

Despite the initial approval for Esdaile’s experiments by the review committee, mesmerism was widely viewed as a pseudoscience that was nothing but a spectacle for the elite of Europe. At his experimental hospital, Esdaile hired native assistants to perform the mesmerism in his stead (he said the practice tired him excessively). The mesmerizer would take the patients to a dark room and blow over their bodies until they achieved a sleep-like state. Esdaile would come and confirm if the mesmerism was complete. Mesmerism could take days, if not weeks. Once achieved, Esdaile would perform the surgery. The doctors inspecting Esdaile’s work noted that each mesmerizer had their own way of performing the entrancement. It was impossible to standardize (and something Esdaile seemed to have resisted on the grounds that it would disturb the mesmerizing process, notes Ernst).

But this wasn’t the only problem. The association of mesmerism with magic was too close. And Esdaile wanted to distance himself from faith healing and present mesmerism as a science.

He did this in part by treating “non-natives,” i.e., Europeans, to legitimize his practice as science. But he also made his practice open to public opinion and reported the results of his experiments in the local newspapers, all to ensure that his work was seen as a science. As historian Gyan Prakash notes, “Indeed it was in the public display of its magical effect that mesmerism emerged as a science, perched precariously in between cold scientific scrutiny and superstition in its ‘widest’ and ‘most absurd forms.’”

Most of Esdaile’s patients were Indians, drawn from the general or convict populations. In Mesmerism in India, he described those he treated as coming from a “feeble-minded, ill-nourished race, remarkably deficient in nervous energy.” But as Prakash writes, the wondrous treatment of the “native” was a necessary part of the colonial project, transforming “the superstitious eye…into one that, with repeated confrontation with scientific knowledge…was capable of understanding.”

Whatever its efficacy, mesmerism was a costly practice. Ernst writes that Assistant Surgeon Dr. Frederic J. Mouat, already a critic of Esdaile, calculated the hospital would incur a significant additional expense of 750 rupees per month with its use, as one mesmerizer was needed for every four patients.

In addition, ether and chloroform were in use by the late 1840s, and they were cheaper, more efficient, and aligned with orthodox Western medical practices. Even Esdaile had to concede, albeit reluctantly, that they were better.

Esdaile was made Presidency Surgeon in 1848, but his mesmeric hospital lost favor. He returned to Scotland in 1851. Though it’s not certain that subtropical Bengal had helped his lungs, Gauld suggests that Esdaile moved once more, south to Sydenham (London), as the Scottish climate “proved too bracing for the weak lungs which had sent him to India in the first place.” He died there in 1859 at the age of fifty-one.