The Man Who Pulled the First Houdini

Harry Houdini wasn’t always famous for his daring escapes. A look at how the humble Hungarian immigrant became the world’s most famous magician. 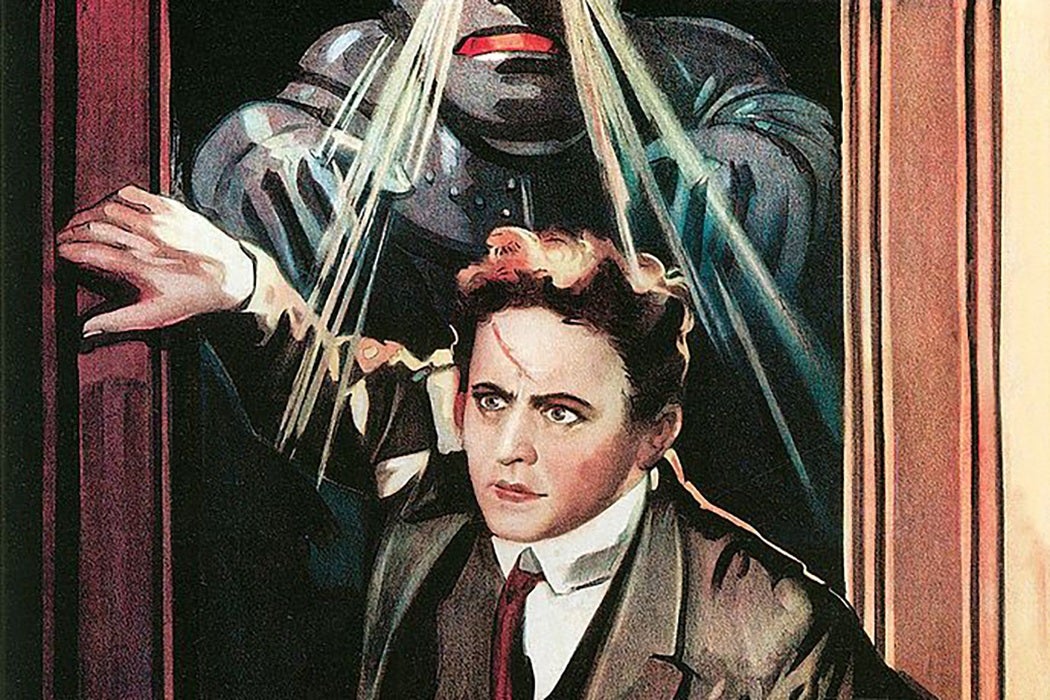 Houdini pursued by a robot in a 1919 movie poster
via Wikimedia Commons
By: Peter Feuerherd
3 minutes
Share Tweet Email Print

What does it mean to be a magician? It’s a question that illusionists of all stripes have played with for decades. As the New York Times recently reported, one of the hottest new magicians around works to dismantle illusions, trying to “break magic.” But Derek DelGaudio isn’t the first performer to try to upend the audience’s expectations. That’s been part of the profession since the days of the infamous Harry Houdini.

Houdini, born March 24, 1874, came to the U.S. from Hungary at four years old. He was born Erik Weisz, with his family’s name being changed in American entry forms to Weiss. His father was an itinerant rabbi who settled in Appleton, Wisconsin, to minister to a small European Jewish community. The family then moved to Milwaukee, only to eventually land in New York in the rabbi’s search for work as a non-English speaking cleric.

Weiss’s Wisconsin roots played a role in his later life. The state was then a center for various circuses, and Houdini later said he was mesmerized by the atmosphere. He was introduced to escape techniques when asked as a young boy to assist a local police officer unshackle a prisoner. And indeed, escapes would become his calling card: To “pull a Houdini,” or to miraculously escape an uncomfortable or dangerous situation, is still part of the American lexicon, even 90 years after his death.

Houdini saw himself as a kind of public intellectual.

At the age of 12, he ran away to the circus…only to return to his family in New York. He worked as a contortionist and then hooked up with a friend to form the “Brothers Houdini,” named for the famous French magician Jean Eugene Robert-Houdin. Weiss then met another Coney Island performer, Wilhelmina Beatrice Rahner, or Bess for short, and they married when he was 20 and she was 18. They remained partners in romance and in the entertainment business for Houdini’s entire life.

Returning to Wisconsin in 1897, Houdini challenged local law enforcement officers to lock him up, and the act became a hit. He later toured Europe, performing his daring escapes. In 1924 he was able to attract a crowd of 15,000 in Milwaukee, then about half the city’s population. His most infamous act was escaping from a milk can filled with water. Houdini’s tricks were so sophisticated that some believed he was able to transcend the material world. Houdini, on the other hand, saw himself as more than an entertainer, fashioning himself as a kind of public intellectual—although he had had little formal education. Houdini became a wealthy man and he spent much of his money sponsoring magicians’ groups in the U.S. and Britain.

Houdini crusaded against spiritualism, the belief that the living can communicate with the dead. At the time spiritualism was at its height, engendering the support of many prominent people, including Sir Arthur Conan Doyle, who Houdini considered a friend.

World War I and the subsequent Spanish influenza epidemic contributed to a collective grief that made spiritualism appealing. But Houdini, coping with the death of his beloved mother, was turned off by spiritualism charlatans. Some criticized Houdini for attacking spiritualism, as he and his wife had engaged in charlatan shows, selling tickets to communicate with the dead. But to Houdini, that past experience only cemented his own credibility. He would write frequently on the topic, even hiring spies to unmask spiritualists. One woman he hired was provided messages by a crooked spiritualist from her dead husband and children. But she had never been married and was childless.Spiritualists and their supporters were bitterly opposed to Houdini’s campaign. Some said he would die young and tragically for his attacks on their trade.

On October 31, 1926, after suffering a blow to the midsection administered by a Canadian taking him up on his claim that he could withstand any body blow, Houdini died of peritonitis, with the cause attributed to a ruptured appendix brought on by the punch he suffered. Houdini was 52.

The Bonds He Did Not Break: Harry Houdini and Wisconsin
By: Kimberly Louagie
Wisconsin Magazine of History, Vol. 85, No. 3 (Spring, 2002), pp. 2-17
Wisconsin Historical Society

Move over flâneur, here comes the flâneuse, the female version of the famous French walkers.