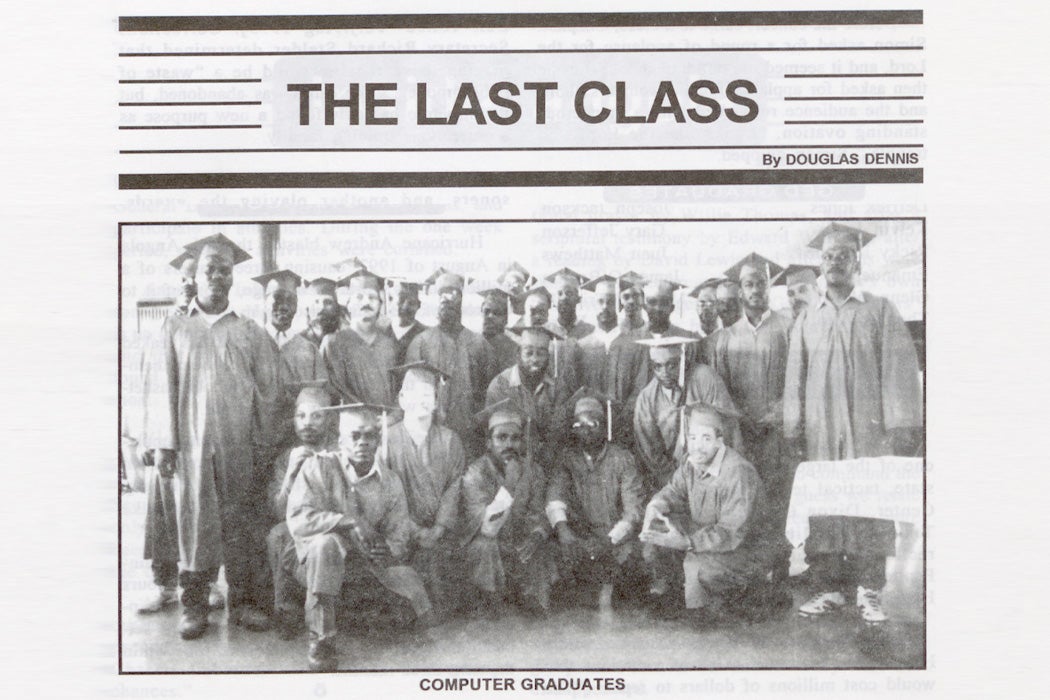 Politicians don’t know what to do about crime. But they’re going to do something. Even if it’s wrong.

That was a provocative commencement speaker’s message more than 28 years ago.

“The country is ready to spend billions of dollars on what politicians say are solutions to crime: more prisons, longer sentences, more death penalties, and the famous ‘three strikes and you’re out.’”

Just as unusual, perhaps, was the speaker. John P. Whitley, the warden of the Louisiana State Penitentiary, presided over the commencement for the Northwest Missouri Community College class of 1994.

If these policies were effective, Louisiana would be the safest state in the union. Only a few months ago Louisiana was declared the most dangerous place to live. 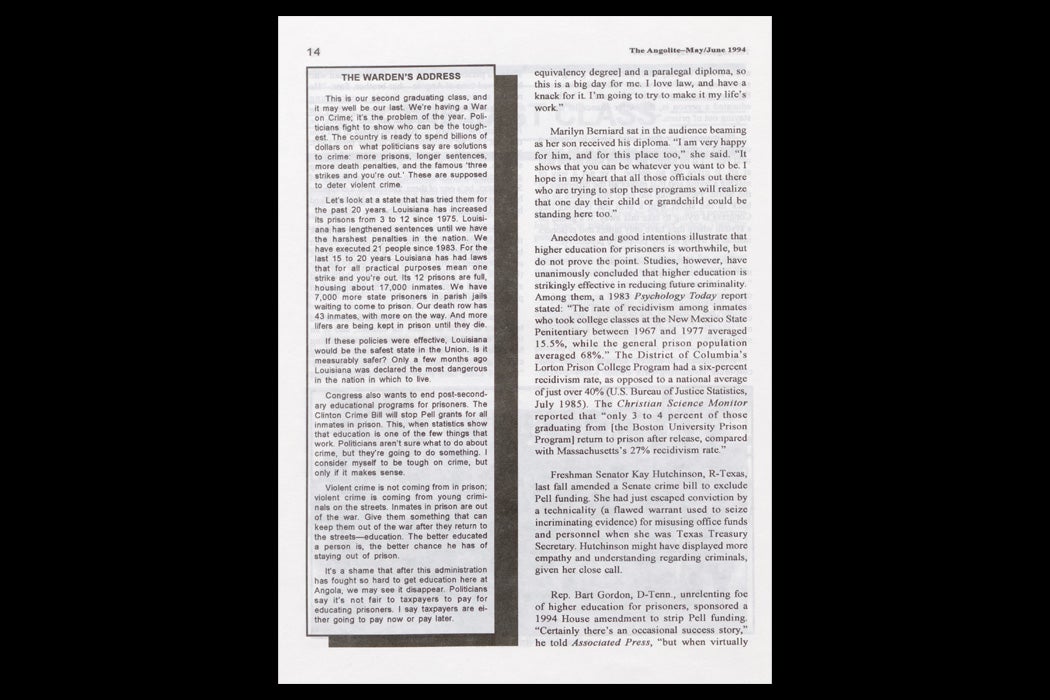 Whitley was hired as warden in 1990 to fix things after a federal judge declared a state of emergency at the prison, also known as Angola. As part of his reform efforts, he brought in the community college to offer computer and paralegal programs.

Whitley’s scathing graduation speech, published in the prison news magazine The Angolite, stood in sharp contrast to the tough-on-crime rhetoric of the 1990s.

In his address, Whitley mourned the possible loss of the programs he brought to Angola. “It’s a shame that after this administration has fought so hard to get education here at Angola, we may see it disappear,” he said. “Politicians say it’s not fair to taxpayers to be educating prisoners. I say taxpayers are either going to pay now or pay later.” Sixty-two graduates received certificates in paralegal studies and computer technology on that day in May 1994, The Angolite reported.

“I never graduated from anything except grammar school and junior high,” paralegal graduate Lionel Berniard told the magazine on graduation day. “Since I came here I got my GED and a paralegal diploma, so this is a big day for me. I love law, and have a knack for it. I’m going to try to make it my life’s work.”

Berniard and his peers were members of “the last class,” the final group of incarcerated students who were able to receive financial aid for college programs before Congress eliminated Pell Grants in 1994. It won’t be until 2023 when wide-scale access to Pell Grants will once again be available inside state and federal prisons. 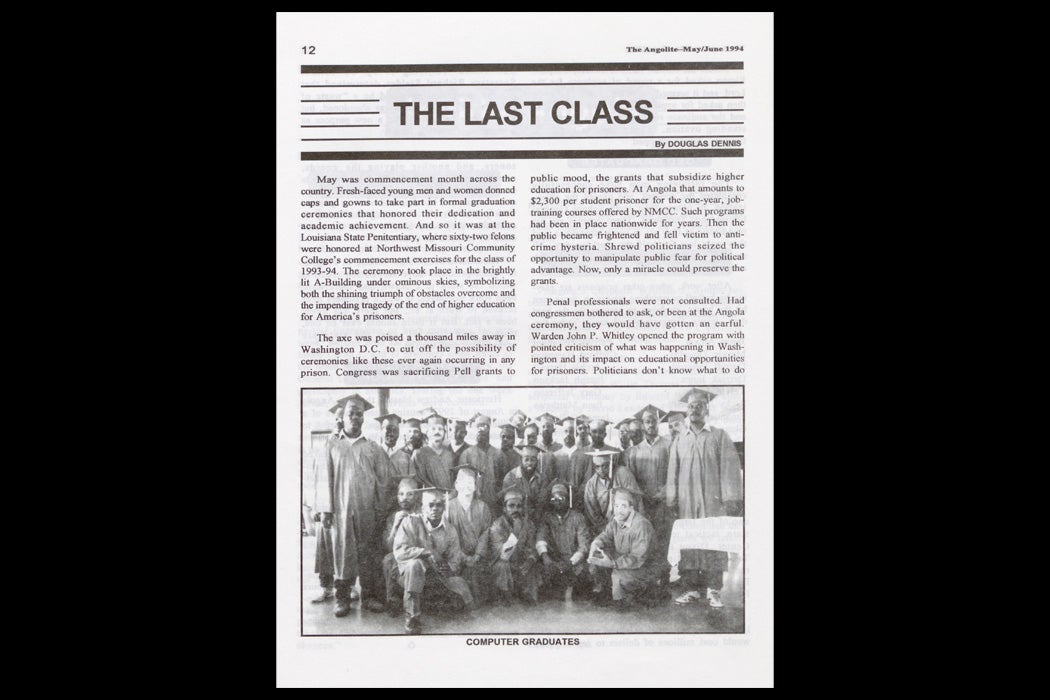 “The axe was poised a thousand miles away in Washington D.C. to cut off the possibility of ceremonies like these ever again occurring in any prison,” wrote prison journalist Douglas Dennis of the commencement. “Congress was sacrificing Pell Grant to public mood.”

Some of the graduates are still using the paralegal education that was financed with a $2,400 Pell Grant. Darren Hooks, now 62, is still at Angola working as an “inmate counsel substitute”—a type of jailhouse lawyer appointed by the prison. Others in the class have gone on to use their paralegal course as the foundation for successful careers on the outside. Their stories chronicle the ups and downs of prison education at a time when a warden who believed in education was swimming upstream against a tidal wave of tough-on-crime policies.

An incentive for education

When Hooks arrived at Angola in September 1981, the foremost thing on his mind was survival. He was 22, fresh from service in the U.S. Army Reserves, with a life sentence for murder. Under relentless media scrutiny, Angola’s reputation as the bloodiest prison in America was cemented in the public consciousness. Despite his military training, Hooks was uneasy.

Like every other healthy man incarcerated at Angola, he was expected to work. Like every other new arrival, he was assigned to a farm line. These lines could consist of a hundred men marching in the early morning two-by-two, from the main prison or an outcamp compound, to work sites within vast agricultural plots.

There, the prisoners pulled carrots, dug potatoes, and gathered okra beneath the oppressive Southern sun.

They picked cotton, chopped weeds along snake-infested canals, and dug drainage ditches with dull-edged spades. The farms stretched over thousands upon thousands of acres, 28 square miles in all. Mounted guards with automatic rifles waited patiently for someone to step out of line—there would be only one warning shot.

Field work was backbreaking and demeaning. Prisoners constantly sought ways around it. Feigning illness and injury rarely worked unless there was visible blood or bone.

There was, however, one ticket to a break from the farm lines. Men enrolled in the GED classes received an automatic, half-day waiver from field duty. It was a huge incentive to go to school. In addition to the GED, Angola offered a handful of vocational training schools—but not to everyone.

Angola was—and still is—the prison where most Louisiana lifers were sent. Prison officials thought if you had a life sentence, you weren’t going anywhere. “Back then, the shortest sentences in Angola might have been fifty years,” Hooks said. “Those were the short-termers, the fifty­-year guys.”

The educational doorway was cracked open for lifers not long after Hooks arrived, he said. The change was the result of a lawsuit filed by a man who, like many others, wanted his GED but was blocked. The new opportunities were well­ received, particularly by prisoners who would do almost anything to avoid the line. Including Hooks. He had already completed his high-school education but according to the prison’s education director, that didn’t matter, Hooks said.

Louisiana prisoners serving life sentences were also generally prohibited from higher education in favor of people with known release dates. But new policies and programs introduced under Whitley expanded educational opportunities to all eligible inmates regardless of sentence.

The paralegal and computer technology classes were open to lifers for just a year when, in 1992, Congress removed eligibility for Pell Grants from people who had been sentenced to life without parole or the death penalty – a harbinger of things to come. In September 1993, the college kicked 61 lifers out of its programs, according to The Angolite, but the next year created a scholarship program enabling them to finish the courses.

Hooks already had an interest in the law, as do many people who find themselves in the prison system. When the community college came to Angola, Hooks signed up for the paralegal program, which crammed two years of coursework into one. The course instructor was an attorney who came in every day to conduct the classes. “Being in prison, the first thing dudes wanted to know was about criminal law,” Hooks said. But the instructor told them to slow down—they first needed to learn the basics, which included worker’s compensation, civil law, and real estate.

That instructor, Lynda Price, helped Hooks and several other prisoners file suit in federal court when it became clear the program would be shut down because of the Pell ban, Hooks said. They asked for an injunction against shutting down the classes, since they were already underway and paid for through Pell. Ultimately, the court dismissed the case, finding that the men had no constitutional right to a postsecondary education. 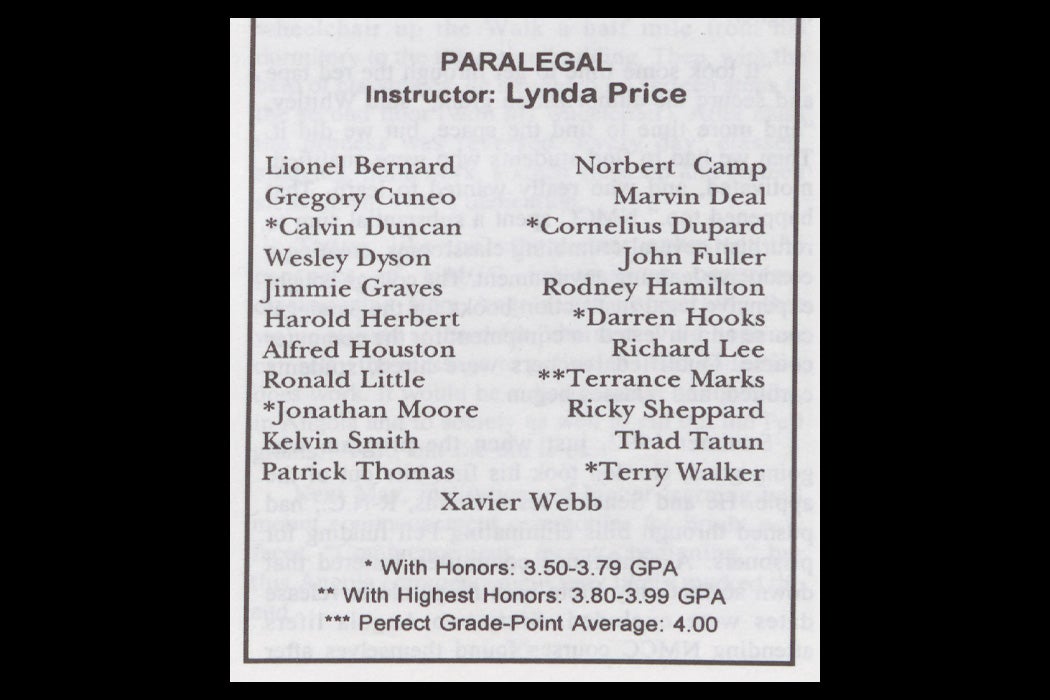 By that time, Hooks had completed most of his studies, but students who had only recently begun their education had the rug pulled out from under them. In the end, education lost out to politics when Congress passed the 1994 crime bill. Pell was no more. By February 1995, NMCC had pulled out of Angola entirely, with Price and other faculty members losing their jobs.

After graduating, Hooks returned to a kitchen job. When the New Orleans Baptist Theological Seminary established an Angola campus in 1995, Hooks was lured by the prospect of earning a degree, not to mention the fact the classes were funded privately at no-cost to the students. Hooks enrolled, earning his bachelors degree in Christian ministry several years later.

While Hooks was still a seminary student, Burl Cain, the warden who came in after Whitley in 1995, announced that there was a dearth of qualified inmate counsel substitutes in the law library to help the population with its legal issues. Building on the foundation laid by the paralegal course, Hooks jumped at the opportunity.  He dropped out of the seminary, and was assigned to his new job in the law library in 1997. He’s been there ever since, currently earning 85 cents an hour.

While Hooks’ paralegal career has been behind bars, other members of the last class have been able to use their education on the outside. Lionel Berniard, who was quoted in the 1994 Angolite article, used his paralegal education to win a reversal and successfully reduce his charges from second degree murder to manslaughter.

He was released in 2001 after serving 16 years at Angola and opened his own paralegal business, which allowed him to reintegrate into society, earn a living and start a family, he said.

Another member of the last class was Calvin Duncan, who was released in 2011 after serving almost 30 years for murder he didn’t commit. He was exonerated in 2021.

Like Hooks, Duncan worked in the Angola law library. After he got out, he pursued a paralegal degree at Tulane University and was on the legal team for the 2020 Supreme Court decision, Ramos v. Louisiana, which struck down non-unanimous juries as unconstitutional. Now he’s enrolled at Lewis & Clark Law School in Portland, Oregon.

“Being in prison for a crime I didn’t commit and the state seeking to have me executed forced me to learn the law to save myself from execution,” he said. “The paralegal program helped me learn legal concepts and how to properly read court opinions and how to apply the law to the facts.”

Over the last 28 years, Hooks has assisted prisoners with thousands of court claims, many of which have successfully granted relief. He is also a lead speaker when tours stop by the law library, explaining to academics, professionals, students, and others—including the 2003 Miss America—how a team of prison paralegals take on the criminal justice system every day.

Hooks said he’s humbled knowing that he was a member of Angola’s “last class” before Pell Grants were eliminated. For those who came after him, the lack of educational opportunities in prison “meant a continuing cycle of illiteracy and poverty.”

For Hooks, a Pell-funded paralegal education has given him a meaningful career in the Angola law library that has lasted 28 years. Hooks said a lot of men from his generation thought “‘’College ain’t for me.’ When I got there, I realized that college is for anybody. The important thing is what you want to do with the education from college that you get.” 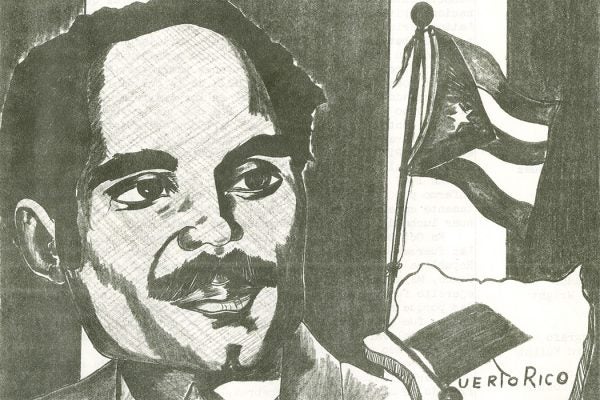