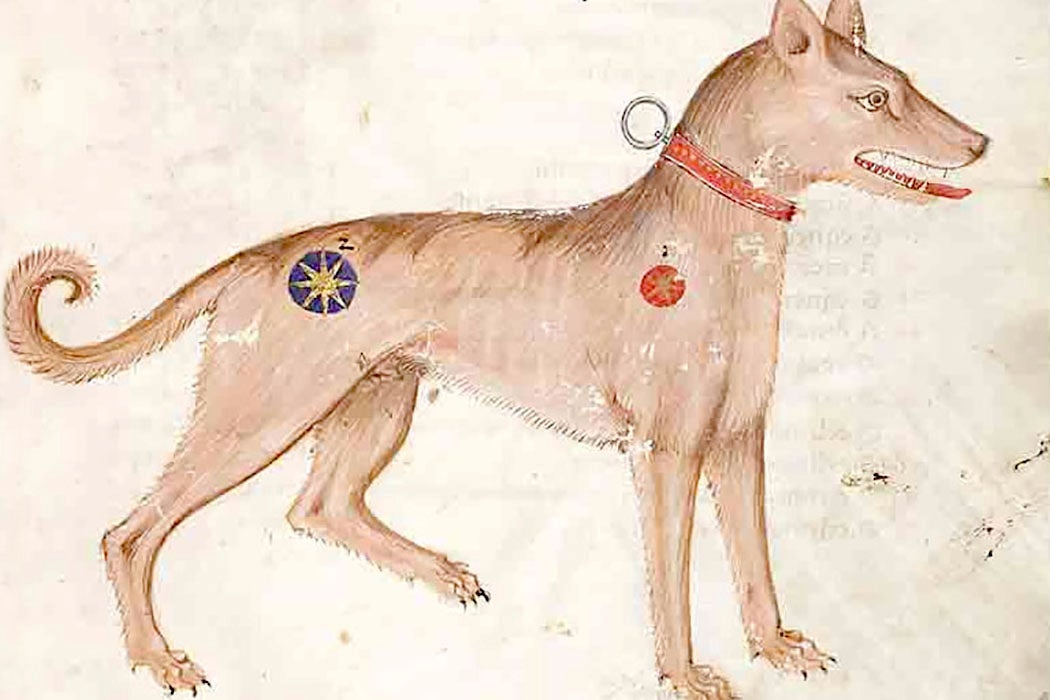 Medieval illumination of a dog, 14th century, from a Codex in the Czech Republic
via Wikimedia Commons
By: Livia Gershon
3 minutes
Share Tweet Email Print

Most dogs today are slackers. A few have jobs—as guides for blind humans or K-9 officers, for example. But the range of employment open to canine workers is nothing like it was in medieval Europe, as historian Carole Rawcliffe explains.

In his influential sixteenth-century treatise Of Englishe Dogges, physician John Caius followed the medieval practice of categorizing dogs mostly by “office,” not breed. Hunting dogs and “gentle” lapdogs stood at the top of the social hierarchy. At the bottom were dogs of the “mungrell and rascal sort” who failed to “exercise any worthy property of the true perfect and gentle kind.”

Rawcliffe writes that laws reinforced the status hierarchies among dogs. One barred people without landed income from keeping hunting dogs. The idea was that artisans, tradesmen, and laborers might use the dogs to help poach game—and possibly use hunting expeditions as cover for rebellious conspiracies.

Some dogs had jobs turning spits in kitchens, using a wheel to rotate the meat over a fire.

Among the commoner ranks, some dogs had jobs turning spits in kitchens, using a wheel to rotate the meat over a fire. All sorts of dogs, generally of the lower-class varieties, acted as guide dogs. Others did tricks to earn money for “theyr vagabundicall masters.”

Rawcliffe writes that a very common kind of dog, an ancestor of the bull terrier, worked for butchers, helping them to drive animals from the country to the slaughterhouse. They were easy to keep since they could live on the offal from the butchered animals. (A Southampton jury complained about butchers throwing ox heads to their dogs on the city streets “to the annoyance of the Kings people and contrary to the honest ordre of this towne.”)

Butchers’ dogs also worked in the popular blood sports of bear baiting and bull baiting. They were equipped with spiked metal collars and forced to fight the larger animals.

Many kinds of dogs guarded homes, businesses, and even cathedrals, Rawcliffe writes. Large, well-trained “house hunds” were so prized as guards that Scottish law required anyone who killed one of them to stand watch in their place for the next year. The most valuable guard dogs were mastiffs, the breed used to protect London Bridge. Caius described them as “vaste, huge, stubborn, ougly, and eager,” capable of striking “feare and terror” with their “bigge barcking.”

But dogs were not always rewarded well for their hard work. Authorities were quick to have troublesome ones destroyed. And it was easy for dogs to become troublesome. Some attacked flocks of sheep and herds of cows on their way to and from city markets. Some went after humans as well, as demonstrated by the many remedies for dog bites found in recipe books.

Lower-status canines might also be snatched for use in medicine. One cure for mania called for the application of the warm body of an eviscerated “younge whelpe” to the shaved head of the patient. To treat tuberculosis, another authority suggested boiling newborn puppies and bathing in the water to absorb the creatures’ warmth.

Even for the canines who escaped such fates, medieval life for canine commoners makes the lives of most canine pets today look remarkably luxurious.

Town Tykes and Butchers' Hounds
By: Carole Rawcliffe
Medieval Prosopography, Vol. 33, SPECIAL ISSUE: THOSE WHO WORKED, THOSE WHO FOUGHT, AND THOSE WHO PRAYED IN HONOR OF JOEL T. ROSENTHAL (2018), pp. 45-62
Board of Trustees of Western Michigan University through its Medieval Institute Publications