The Greening of the Great Basin

The growth of grass in a desert might not seem problematic, but the introduction of invasive species can disrupt plant, animal, and human inhabitants. 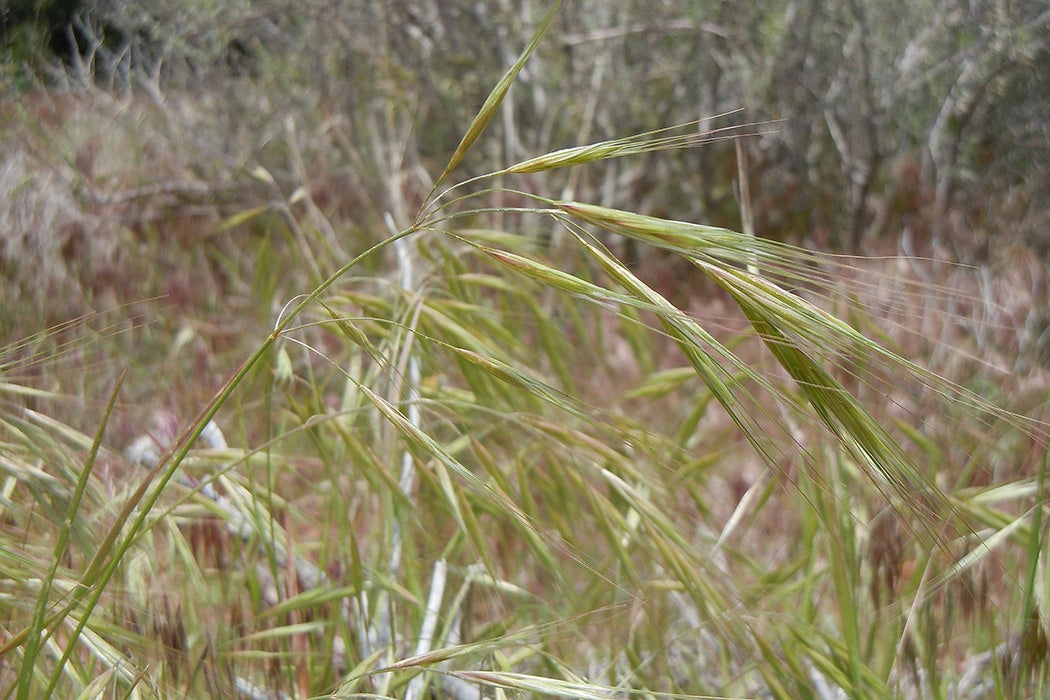 The stark landscapes of the American West have often been used as shorthand for both the imagined freedom of the wild west and dangerous barrenness (see: the recent film Don’t Worry Darling). If there’s a direct opposite to this eremophobia, it may be the particularly American desire for grass and all its suggestions of order, abundance, and prosperity. These tropes, however, are being tested in the face of rapid climate change and globalized plant exchange, where shifting biomes and invasive species are forcibly reshaping whole ecosystems.

The arid and semiarid Great Basin of the western United States comprises parts of California, Nevada, Utah, Idaho, and Oregon and can variously be described by its hydrology, topography, or biology. Biologically, the area has been defined historically by the native sagebrush and shrubs that thrive in the dry valleys of the Sierra Nevada and Cascade Mountains. But, as a recent study undertaken by researchers at the University of Montana and the Department of Agriculture notes, these native plant communities are rapidly being colonized by nonnative annual grasses like cheatgrass (Bromus tectorum), red brome (B. rubens), and medusahead (Taeniatherum caput-medusae) to the detriment of wildlife and humans.

The grasses form a pathway between disparate clusters of native brushgrasses and shrubs, allowing wildfires to blaze through.

To the casual observer, the greening of a desert might not seem like a problematic development. Global efforts like the Great Green Wall in the Sahara and China’s reforestation of the Gobi suggest that native desert ecologies are precarious and insupportable for human habitation. But desert ecosystems are delicately balanced networks amid the global patchwork of biomes, and exotic vegetation supplanting native biotic communities—as nonnative grasses in the Great Basin are—can substantially disrupt plant, animal, and human inhabitants. According to Smith et al., “among diverse ecosystems across several continents, consequences of grass invasions include increased risk to human life and property from larger and/or more frequent wildfires, […] disruption of hydrologic and nutrient cycles [….] and reduced biodiversity across trophic levels.”

Conversion of the vegetation in the Great Basin to grasses also “entails [a] significant loss of biomass carbon” and eliminates keystone species such as sagebrush and other shrubs that support the region’s wildlife. They also make the area more flammable: the grasses form a pathway between disparate clusters of native brushgrasses and shrubs, allowing wildfires to blaze through. The grasses are then among the first species to become re-established in the post-fire environment, creating a cycle of invasion, fire, and exclusion of native competitors. And, as the climate has warmed, conditions have allowed the grasses to thrive at ever higher elevations in the mountainous areas of the Great Basin.

Using high resolution Landsat satellite imagery in a program known as the Rangeland Analysis Platform, Smith et al. mapped the dominance of the exotic annual grasses for every year between 1990 and 2020 for three regions of the Great Basin. The program sorted each pixel of the images into visible clusters, allowing the researchers to calculate and map the areal spread of the grasses across the thirty years, revealing a greater than eight-fold increase in annual grass coverage between 1990 and 2020 at a rate of  more than 2,300 km2 each year—a rate proportionally greater than the recent deforestation of the Amazon. Smith et al. conservatively estimate that exotic grasses comprised 77,617 km2 of the Great Basin in 2020, or about a fifth (19.8 percent) of the historically defined rangelands.

Reclaiming the shrubland from the exotic grasses would require sustained, aggressive intervention. Given finite material resources and societal support for this kind of undertaking, Smith et al. counsel that the best courses of action will be to prevent any further conversion of rangeland. “Without increased investment and a paradigm shift in management mindset,” they warn, “archetypal shrubland ecosystems of the Great Basin could be largely transformed into highly flammable, depauperate annual-dominated grasslands and woodlands within a lifetime.”