The Fable of the Fourteen Points 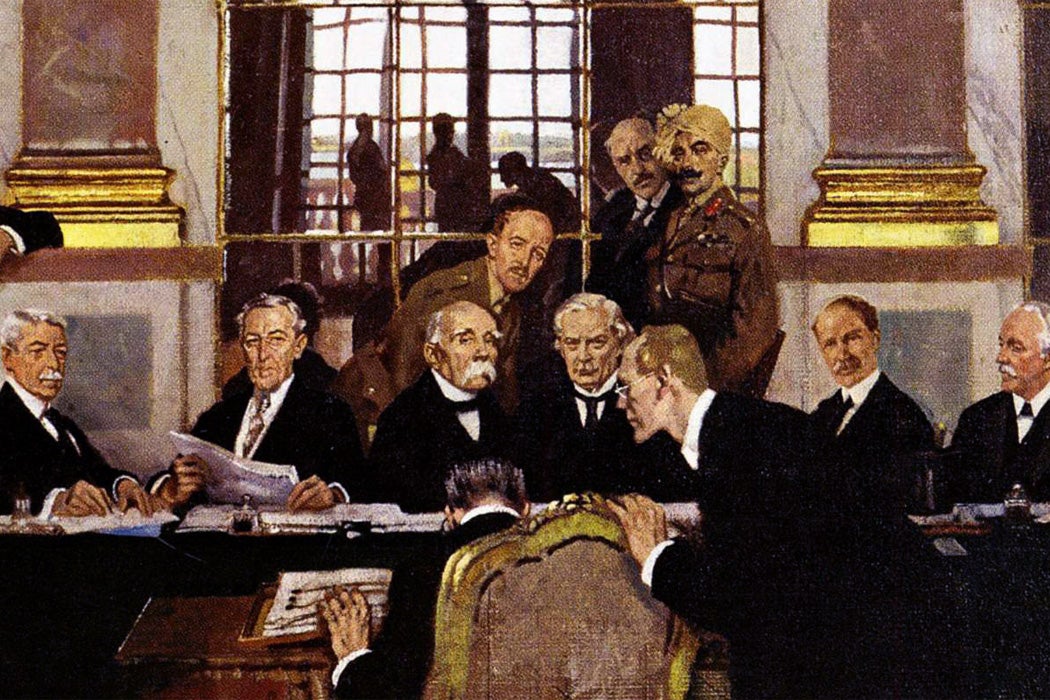 From The Signing of Peace in the Hall of Mirrors, Versailles 1919 by William Orpen
via Wikimedia Commons
By: Matthew Wills
3 minutes
Share Tweet Email Print

On January 19th, 1919, the Paris Peace Conference got underway. It was an effort to formally end the Great War and remake the world. Waiting in the wings of the conference were representatives from around the world eagerly awaiting the manifestation of Woodrow Wilson’s supposedly ringing endorsement of “self-determination,” the ability of groups of people to form their own states and choose their own governments.

By the time the Treaty of Versailles was signed in June of 1919, it was clear that Wilsonian self-determination wasn’t actually all that real. All of the colonial powers except for defeated Germany remained. Hopes for independence in Ireland, India, Asia, and Africa were dashed. The Ottoman Empire, brought down in part by promises of independence to the Arabs, would be chopped up into “mandates” of Britain and France.

Giving colonial subjects equal weight to their colonial rulers was a challenge to imperialism, but it wasn’t exactly a call for self-determination.

Many felt betrayed by Wilson. Others blamed him for helping set the stage for WWII, particularly with the new map of Europe that resulted from the treaty. Historian Trygve Throntveit, however, argues that Woodrow Wilson’s legendary support for “self-determination” is indeed just a legend:

national self determination—the principle that groups bound by common language or lines a descent have a right to political and territorial independence—was not one of Wilson’s Fourteen Points and was never central to his peace program.

The Fourteen Points were a framework for peace Wilson articulated to Congress in January 1918, ten months before the war was over. The points were adopted at Paris as the basis for peace negotiations after hostilities ceased.

Throntveit writes that in this framework, Wilson never supported “ethnic nation-states.” Instead, Wilson’s dream was an “integrative internationalism,” epitomized by the League of Nations. This body, in Wilson’s mind, was something akin to a global European Union, with “significant concessions of sovereignty from its members.” Throntveit calls Wilson’s idea of world government radical for its time. It was also misunderstood and misinterpreted, not least because Wilson was so vague about it all, “quietly ignoring the false ascription of ‘self-determination’ to him.”

That ascription is writ large in history. Even the National Archives’ introduction to the Fourteen Points speech refers to the “promise of ‘self-determination’ for those oppressed minorities.” The phrase “self-determination,” however, isn’t even in the speech itself. The fifth “point” does refer to colonialism, arguing that “the populations concerned must have equal weight with the equitable claims of the Government whose title is to be determined.” Giving colonial subjects equal weight to their colonial rulers was a challenge to imperialism, but it wasn’t exactly a call for self-determination.

Throntveit suggests that Wilson’s “failure of leadership” combined with general confusion about the notions of self-determination voiced by both Prime Minister Lloyd George and Russia’s V.I. Lenin. Still, even members of his own government credited Wilson with the notion of self-determination. One of of Wilson’s Paris Peace commissioners, William C. Bullitt, publicly resigned in dismay after reading the draft of the Treaty of Versailles, which Wilson—acting, in Throntviet’s phrase, as “lone-wolf”—negotiated without the help of his own commissioners. Bullitt charged Wilson with betraying what he thought Wilson’s notion of self-determination was. The treaty, argued Bullitt, instead delivered “the suffering peoples of the world to new oppressions, subjections, and dismemberments.”

Throntveit concludes that “the tragedy of Wilson’s lone-wolf act is that nations and would-be nations around the world adopted the role as well, while self-styled leaders of various ideological packs have too often hunted for themselves.”

In the end, the Peace Conference didn’t quite get the job done. After all, the Great War, as the 1914-1918 conflict was originally called, would within a couple of generations become known as merely the First World War.