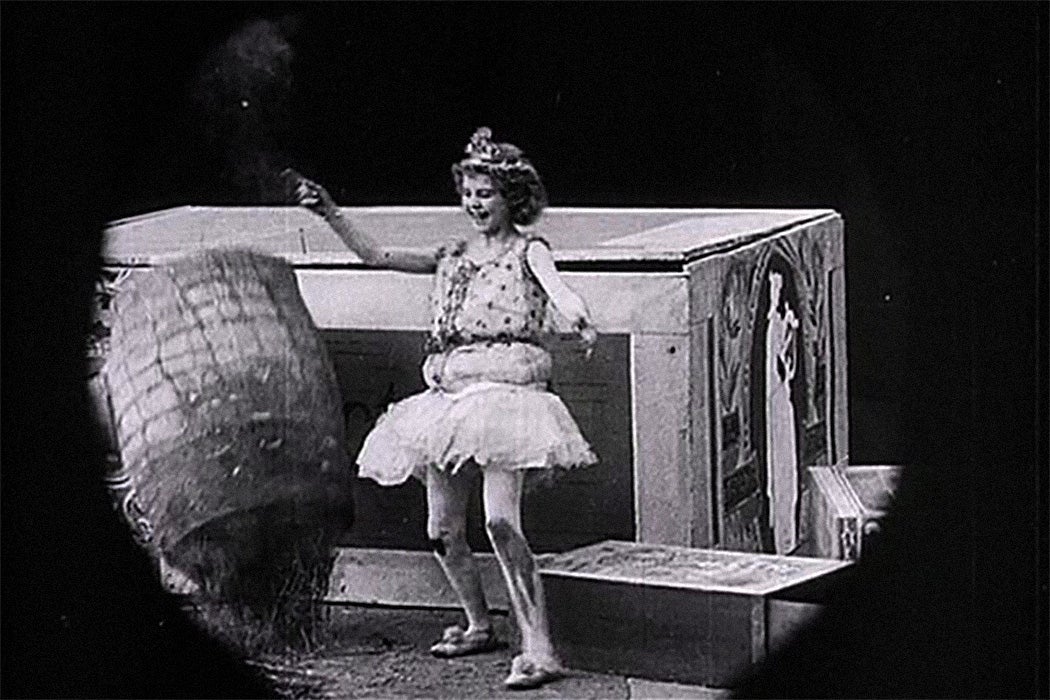 In silent movies of the early twentieth century, the female form was in constant peril. Women literally exploded over kitchen accidents; grew or shrank several sizes; collapsed into one another; or disappeared with the wave of a hand. Transforming into a skeleton was not out of the question, nor was flying across the sky as a ghost. These alarming modulations were the hallmark of trick films, early shorts designed to showcase the latest in special effects. These movies featured a variety of actors in all sorts of unimaginable situations, but the tricks played out differently if the subject was a working class woman.

Trick films are most frequently associated with Georges Melies, the French director who drew on Parisian theater techniques to create jaw-dropping spectacles for the camera. These movies were popular outside of France, and the “tricks” were the selling point. The film professor Ian Christie references a 1901 film catalog advertising the short The Magic Sword as “a sumptuously produced extravaganza in three dissolving scenes, with many novel and beautiful trick effects, now introduced for the first time.”

Filmmakers across the globe were in constant competition to come up with the next celluloid sleight of hand.

That “for the first time” was important. The whole idea was to show audiences something they hadn’t seen before, something so wondrous or disturbing they couldn’t fathom it. Filmmakers across the globe were in constant competition to come up with the next celluloid sleight of hand.

But, as the cultural scholar Maggie Hennefeld argues, women’s bodies went through unique transformations in these films, often for comedic effect. They didn’t just vanish, as in 1900’s The Mystic Swing, or take on an impossibly tiny form, like the mischievous fairies in 1909’s Princess Nicotine. There was a whole range of possible alterations. Hennefeld groups them into eight categories:

• combustion (women exploding);
• micrographia (women figured in miniature);
• dismemberment (the live-action animation of women’s body parts);
• quick-change metamorphosis (a total change in appearance or visibility);
• gradual metamorphosis (a gradual bodily metamorphosis through dissolves, superimpositions, pans, wipes, etc.);
• tableau vivant (women posing as paintings or statues and then spontaneously rousing to life);
• undercranking (the absurd speeding up of bodily movements); and
• slapstick corporeality (the body refuses to undergo change, even if this means defying every conceivable law of physics).

Male actors were subjected to these transformations as well, but the tricks took on a different meaning when a woman was the one being dismembered. “Women’s visual metamorphoses onscreen often intersected with anxieties about the societal changes both represented and provoked by the new medium of cinema,” Hennefeld writes.

The 1903 British short Mary Jane’s Mishap is perhaps the best example of this form. In it, an accident-prone maid attempts to go about her daily work, but first smears soot all over her face and then fills the fireplace with paraffin, blowing herself clean out of the chimney. She later reappears as a shimmering specter, hovering over her own grave.

Maids also set off explosions or electrocutions in A Shocking Incident and Nora’s 4th of July, where their lethal incompetence is played for laughs. Sometimes, the maid was Irish, nodding to xenophobic stereotypes about the Irish immigrants heading to America in the wake of the potato famine. These films weren’t just broad, lazy jokes on working class women. As Hennefeld notes, they replicated a horrifying trend that affected women across classes.

Crinoline cage skirts were popular in the mid- to late-1800s. They gave dresses a full bell shape without requiring layers of petticoats. The material, however, was extremely flammable, so it was not uncommon for a woman to accidentally set herself ablaze while cooking or merely standing too close to the hearth. Although these accidents severely injured or killed victims who couldn’t stamp out the fire in time, they were treated as a laughing matter in the press, who mocked the “crinoline terror” in exposes.

Trick films copied this tone with the exploding maid shorts, which mined humor out of human tragedy. Like the newspaper articles, these films employed the age-old comedic trope of skewering women as frivolous, even as they were following the rigid societal expectations of the day. There was no respite or room for error for women performing domestic labor, not even when they were a walking fire hazard.

Exploding maids, and trick films in general, lost steam in the 1910s, as filmmaking shifted to longer narrative storytelling. But modern movies still employ similar transformations today through undercranking, dissolves, and the ever-popular body swap comedy—and of course, films from Mrs. Doubtfire to American Hustle love an explosive kitchen fire, especially when it ribs the domestic capabilities of the woman who started it.