The Theatrical Magic of The Christmas Angel

The silent film director Georges Melies made a unique and wonderful Christmas film by borrowing the theatrical techniques of French “feeries.” 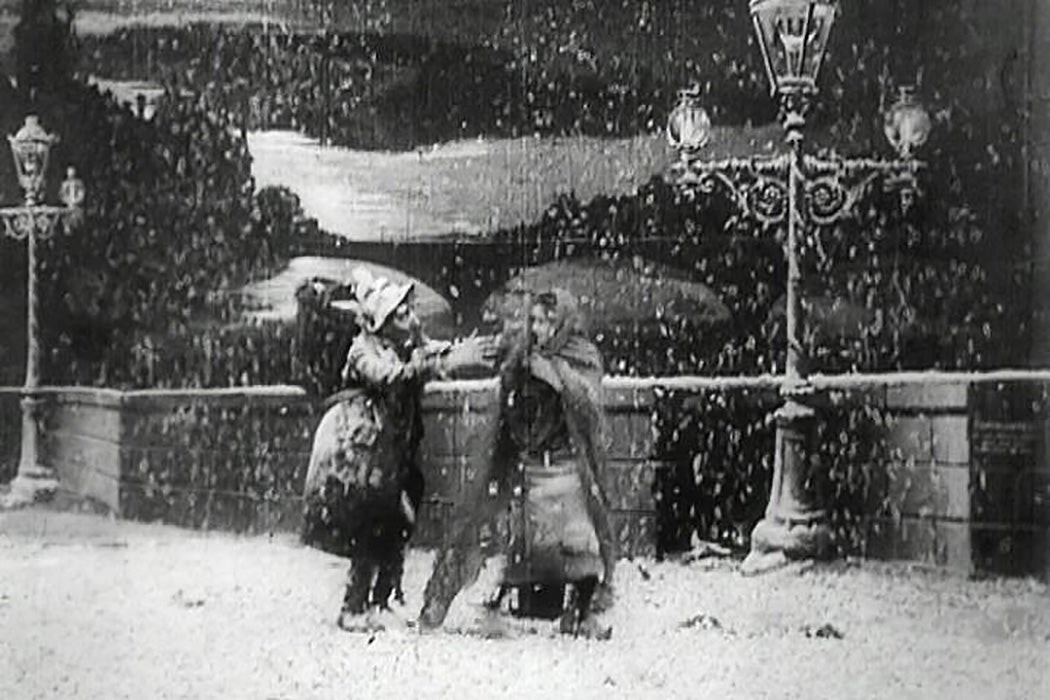 In The Christmas Angel, holiday kindness is hard to come by. The 1904 silent short follows a poor young girl, whose father sends her out into the streets to beg for money for her sick mother. Although the snowy sidewalks, lit with gas lamps, look dreamy and picturesque, the girl finds little comfort there. People scold her for begging, raising their hands to shoo her away. Exhausted and freezing, she collapses in the snow. However, in a bit of yuletide magic, a rich couple leap out of their car, rescuing the girl from certain death, then sending her home with heaps of food and presents. Moments before her safe return, the girls’ parents see an angel in their home. Someone has been watching over her.

As the title implies, The Christmas Angel has a touch of the fantastical, but this movie was relatively muted for director Georges Melies, the magician turned filmmaker who created movies with vanishing ladies, animated statues, and giant disembodied heads. Melies would become famous for his pioneering special effects, which built on tricks and techniques from the Parisian theater—specifically, the “feerie” genre, which astounded audiences in the 1800s.

According to the late film scholar Katherine Singer Kovacs, feeries emerged in the aftermath of the French Revolution, as a form of mass entertainment for new theater-goers seeking “thrills, excitement, and surprises.” Feeries borrowed plot elements from fairy tales, leaning heavily on sprites, demons, and other supernatural beings. What made them unique was the way they brought these creatures to life through elaborate costumes and set-pieces. “Like melodramas, the plots of most feeries pivoted upon a struggle between forces of good and evil,” Singer Kovacs writes in Cinema Journal. “But while these forces remained invisible in melodramas, in feeries they were incarnated onstage.”

Nineteenth century stage crews worked to make these magical worlds dynamic and exciting. By rigging painted backdrops to a rope, they could instantly change the scene, transporting audiences to a new setting with one quick pull. (They employed a similar technique for costume changes. Two outfits were joined together with cords that, when pulled, laid the other costume over top, so the actors never had to remove their garments.) With the arrival of gas and limelights, set designers could cast moonbeams or eerie, atmospheric lighting.

But that was all basic theater trickery. Singer Kovacs describes a more intricate illusion from the 1839 play Les Pilules du Diable. In this story, the villain, Sottinez, is chasing the romantic leads on a train. Then the entire locomotive blows up. Pieces of Sottinez’s body scatter across the stage, which the other characters gather and piece back together. Eventually, he is reassembled and reanimated, and picks back up right where he left off. This was achieved by a rather meticulous process in which the actor playing Sottinez hid behind the set. As his costars slotted mannequin pieces into the human-shaped outline, he quietly replaced them with his own body parts, contorting until he was “whole” again.

The arrival of film allowed Melies to build upon these creative sleights of hand. He devised his effects not in a theater, but out of his studio at Montreuil-sous-Bois, a grand glass building where he experimented with otherworldly tableaus and new techniques like stop motion. With the power of film editing, his imaginative scenes required less effort than their feerie counterparts on stage. There was no need for costume cords or falling flaps when you could simply call cut and reset a scene.

But Melies did much more than that. Take, for instance, the way he shot ghosts. Singer Kovacs writes:

Instead of presenting spectres behind gauze at the rear of the stage or throwing them above the actors with magic lanterns, Melies would film the apparition before or after shooting the scene on a white background, stop the camera, wind the film back, and reshoot in order to obtain superimposition.

His ingenuity didn’t end there. To give the illusion of vehicles flying into the sky, Melies suspended the actual life-sized vehicle with wires and placed the actors inside it, just as a theater director would, but then incorporated miniature models to complete the illusion of flight. Through these flourishes, his movies frequently looked like pages out of a storybook, packed with all the flash of the magic shows Melies performed in his youth.

Perhaps this is why The Christmas Angel doesn’t feel quite like Melies. The film professor Elizabeth Ezra calls it one of Melies’s “foray[s] into realist filmmaking,” which was where the burgeoning movie industry was heading at the time. “In fact, this trend towards realism is what is often cited as the cause of Melies’s downfall, as his fanciful films were being passed over increasingly for more realistic films,” Ezra writes in her Melies biography. Melies couldn’t ride the trend towards naturalism, and went bankrupt by World War I. He wound up running a candy store, forgotten until new fans rediscovered him in the late 1920s. More than a century later, he’s remembered by still newer fans as a surrealist master and innovator precisely for these “fanciful” films, full-blown feerie dreamscapes where the heroes meet mermaids and shoot spaceships into the moon’s eye.

Georges Méliès and the "Féerie"
By: Katherine Singer Kovács
Cinema Journal, Vol. 16, No. 1 (Autumn, 1976), pp. 1-13
University of Texas Press on behalf of the Society for Cinema & Media Studies 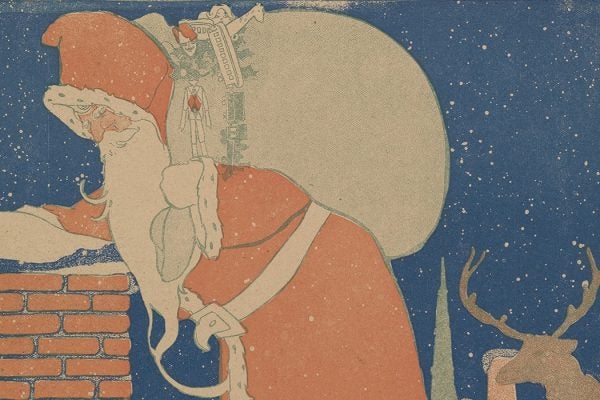