The Ethics of Research on Captive Dolphins

Researchers say that dolphins are so smart that captivity causes them psychological harm. But getting data in the open ocean can be tricky. 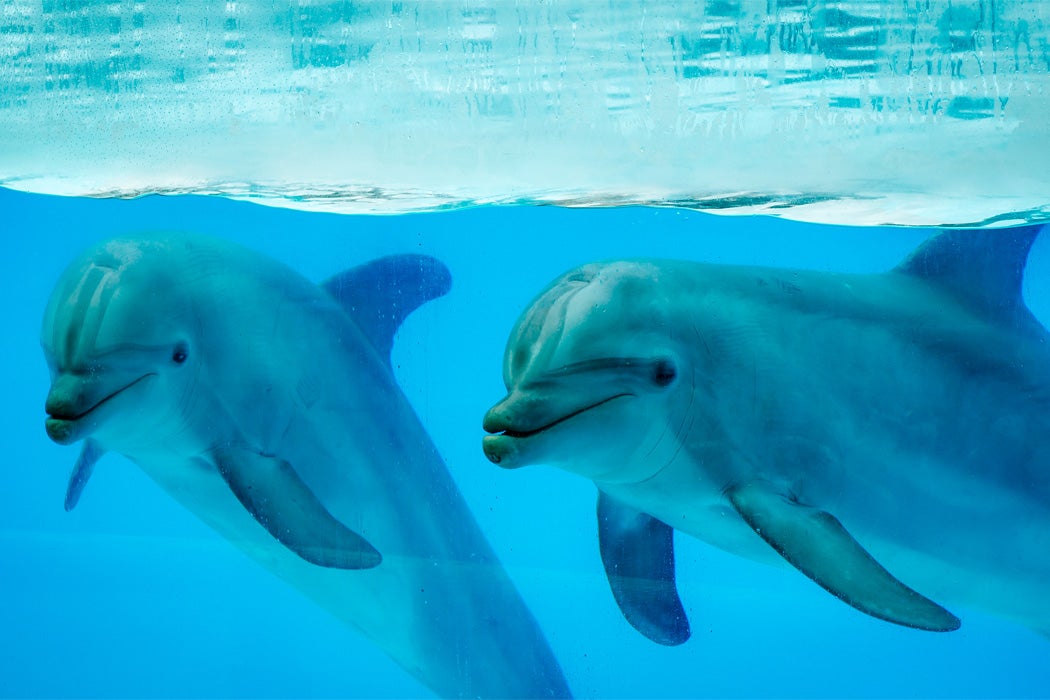 Should dolphins be in captivity? In much of the western world, dolphin shows are falling out of favor. Corporations are beginning to cut ties with places that provide them. Much of this can be attributed to revelations about the dark underbelly of the captive cetacean industry, including the brutal drive fishery used to acquire some dolphins. But while dolphin experts largely agree that dolphin and whale shows purely for entertainment are not worth it, research is more controversial.

In a 2011 article in Science, David Grimm lays out the ethics and efficacy of captive dolphin research. The arguments assume humane acquisition, so the controversy centers on dolphin intelligence. The issue is less the absolute level of dolphin intelligence—which is itself debated—but whether their intelligence is above a threshold that makes captivity unbearable.

No matter how big a tank there is, it can never simulate the vast open spaces of the ocean.

Opponents of captive research note that no matter how big a tank there is, it can never simulate the vast open spaces of the ocean. Noting dolphins’ large brains, complicated communications, and social lives, opponents view being stuck in a barren tank as akin to psychological torture. An experiment showing that dolphins can recognize their own reflection has led many researchers to believe that dolphins are self-aware, a level of cognition incompatible with captivity.

Captive conditions frequently lead to dolphin deaths, through accidents, infections, and never-ending stress, although the exact rate of mortality in captive vs. wild dolphins is disputed and difficult to measure. Similar arguments apply to keeping elephants and other large mammals, and many zoos are indeed phasing such animals out of their collections.

Proponents of captive research counter that the only reason anyone knows how smart dolphins are is that studies have been done on captive dolphins. In the vastness of the ocean, it is extremely difficult to collect quality data. To understand and  protect dolphins, some captive animals must be examined. Captive research has also led to information crucial for conservation, such as findings on noise sensitivity and physiology. And knowledge gleaned from captives aids in the rescue of stranded or injured wild dolphins. Further, advocates point out, the open ocean isn’t always a happy place. Plenty of wild dolphins die brutally through shark attack, starvation, and the like.

The issue for most researchers, according to Grimm, is how to get the data they want. Most scientists studying captive dolphin cognition would study wild dolphins, but don’t have good methods for conducting studies. (Some scientists do work exclusively with wild dolphins.) Most researchers also agree that dolphin facilities should be as nice as possible.

A final, related problem is that most dolphins are very social, so living a solitary life in a tank—or with artificially selected roommates—may not be a perfect approximation of dolphin life. Until cognitive research in wild dolphins is easier, the question is whether the knowledge gained is valuable enough to offset any discomfort the animals experience. And on that point, the disagreement persists.