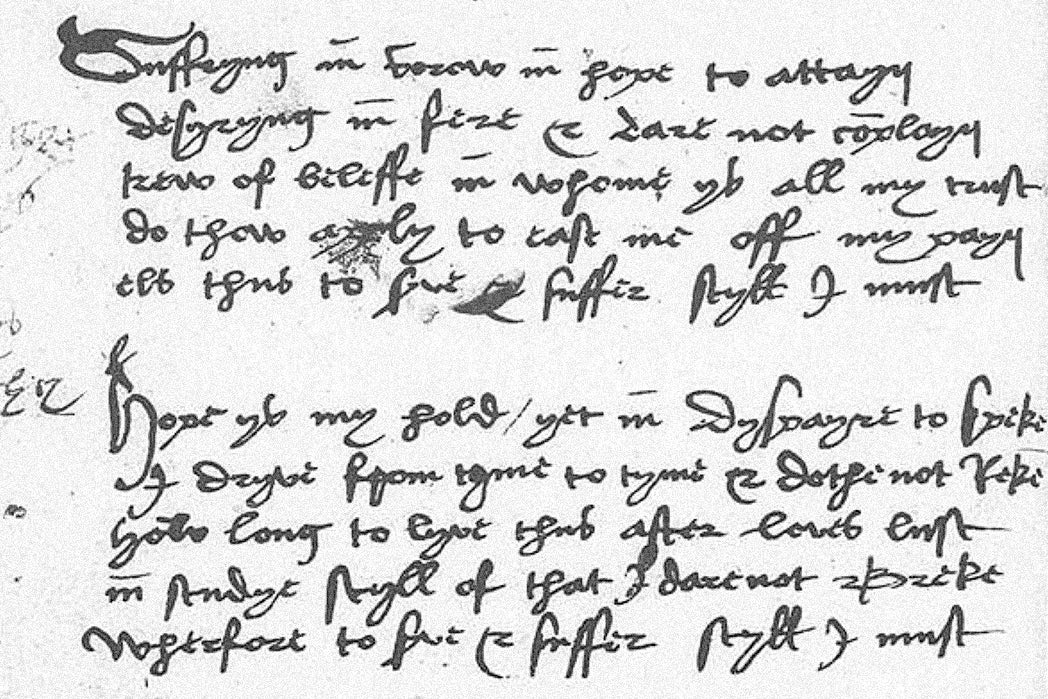 Thomas Wyatt, the possible paramour of Anne Boleyn. Lady Margaret Douglas, the daughter of the queen dowager of Scotland. Mary Shelton, a mistress of England’s King Henry VIII. And Henry Stuart, Lady Margaret’s son, who married Mary, Queen of Scots. These were some of the most fascinating figures and accomplished writers at the English court in the mid-sixteenth century. If one wishes that their poetry could be accumulated into a single volume, that wish is already granted. Their writing makes up the so-called Devonshire Manuscript, offering contemporary readers a glimpse of intellectual and emotional life at the Tudor courts.

At the Tudor and Elizabethan courts, there seemed to be a standard of equality and respect uniting those who composed the verses captured in the manuscript.

The manuscript is recognized not only as a major literary relic of the English Renaissance—entries date to as early as the 1530s and as late as the 1560s—but also as an indicator of the possibility of gender impartiality amongst the upper classes. At the Tudor and Elizabethan courts, there seemed to be a standard of equality and respect uniting those who composed the verses captured in the manuscript. The existing folios feature their work neutrally, with no partiality given to the men’s writings over the women’s.

As such, the cultural side of Henry VIII’s court appeared to operate as a separate entity from the misogynistic political and domestic climate cultivated by a king who regularly disposed of wives—he had six of them—and mistresses as easily as he would cast off garments. Women were, contrary to popular belief, appreciated for their intellect and wit in this period, as both the muses and as the creators of romantic poetry. There were factions that didn’t support women’s involvement in the arts, but as analyst Christopher Shirley remarks in his deconstruction of the Devonshire Manuscript’s gender themes, at least a few well-educated women persevered in their writing and criticism, with visible results: “They thus participated in this literary culture despite its apparent hostility toward women; the Devonshire manuscript, laced with traces of their activity, witnesses their agile performances of identity within the coterie of the Henrician court.”

The Devonshire Manuscript continues to enthrall scholars looking to assemble an exact timeline based on its contents and chirography. Its creation is attributed to the scholarly noblewoman Mary Fitzroy née Howard (1519–1557), who is remembered not so much for her devotion to poetry but for being the wife of Henry VIII’s illegitimate son, Henry Fitzroy, Duke of Richmond. Though she bore no children, Mary Howard did give birth to this collection of verse. A notebook was passed around Howard’s circle of acquaintances, several of whom, both men and women, scribbled in their best lines, favorite poems from the medieval era, and critiques of one another’s efforts.

Howard’s own addition to the manuscript was a hand-copied version of her brother Henry’s poem, “Oh happy dames,” which scholar Helen Baron cites as  invaluable evidence of Mary Howard’s commitment to the enterprise. The poem also offers a clue to the manuscript’s timeline (though Baron is less enthusiastic about Howard’s handwriting, which was “so untidy as to suggest carelessness”):

If therefore each document [of Mary Howard’s personal letters] represents her painstaking best, it is reasonable to assume that her transcription of the poem was also intended to be a fair copy. If, moreover, the deterioration in her writing was progressive and not sudden, her copy of the poem, which is marginally less cramped and more legible than the last two letters, might with confidence be dated to the years immediately preceding 1549.

The manuscript, like many other fragile tomes from the English literary canon, is safely kept in the archives of the British Library, where it will continue to be the subject of study and debate as long as people continue to cherish poetry. 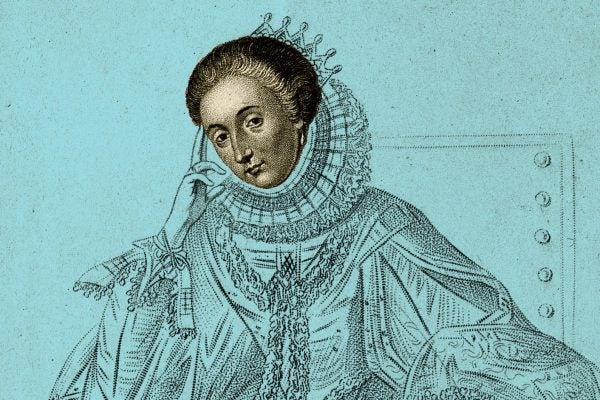 Mary Sidney and the Voice of God

Philip Sidney’s attempt at translating the Psalms ended with his early death. Then, his sister took up the cause—and proved herself the superior poet.