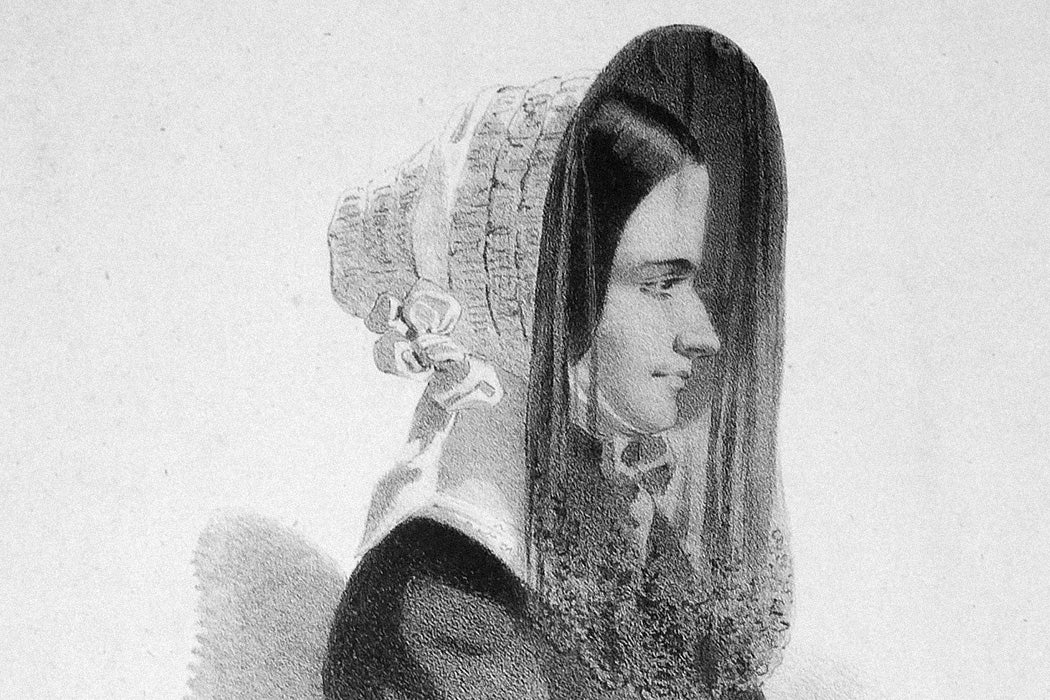 The year is 1840. A sensational trial has captivated the whole of France. The accused is a dark-haired, sophisticated Parisian named Marie Lafarge. Her alleged crime? Murder by means of arsenic poisoning.

A year before the murder, twenty-three-year-old Marie Fortunée Cappelle was married against her will to Charles Lafarge, a brutish ironworker who claimed to be rich but in fact was bankrupt. While on a business trip in Paris, Charles received a cake in the mail from his wife. He soon fell violently ill and died at home two weeks later. When suspicious officials identified arsenic in Charles’s vomit and stomach, Marie was arrested for murder.

Marie’s noble descent, gender, and tragic backstory made her immediately appealing to the Romantic European masses.

The ensuing trial was dramatic, not least because of the novelty of expert forensic testimony. Marie’s noble descent, gender, and tragic backstory made her immediately appealing to the Romantic European masses. Public obsession only grew as the experts started producing increasingly contradictory evidence. Death by arsenic poisoning was already notoriously difficult to prove in court. The Lafarge affair featured a few added challenges, writes science historian José Ramón Bertomeu-Sánchez, including “inconclusive data from clinical symptoms and autopsies,” a long-buried corpse, and “the failure of local experts to detect arsenic by means of old chemical methods.”

Over the course of the trial, three separate groups of medical analysts gave four differing reports on the evidence. In his 1840 analysis of the trial, English doctor Charles Lynch criticized the bungled initial attempts at detecting the arsenic: “No weight can be attached to the report of the Brives Commission,” he wrote, referring to a group of local analysts, “the members of which evinced the grossest ignorance of truths known to the merest tyro in legal medicine.”

The second report discovered arsenic in the eggnog Marie gave her husband while he was bedridden but failed to find arsenic in Charles’s body. The task grew even more challenging when doctors ran out of intestinal matter and had to exhume the corpse to collect more samples of Monsieur Lafarge’s semi-decomposed flesh. These samples were then “analyzed in an improvised laboratory set up near the courtroom,” writes Bertomeu-Sánchez.

Some of the trial’s greatest complications arose from the provincial doctors’ attempts to use the latest advance in forensic investigation: the Marsh test. Invented by chemist John Marsh in 1836, it offered a method to detect arsenic that would also unambiguously prove its existence in front of a jury. A potentially poisoned sample (taken from something like flesh or food) is mixed with zinc and acid, which creates a gas. That gas is lit with a flame. If the gas carries even a minute amount of arsenic, a distinctive metallic film deposits on a porcelain plate.

After attempts at the Marsh test yielded negative results, the defense called for the famous toxicologist, Mateu Orfila, to confirm the lack of arsenic in Charles’s body. This move backfired spectacularly. Orfila, who was actually trained to use Marsh’s apparatus, delivered the trial’s final report “amid great excitement,” writes Bertomeu-Sánchez, “in which he affirmed that he had indeed found arsenic in Lafarge’s body.”

After Orfila presented his findings, Marie Lafarge was found guilty of murder and sentenced to life in prison. Even with Orfila’s evidence, the verdict was extremely controversial.

Word also spread about the power of the Marsh test—the experiment was even performed live in salons during plays that recreated the events of the trial. The test would grow to become “the ‘chief terror of poisoners,’” writes Bertomeu-Sánchez, “uncovering crimes that previously would have gone undetected and eventually leading to a significant decline in the use of arsenic for murder.”