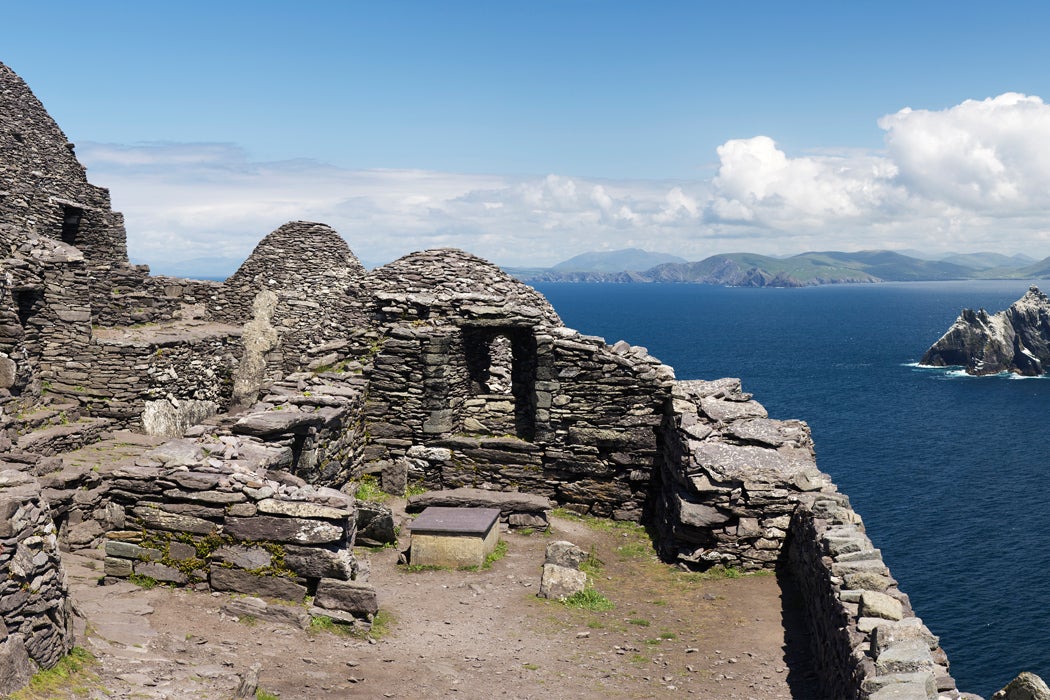 The audience of “Star Wars: The Force Awakens” will be treated to a rare monastic vista lifted straight from the 12th century.

The filmmakers behind the mega-franchise recently spent several days on the island of Skellig Michael, County Kerry, Ireland—a crag of sheer rock with a medieval Irish monastery clinging to its summit. Online scuttlebutt and the presence of a certain Mr. Luke Skywalker Esq. (Mark Hamill) on the island suggested that the UNESCO World Heritage Site may well be standing in for some sort of futuristic Jedi hermitage on an alien planet.

Six cell houses – each one room for one,
a roofless chapel, and almost human, a standing stone.
As far West as one can go. Notched on the edge of dawn.

What better place to depict an ancient, mystical, martial asceticism in a galaxy far, far away than an actual ancient eremitic settlement, dripping with stone-cold monastic austerity, located at what was for centuries the very ends of the earth, seven miles off the very tip of a western Irish peninsula?

The Skelligs (there are two islands) started out as one of the most westerly exposures of Devonian, or Old Red Sandstone, in Western Europe. Laid down by geological forces around 370 million years ago, when what would eventually become the island of Ireland was floating somewhere south of the Equator. Long before humanity itself, along a timeline so deep as to be almost incomprehensible, Skellig was on the edge of everything. An ancient outcrop of an outcrop. Silent and patiently waiting for sentient life to develop the very cognitive ability to comprehend its splendid isolation.

Forgive the flamboyant literary foreplay. Skellig Michael is so much more than a national treasure, you see. Its fang-like twin peaks, rising over 700 feet out of an angry Atlantic Ocean, loom even larger in Irish historical and cultural imagination. George Bernard Shaw called it “an incredible, impossible, mad place.” Something that “does not belong to any world that you and I have lived and worked in. It is part of our dream world.”

In a time of national reimagining of modern identity, the carved crosses and stone beehive huts of Skellig filled the Irish mind with romantic notions of yesteryear. It symbolized an untamed, ancient “Irishness” articulated in rock, stubbornly clinging onto the very edge of Europe—a medieval metaphor for modernity. “Did you ever make the pilgrimage to Skellig Michael?” Shaw wrote to a friend. “If not, you have not yet seen Ireland.”

As to be expected, the recent filming of Star Wars was big news in Ireland, with locals in the area hopeful of an increase in visitor numbers and income. While the government is banking on promoting national heritage and landscapes, others look on with disdain at the use of a World Heritage monastic site in such a manner. Ironically enough, this objection to the cinematic use of the islands’ unearthly aura and archaeology as a vehicle for attracting visitors—pilgrims, curious tourists, or uber fans—runs the risk of missing the very point of its historical existence, because Skellig was precisely this to its earliest inhabitants.

The original Irish impetus in seeking Christian salvation at the ends of the earth was rooted in late antiquity and the influence of the desert fathers of Syria and Egypt. In a country without deserts or cities, early Irish Christians used islands like the Skelligs as dísearta (“desert”) hermitages, which eventually became popular places for local and regional pilgrimage. Operating under a tangled umbrella of secular sponsorship and competing ecclesiastical federations, such hermitage sites sought to facilitate access to the ritual power and sanctity of earlier Irish saints—trading on the proximity and residual presence of their “holy ones.”

The surviving archaeology on Skellig Michael is a prime example of later medieval Irish pilgrim activity. It consists of several hundred rocky steps leading upwards from three different landing sites. The gap between its two craggy peaks is known as “Christ’s Saddle.”

Near the summit of the first peak sit the well preserved stone remains of monastic infrastructure—a church, two oratories, seven beehive shaped cells, a cemetery, stone crosses, penitential stations, and leachta (external stone altars, sometimes called “Saint’s Beds” in Irish). All rest within protective artificial terraces and thick enclosing walls. On the south peak, one finds an even more remote hermitage, presumably offering even further isolation for those who were not satisfied with the first: rock-cut ledges, platforms and terraces with an oratory, altar, leacht, and probable shrine.

This is Shaw’s impossible world in an inhospitable place, and people have been coming to marvel at the island’s splendid isolation for centuries. Ironically, what survives there today has been deserted far longer than it was ever fully inhabited.

Of course, we have no idea when human occupation on Skellig first started.

The island’s earliest historical reference, a medieval text from around 700 AD, mentions local dynastic squabbling. A regional king is portrayed as having taken refuge on the island of Scellec (Old Irish sceillec—”a small piece of rock,” “a steep rock” or “crag”). Although there is no mention of ecclesiastical status at that time, its apparent suitability as a sanctuary for political exiles is something which reflects common practice on mainland church sites throughout the seventh century.

There is no written mention of monastic occupation of Skellig until 824 AD. In that year, a Viking raid on the island resulted in the “carrying off” of an individual named Étgal, presumably the abbot, or head of the community at the time, who died “of hunger and thirst,” presumably before his community could negotiate terms for ransom. Such an extortion attempt, paralleled elsewhere throughout Ireland, indicates that the religious community on Skellig was of sufficient status and renown to warrant inclusion in the medieval headlines of the day—something which points to a longstanding ecclesiastical occupation prior to the portrayed events. In addition, it also provides what is perhaps our earliest example of Skellig being utilized as a “Cash Cow”—viking eyes sizing up its premier ecclesiastical status and taking advantage of its potential “economic” returns.

Skellig and the obits of its abbots continued to be sporadically mentioned in ninth-century annals and martyrologies—and on into the 10th and 11th centuries, where we find the earliest mention of St. Michael. The appearance of the “Michael” association late in the historical record would seem to suggest an 11th-century reorganization and re-dedication, likely a result of new secular patronage. Around the same time, the rest of Ireland was seeing the emergence of a new interest in permanent expression within ecclesiastical landscapes. The building of bigger and more elaborate churches in stone was a new direction for an insular Church which had, for the most part, built their structures in wood up to that point.

Such a “re-boot” of Skellig Michael anticipated a wider national movement: the 12th-century reform of the Irish Church—a series of synods bringing its diverging episcopal organization and identity closer to more normative continental models. Throughout the period, new European orders, saints, and architectural styles flooded the country’s landscape. Sponsored by secular elites, they represented an archaeology of aggrandizement—of the past, for the present, with a cold, stony eye on a penitential future.

The monastic remains on Skellig are typical of the period. By the late 11th and 12th century, it was probably only an oasis of tranquil contemplation in its off season. During the summer months, regular pilgrim traffic would have been encouraged and facilitated. Imagine it as a mini-pilgrimage out to the ends of the Earth, a chance to experience the sublime for a short period, to sleep amongst the stones in the shadows of saints.

It is likely that regular ecclesiastical habitation of the island—if it ever was permanent—ceased around the same time. The establishment of a new Augustinian priory at nearby Ballinskelligs became the focal point for Skellig’s guardians and ecclesiastical authorities, part of a pattern of western island foundations and their offshoots mirrored all along the western Irish coast in the same period.

Perhaps the most pertinent contemporary witness to Skelligs enduring fame and ongoing “Disneyfication” occurs in Giraldus Cambrensis’s 12th-century account of Ireland—a popular work of literary embellishment that can best be described as a medieval version of a science fiction space opera. In it, Cambrensis refers to a hollow stone on a “certain island which has within it a church of Saint Michael” that dutifully produces Eucharist wine every day. One might argue that Skellig’s inclusion in a medieval blockbuster of its day makes it a fitting location for today’s Star Wars film.

Since then, Skellig Michael has never been short of attention or exotic visitors. Successive generations continue to carve its stones into their cultural and religious imaginations. But those stone remains, as they exist, are a product of its latter stages. Skellig Michael remains an archaeology of continual arrested development, cut off in its prime and accidentally enshrined by changing climates, ecclesiastical practices, and extreme isolation. An unearthly corner of planet earth, left behind on an island far, far away.

Which, of course, is what it was always supposed to be. 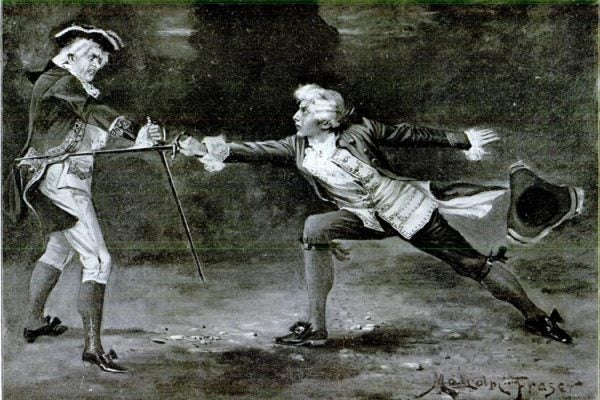 The Other Winston Churchill

Do you know about Winston Churchill, the American novelist? Now you do.