Happy 50th birthday to novelist, poet, and filmmaker Sherman Alexie. Learn about “one of the major lyric voices of our time” through his work. 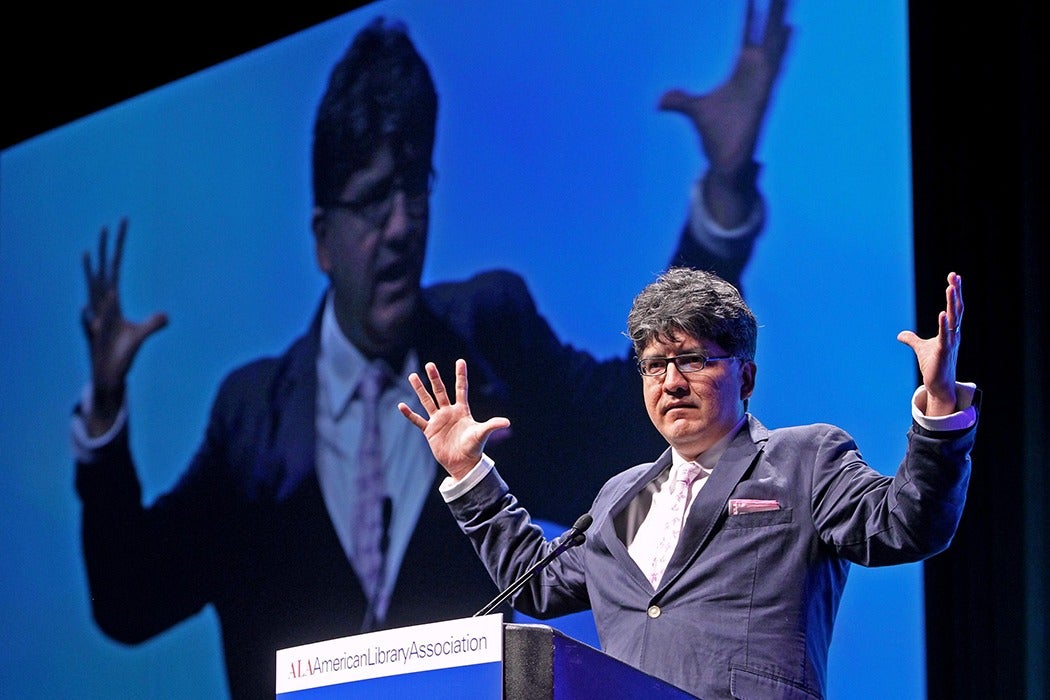 Writer, filmmaker, and poet Sherman Alexie turns 50 today. Alexie is known for his wide range of works, including the National Book Award winners The Absolutely True Diary of a Part-Time Indian and The Lone Ranger and Tonto Fistfight in Heaven. A Spokane/Coeur d’Alene Indian, Alexie often uses his work to address life on and off the reservation, usually deconstructing and playing with age-old stereotypes.

In a 1996 interview, Alexie discusses how his first book of poems was published when he was 24, and shares his surprise when he found out that the New York Times reviewed it, calling Alexie “one of the major lyric voices of our time.” He went on to sign a two-book deal, promising one book of short stories and a then-unwritten novel, which would turn out to be the massively popular Reservation Blues.

Read the work of “one of the major lyric voices of our time.”

In “Sherman Alexie’s Indigenous Blues,” Douglas Ford parses Alexie’s use of the blues, analyzing not only Alexie’s work, but also of the literary journey he embarks upon with his readers. In Ford’s words, Alexie “bridges two different American experiences, African and Indian, and, in so doing, also helps bridge discourses.” In turn, Alexie’s work functions at what Ford describes as “a series of crossroads” or a “ cultural intersection.”

Alexie blends cultures in ways that present a microcosm of our country’s cultural mashup. According to Ford:

Alexie’s novel inscribes a crossroads similar to those in the blues, a juncture where we can see an indigenous Native American oral tradition still at work, but now in hybrid form, informed by the other discursive forms that have crossed its path.

John Newton also observes the ways in which Alexie plays with and disrupts stereotypes. He argues that Alexie’s poems reclaim “the Native American’s own alienated image—the Indian viewed by the white Other in the deadlights’ (or the cinema’s) spectacularizing glare.” Alexie is singular in his reworkings of postcolonial and postmodern theory, both extremely popular theories when Alexie began writing.

Newton suggests that Sherman Alexie essentially holds a mirror to the ways in which the Native “Other” has been crafted, shaped, and recrafted by a white audience over time. Alexie’s

ethnographic rewrite is not preemptive…Nor, in any positivist sense, is it recuperative…Instead, the image is reclaimed by Alexie as image, thick with its history of use and abuse, the banality of trauma which are fused in its “heavy lightness,” and which prime it for redeployment in the long siege of postmodern decolonization.

What keeps Alexie writing these 25 years? How does he stay engaged in this ambitious project of rewriting the Native American story? Perhaps his own writing holds a clue. In 1992, the year Alexie’s first book of poetry came out, he published a short poem called “Going on the Wagon.”

“So many old Indians stopped drinking
one drink before
the drink which would’ve killed them.
I’ll write poetry exactly that way.”

The National Book Awards Shortlist has been announced and wouldn't you know, many of the authors honored have work in JSTOR.