September 1922: The Great Fire of Smyrna

A hundred years after the cosmopolitan city burnt to the ground, the truth about who started the fire and why remains a point of contention. 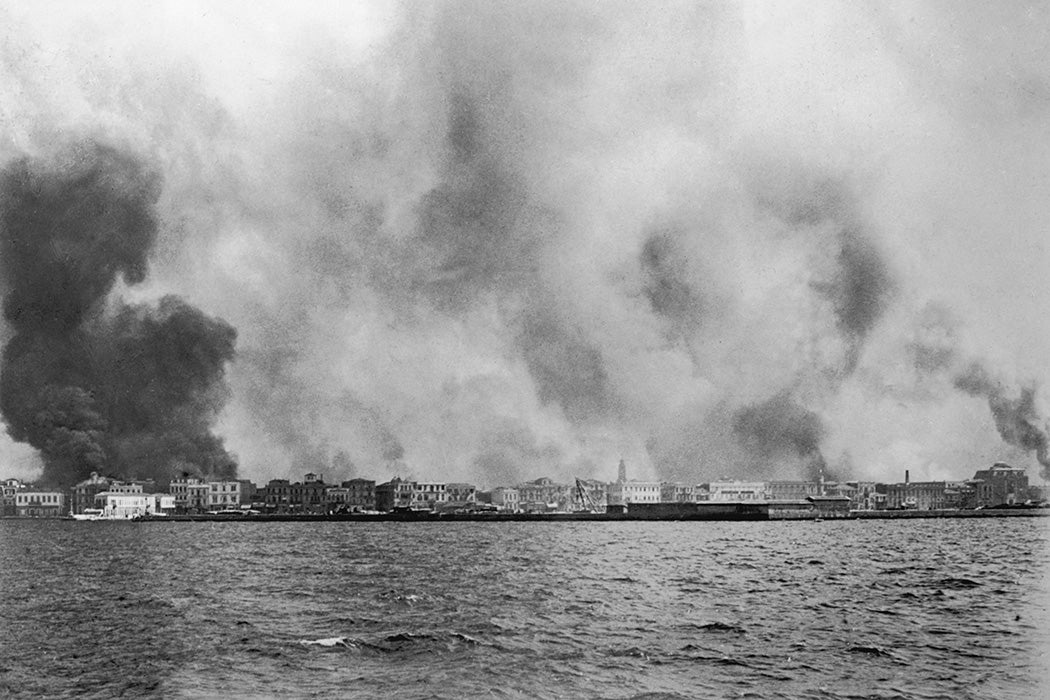 It was the middle of September 1922, and Smyrna was burning. During the waning days of the Ottoman Empire and at the tail end of the Greco-Turkish War (1919–1922) that followed World War I, the port city of Smyrna on the Aegean coast of Asia Minor was set alight by arsonists. In a matter of days, most of the city burned to the ground—only the Jewish and the Muslim quarters survived. In Smyrna’s place, where there had once been a truly cosmopolitan city with Jewish, Muslim, Greek, Armenian, French, and American quarters, rose the Turkish city of Izmir, explains Turkish historian Biray Kolluoḡlu Kırlı. These are undisputed facts. Beyond that, no one can agree exactly what happened that September as the Greek army withdrew from Asia Minor, pushed to the sea by the advancing revolutionary army of the Young Turks, who were keen to put an end to the Ottoman Empire and reclaim “Turkey for the Turks.”

Who started the fires—plural, for there were many fires that converged into one large one—that sent thousands of civilians scurrying to the narrow seaside quay? Why did they start them? Were they already burning as the Turkish army made its way into the city, lit by Greeks to destroy their own homes so the Turks couldn’t seize them? Or was it the “barbarian” Turks who flushed the Greeks from the city and wanted to ensure that they had no homes, no shops, no theater, no cafes to return to? It depends whom you ask.

Debates regarding the responsibility for the Izmir debacle hold a particularly sensitive place in the memory of the peoples of both Turkey and Greece. Turkish official history, propagated through high-school history textbooks and both television and radio programmes broadcast on the significant days of republican history, preaches that the city was burnt by the Greeks and Armenians in a final attempt to destroy what they were leaving behind. The Greek accounts place the responsibility on the “vicious” and “barbarian” Turks. All accounts find, or better yet, fabricate evidence to support their ardently-argued positions.

In a November 1922 issue of Current History, electrical engineer Abdullah F. Hamdi, a native of Constantinople who lived in New York at the time, stated, “The destruction of Smyrna by fire was the work of the Greeks,” whom, he reported, bragged about their plan to burn the entire country on their way out rather than leave it to the Turks. Hamid based his claims on Turkish translations of speeches and Vakit, a newspaper published in Constantinople.

Historian Peter Kincaid Jensen complicates things further by suggesting that the fire may have been an accident. “To this day, it has not been ascertained whether the fire was started by Turks, Greeks, Armenians, or by accident,” he claims, though that’s difficult to fathom, given Kırlı’s vivid account of the eleven separate fires reported that day. The Greek employees of the fire department, Kirli reminds us, had been dismissed, so there were “only thirty-seven fire fighters in the whole city,” with a series of small fires breaking out all over the city:

Towards noon on Wednesday 13 September at least six fires were reported simultaneously around the freight terminal warehouses and the passenger station of the Aydin Railroad. Around noon five more fires were reported around the Armenian hospital, two at the American club and several around the Kasaba railroad station. Additionally the wind started to blow from the south-east and drove the flames towards the Frank and Greek quarters. These disparate fires, originating in different spots in this part of the city, eventually turned into a single conflagration.

The fire forced Greek, Armenian, and other European residents out of the their homes and down the hill. They collected scores deep on a narrow quay, waiting by the sea for help from rescue boats that for some, never came. So goes the story of Smyrna from the Greek point of view.

An estimated 100,000 people died during what became known to the Greeks as the Catastrophe of Smyrna.

Indeed, chaos preceded the fire—thousands of refugees fleeing the Eastern front and the Turkish army had been turning up in Smyrna for weeks before the fire and the arrival of the Turkish army—and ensued throughout the days and weeks leading up to September 22, when the fire finally burned out. Kirli quotes “one of the observers on one of the British warships” in the harbor:

It was a terrifying thing to see even from the distance. There was the most awful scream one could ever imagine. I believe many people were shoved into the sea, simply by the crowds nearest the houses trying to get further away from the fire … Many did undoubtedly jump into the sea, from sheer panic.

Whatever the cause of the fire, an estimated 100,000 people died during what became known to the Greeks as the Catastrophe of Smyrna. Twenty-five thousand homes, shops, businesses, and government buildings were destroyed. This created a refugee crisis of epic proportions. Of the roughly 200,000 displaced people, more than 90 percent were Greek, according to Kirli. But there were others as well.

Drawing on the myth of the phoenix, Kırlı argues “the destruction of Ottoman spaces and the redefinition and reconstruction of new cityscapes and public spaces were an integral part of the process of the construction of Turkish nationalism in the 1920s.” Turkish silence around the fire—not a single Turkish movie or novel mentions it, few scholarly studies analyze it—was part of this process.

In most memoirs on the Turkish national war “Izmir’s liberation,” which holds an important place in popular consciousness and the historiography of the Turkish Revolution, is recounted in great detail. It was in Izmir that actual fighting came to an end and the victory of the nationalist resistance was crowned. Hence it is telling to see that while the entrance of the Turkish army into the city and the ensuing days are recounted in great detail, the fire itself is either passed over in one sentence or not mentioned at all.  Most Turkish academic accounts of the “war of liberation,” fully consonant with the official account, tell us how the Greeks (sometimes with the help of the Armenians) burned down a city which they did not want to leave behind.

Kirli speaks of this in terms of purification. “The old Izmir belonged to Levantines, Greeks, Armenians, Jews, and Muslims. For it to gain a Turkish identity it had to be purified. … By burning Izmir the nationalists were chastising infidel Izmir. Flames devoured the cosmopolitan, hence decadent, impure culture of the city. When the black clouds cleared, Izmir had undergone a moral improvement; it was purified.” 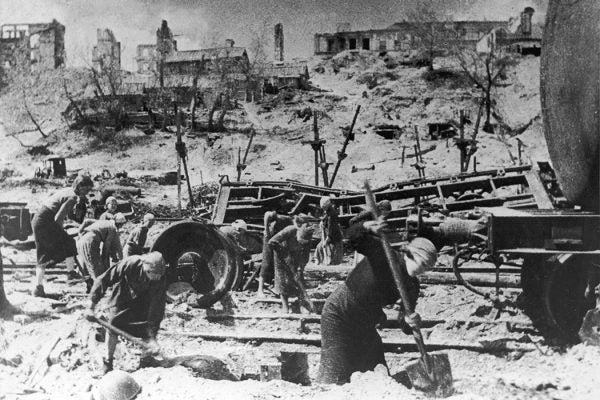