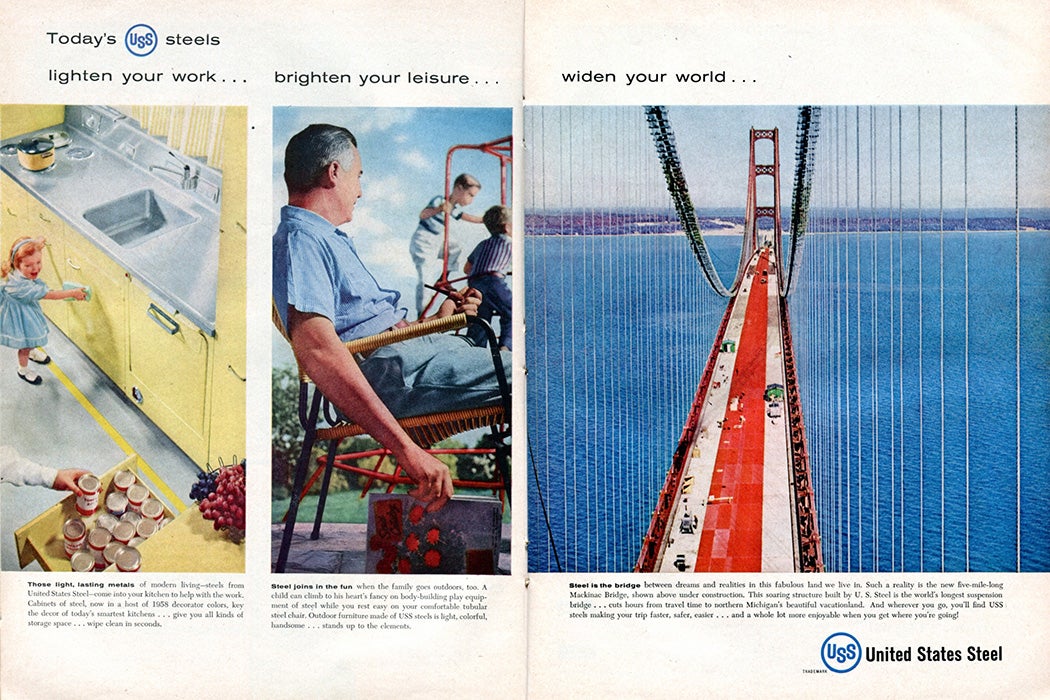 In 1945, the American iron and steel industry was a colossus. The nation’s workers produced 67% of the world’s pig iron and 72% of the world’s steel. Enormously boosted by government contracts during the war, “Big Steel” looked like it would dominate world steel production for the foreseeable future. Korea, Vietnam, the Cold War—all were good for business. Yet in 1959, steel imports surpassed exports for the first time.

As the Sixties dawned, the American steel industry was showing its age. Cheaper imports and labor unrest were definitely issues, but so too was steel’s reputation. Aluminum and plastics were the hot and trendy modern materials. Steel was old-fashioned: heavy, dirty, prone to rust. It was necessary, but it sure wasn’t cool.

Grand juries and congressional investigations put the steel bosses in a bad light.

Steel didn’t smack of the Space Age. It didn’t help that the man who promised to put men on the Moon, President John F. Kennedy, had reacted vigorously to the industry’s reneging on a labor agreement his administration had helped settle. Grand juries and congressional investigations put the steel bosses in a bad light.

The industry needed some public relations help. Scholar Nicolas P. Maffei calls Big Steel’s turn to market research an “unusually progressive step” for a generally complacent industry. The dominant producer, US Steel, and the American Iron and Steel Institute, the industry trade group, looked to branding consultants to put some zing into the old metal.

The result was the “Gleam of Steel” marketing campaign.  The industry plunged into  “vigorously and aggressively promoting the steel sector as forward-looking, and steel as a bright, light and modern material.”

“The gleam in her eye says it’s stainless steel!” ran one print campaign. With the new Steelmark emblem, which suggested a “glinting twinkle of reflected light” and the brilliance of “stainless steel,” the push towards associating “shininess with informal, fashionable living” was on.

Maffei writes that the business press of the day made much of the competition in the “battle of materials.” But actually, domestic products like cookwares were usually mixtures of materials. Copper, brass, stainless steel, aluminum, and plastics like Teflon—discovered in 1938 and made commercially available in “non-stick” cookware in 1961—were all used by the same manufacturers.

There were also many types of stainless steel. Rust-free alloys were first introduced in the 1930s, and initially used as ornamental flourishes in architecture, trains, and automobiles. They were made of iron mixed with of varying amounts of nickel (for toughness and high fatigue strength), chromium (for resistance to corrosion or rust), and manganese (for surface quality).  And boy, did it gleam! As Miss Stainless Steel herself put it in promotional tours, it was the “modern metal for today’s modern designs.”

Part of the rebranding of steel as the latest shiny thing included a new logo for US Steel. The san serif letters USS inside a circle became iconic in the design world, but actually worried some within the company. It looked like “steel” was being taken out of the equation. That foreshadowed another rebranding in 1986, when the company changed its name to the USX Corporation.

For all the de-industrialization the U.S. has gone through, the country is still the fourth-largest producer of steel in the world. As it happens, in 2001, USX shed its non-steel components and returned to being called US Steel again.  And stainless steel still sells.