The Sad Story of Booming Ben, Last of the Heath Hens

Grassland-dwelling heath hen and prairie chicken populations across the country are in trouble. Loss of habitat continues to threaten their numbers. 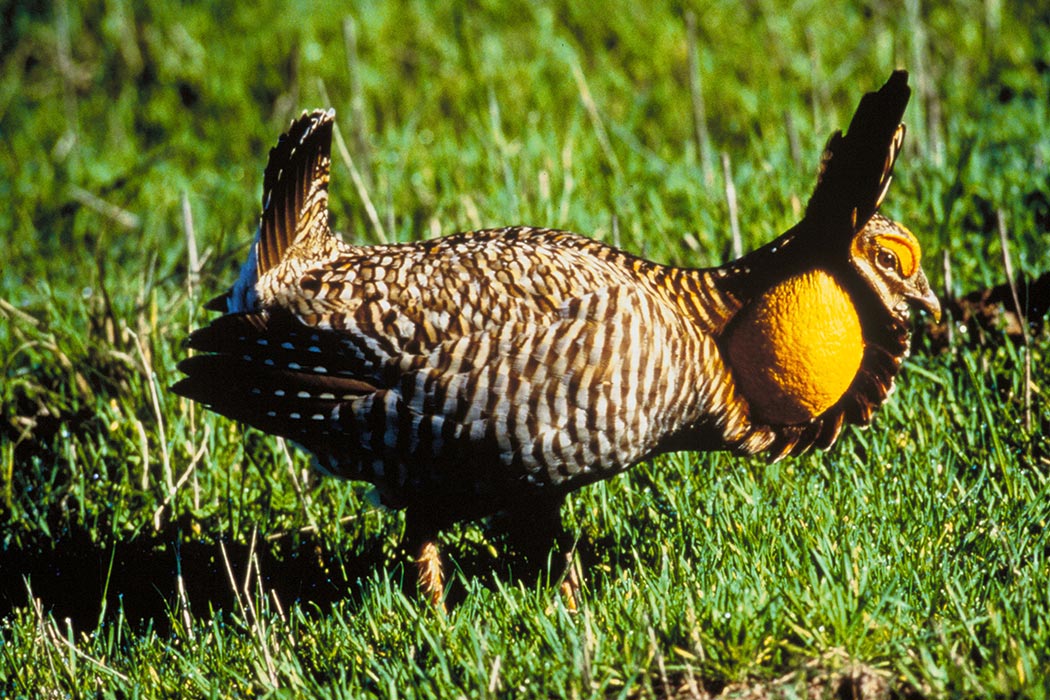 Grassland-dwelling grouse and prairie chicken populations across the country are in trouble. Last September, a federal judge in Texas stripped the lesser prairie chicken of its protection under the Endangered Species Act. A few weeks later, the U.S. Fish & Wildlife Service declined to list the greater sage grouse as endangered, determining that conservation efforts already underway were sufficient. And at the beginning of 2016, a group of armed extremists took over Malheur National Wildlife Refuge in Oregon, where the sage grouse was among the vulnerable species refuge managers were helping to protect.

The struggles of these birds come down to one thing: habitat. Over the course of the last several centuries, North America’s prairies have been converted to agriculture, degraded by cattle grazing, filled in by shrubs and trees, and reduced from unbroken seas of grass to tiny, isolated fragments.

By 1870, heath hens had completely vanished from the mainland U.S. and remained only on Martha’s Vineyard.

This is not a new story. One of the first major efforts to save an endangered species concerned an almost-forgotten grouse known as the heath hen, a unique eastern subspecies of the greater prairie chicken that quietly blinked out of existence in the early 1930s despite decades of unprecedented effort to save it.

During colonial times, the heath hen ranged through scrubby coastal habitats from Maine to the Carolinas. However, European settlers brought increased hunting pressure and suppressed the fires that had kept coastal headlands free of large vegetation for thousands of years, altering the birds’ preferred habitat. By 1870, heath hens had completely vanished from the mainland and remained only on Martha’s Vineyard, a tiny island off the coast of Cape Cod.

Officials on Martha’s Vineyard banned hunting and established a preserve to protect the remaining birds’ habitat on the island. At first things appeared to be looking up—the population increased from less than 100 to around 2,000 by 1916. However, the heath hens’ good fortune wouldn’t last.

In May, 1916, a devastating wildfire swept through the heath hen breeding grounds. The following year the annual census turned up only 150 birds, and through pure bad luck most of the survivors were males, leaving the population dangerously imbalanced. Inbreeding and diseases carried by domestic poultry took a toll over the next decade, and in 1927 only 13 birds remained… then two in 1928… And then, in the spring of 1929, only a single survivor returned to the blind that biologists had set up at the remaining heath hens’ mating ground at a local farm.

Islanders nicknamed the remaining heath hen “Booming Ben,” after the noise grouse make during their elaborate mating display. With no females left to impress and no other males to compete against, however, Ben remained silent. “The bird presented a pathetic figure as it stood out there all alone,” wrote Bowdoin College professor Alfred O. Gross at the time, “without any companions save the crows that had come to share the food intended for the heath hen.”

Gross and his colleagues trapped Ben and fitted him with identifying metal leg bands, hoping that they’d be able to recognize his remains if a hawk or other predator captured and ate him. Eventually he disappeared for good after a last sighting in March 1932.

Booming Ben’s death marked the first time biologists had been able to watch firsthand as a species (or, technically, in this case, a subspecies) went extinct. The heath hen’s demise came in spite of years of effort to save it—reintroducing birds into areas of their former range failed, attempts to breed them in captivity failed, introducing the Western subspecies of greater prairie chicken (its closest relative) in the east failed. Even if conservationists had found Ben a mate, it would probably have been too late: Examinations of several of the other last remaining male birds revealed that their reproductive organs had degenerated, probably due to inbreeding.

Even though it’s been gone for nearly a century, the heath hen’s long, sad slide toward oblivion has lessons for the ecologists and land managers working to preserve its living relatives today. Although a number of grouse species are threatened or endangered, the closest modern parallel to the heath hen is undoubtedly the Attwater’s prairie chicken.

At one time, a million Attwater’s prairie chickens occupied the open coastal grasslands of Texas and Louisiana. Over time, though, vast areas of their habitat were converted to cropland, crowded with invasive species, and choked by the growth of shrubs that resulted from fire suppression. By the early 20th century, they were in a steep decline. In 1967, Attwater’s prairie chicken was placed on the endangered species list, but a series of droughts and floods caused its population to continue to drop. By 1994, only 160 wild birds remained, and today that number is around 100.

To avoid the problems that come from inbreeding, managers carefully track the family trees of the captive birds, pairing them in ways that maximize diversity. A new record was set last summer when 500 captive-bred birds were released into the wild, though survival is so low that fewer than 20 percent are expected to survive to this spring.

* * *
Sometimes wildlife managers have to double as detectives. For years, Rossignol and his colleagues wondered why they kept finding young chicks starving to death in their nests. When refuge staff collected small insects and fed the chicks themselves, they survived, but the overall numbers of those tiny insects present in the habitat seemed to be unusually low.

Finally they identified the culprit: invasive fire ants that arrived in the area in the 1970s. Voracious predators, fire ants were eating so many of the ecosystem’s small insects that prairie chicken parents couldn’t find enough food to feed their chicks. Occasionally fire ants even swarmed and consumed the newly hatched chicks themselves. This was a breakthrough, and land managers are now treating prairie chicken habitats with targeted insecticide baits to reduce the fire ant population.

Rossignol says that recent years have also seen more unpredictable weather on the refuge, which he attributes to climate change. “For two or three years, we’ve been able to get chicks to survive past this critical two-week period, only to get these gully washers, ten inches of rain in a 24-hour period, and at the age the chicks can’t thermoregulate yet,” he says. “They get chilled from the rain and die of exposure.”

Still, Rossignol is hopeful when asked if he thinks Attwater’s prairie chickens will go the way of the heath hen. “If you had asked me this question about five years ago, I would probably have had a much more dismal response to give you. But finding out about the fire ants and being able to manage them gives us a lot of hope that we can bring this species back, and it’s getting to the point where they are increasing in numbers,” he says.

“Unfortunately it just takes a long time to recover a species after its numbers get down this low,” he continues. “A lot of people seem to think, You’ve been at it for five years—what’s the problem? You better hurry up! It doesn’t work that way, unfortunately. It can be frustrating, and it’s going to take time, but in the last few years we have been seeing some improvements. We’ll probably have setbacks along the way, but by persevering and continuing what we’re doing, eventually we’ll get to the point where they can start doing it on their own, which is the goal.”

* * *
“The last bird on Martha’s Vineyard has fired our imagination and has served to focus public attention on the necessity of taking immediate positive steps for the conservation of our wildlife,” wrote Alfred Gross in 1931. “If this bird serves as a warning of what may happen to other game birds, the thousands of dollars expended by the State and various organizations and individuals will not have been spent in vain.”

The Attwater’s prairie chicken, the lesser prairie chicken, the sage grouse, and all the others will continue to enliven the North American landscape, with their elaborate mating calls and dances every spring, for decades to come—if we can remember the lessons learned from lonely Booming Ben, who disappeared into the shrubby farmland of Martha’s Vineyard for the last time more than 80 years ago. 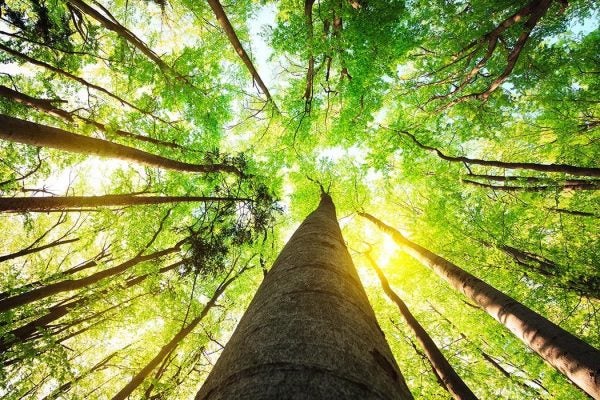 The Secret Lives of Trees

Trees in the forest communicate with each other through underground networks shaped and assisted by ectomycorrhizal fungi.