P.T. Barnum’s career as a Kentucky show man, began with his ownership and exploitation of African American slave Joice Heth. 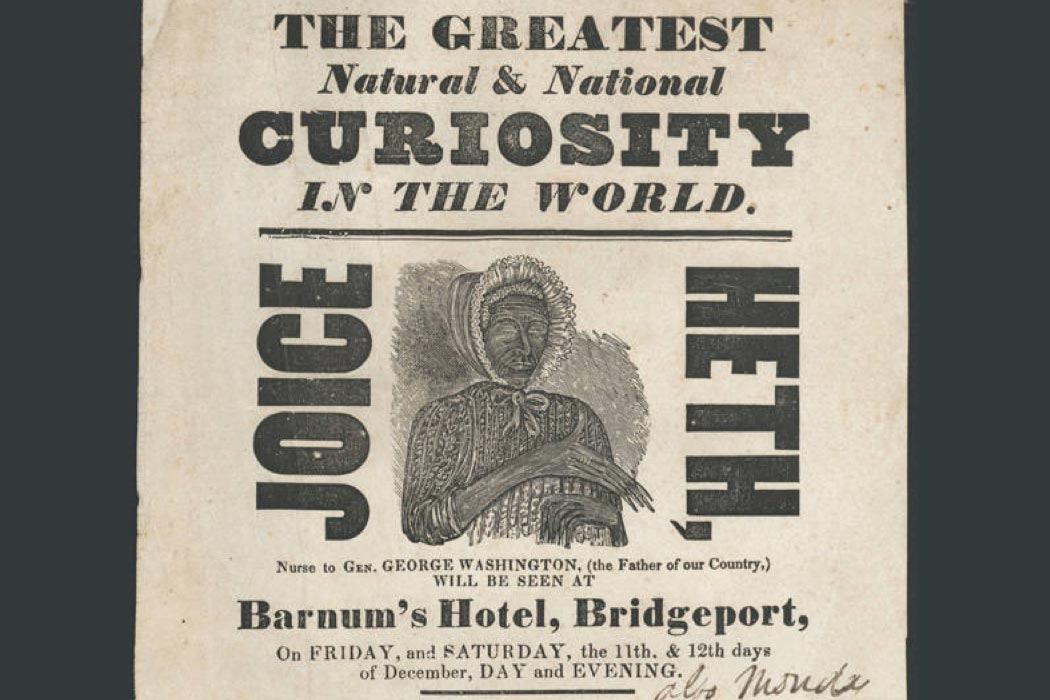 American popular culture began with the autopsy of a former slave—that, at least, is the contention of Emory professor Benjamin Reiss’s 1999 article on Joice Heth.

On February 25, 1836, Heth’s corpse was cut open in New York’s City Saloon, in front of 1,500 paying spectators. The doctor, David L. Rogers, came to some interesting conclusions. Heth was not, as P. T. Barnum had claimed, 161 years old. That, in turn, cast doubt on her alleged connection to George Washington, whom she supposedly nursed when he was a child.

Heth and Barnum’s paths first crossed in 1835, when one R. W. Lindsay, whom Reiss describes as “a hapless showman from Kentucky,” owned her. In Barnum’s first autobiography, published in 1855, he recounted receiving a tip about Heth from a friend and subsequently went down to Philadelphia to see her for himself.

She was, according to his account, unable to move from the lounge chair in which Lindsay had placed her. She was “totally blind, and her eyes were so deeply sunken in their sockets that the eyeballs seemed to have disappeared altogether. She had no teeth, but she possessed a head of thick, bushy gray hair. The fingers of her left hand were drawn down so as nearly to close it and remained fixed and immovable.” Despite her appearance, she was friendly and talkative. She “related many interesting anecdotes of ‘her dear little George.’” Lindsay supposedly provided Barnum with proof of her extremely advanced age, in the form of a convincing bill of sale that connected her to Washington’s family.

Barnum wrote that Lindsay’s offer gave him the chance to “become her owner” for $1,000. Barnum claimed to have had only half that sum to his name, but his business partner lent him the other $500, upon which Lindsay drew up a new bill of sale, reprinted in Barnum’s 1855 autobiography. Whether Barnum considered himself a slave-owner is left unaddressed in his memoirs.

The details of Heth’s supposed relationship to George Washington were at best unclear—some sources claimed he had suckled at her breast, though she denied ever serving as his wet nurse.

Having purchased Heth, Barnum approached William Niblo, the proprietor of Niblo’s Garden, one of the more popular entertainment venues in New York City. Not long before, a desperate Barnum had unsuccessfully applied for a job as a bartender there. Now he was returning as the manager of Niblo’s next act, and it would be a very successful act indeed.

For the next seven months, Barnum took Heth on a whirlwind tour of the northeastern United States, playing to eager crowds “in taverns, inns, museums, railway houses, and concert halls,” according to Reiss. The act generally began with a recounting of her backstory, including a reading of the bill of sale that Lindsay had shown as proof of her age. A question-and-answer session would follow, including questions from Barnum and the audience. Heth would often discuss religion and sing a few hymns, which many in the audience found quite moving.

However, when receipts started to fall off a bit, an anonymous piece appeared in one of Boston’s local newspapers, alleging that Heth was not only “a humbug,” but in fact an “automaton,” not even an actual human being. The crowds came flocking back to see the allegation refuted.

The main selling point was Heth’s connection to George Washington. The first half of the 19th century saw the acceleration and culmination of a process by which the “Father of His Country” was virtually deified—the greatest American of all time. Reiss notes that Americans produced more than 400 books, essays, and other writings about Washington between 1800 and 1860. Many of those—such as Mason Weems’s famous 1809 account of how Washington had chopped down a cherry tree and then refused to lie about it—were more than a little embellished, but they entered the national consciousness nonetheless. Indeed, Heth’s performance apparently included a reminiscence about the famous cherry-tree episode.

The details of Heth’s supposed relationship to Washington were at best unclear—some sources claimed he had suckled at her breast, though she denied ever serving as his wet nurse—but that hardly mattered to the people who came to see her. For them, she took on an almost religious significance: They would come to touch her aged body, despite her decrepit appearance.

It was all a fraud, of course. It was also, as Reiss points out, a flashpoint for the political, social, and racial conflicts bubbling up in the young Republic. Opinions on Barnum’s Heth exhibit tended to divide along the emerging fault line between Jacksonian Democrats and newly founded Whigs. Broadly speaking, the former claimed to represent the lower and middle classes—though only their white members—while the latter identified with more established commercial and elite interests.

Bizarre and unbelievable stories such as Heth’s sold newspapers. For example, the New York Sun, a penny paper, became notorious for perpetrating a hoax in which it claimed that an astronomer had discovered winged bat-men living on the moon. The inevitable unmasking of this fraud ruined what little credibility the paper had, but it hardly mattered, since, as author Paul Maliszewski notes, the Sun was by then selling more copies than all the city’s six-cent newspapers combined.

Penny papers gave Barnum the means to reach a much wider audience. Itinerant freak shows like his weren’t an especially novel phenomenon in the 1830s, but the media frenzy that Barnum managed to whip up was something different. Even when editors called him a fraud, he used the negative publicity to serve his purposes. For instance, in the wake of the Heth autopsy, he and his lawyer, Levi Lyman, paid a visit to James Gordon Bennett, the editor of the New York Herald, telling him that Heth was actually alive and well, and that the corpse cut open by Dr. Rogers was an entirely different person’s.

The fact that Barnum had purchased one human being from another became a source of embarrassment to him later in life, when he emerged as a staunch abolitionist.

It’s not wholly clear why Bennett bought this story (while maintaining his skepticism about Barnum’s original claim), but he did, and Lyman took the joke even further a few months later, when he told the story of the “Joice Heth Hoax” in serialized form in the Herald. Of course, the story of the hoax was itself a hoax, but it took Bennett an oddly long time to catch on.

Barnum’s high jinks with the penny press might have been humorous, but we shouldn’t lose sight of the fact that they were enabled by his ownership and exploitation of an African-American woman.

The fact that he had purchased one human being from another became a source of embarrassment to him later in life, when he emerged as a staunch abolitionist and supporter of the Fourteenth Amendment. Following the publication of his autobiography in 1855, Barnum kept releasing updated versions of his second memoir, Struggles and Triumphs. His tone in discussing the Heth episode is noticeably less self-congratulatory than in the first version. “The least deserving of all my efforts in the show line was the one which introduced me to the business,” he admits in the first edition of Struggles, published in 1869. It was, he claimed, “a scheme in no sense of my own devising; one which had been sometime before the public and which had so many vouchers for its genuineness that at the time of taking possession of it I honestly believed it to be genuine; something, too, which, as I have said, I did not seek, but which by accident came in my way and seemed almost to compel my agency.” Barnum mostly glosses over the tour with Heth, ending with a quick mention of the autopsy and shrugging it off by saying that “this ‘dark subject’ will probably always continue to be shrouded in mystery.” At no point does he attempt to deny—or express any misgivings about—having purchased Heth as a slave.

The story of Heth and Barnum also points to another, darker aspect of American popular culture.

Whatever Barnum might have felt about his connection with Heth when he reached old age, his brief association with her was undeniably the turning point of his career. He had already brought additional performers under his management before she died, and in 1841 he would open his American Museum, a monument to middle-class entertainment that combined a theater, waxworks, “freaks,” and natural history displays, among other curiosities. He became an impresario for acts as diverse as the opera singer Jenny Lind and the dwarf Charles Stratton, who he presented as “General Tom Thumb.” All these successes stemmed from the important lesson he’d learned in 1835: “At the outset of my career I saw that everything depended upon getting people to think, and talk, and become curious and excited over and about the ‘rare spectacle.’” The resultant media savvy he displayed was a major influence on the mass culture we’re familiar with today.

But the story of Heth and Barnum also points to another, darker aspect of American popular culture. In this case as in the rise of phenomena like the minstrel show, there is an uncomfortable echo of the country’s ongoing reckoning with the role of race in determining who is and is not an American. Barnum went on to show-biz greatness, while Heth suffered one last indignity in death. 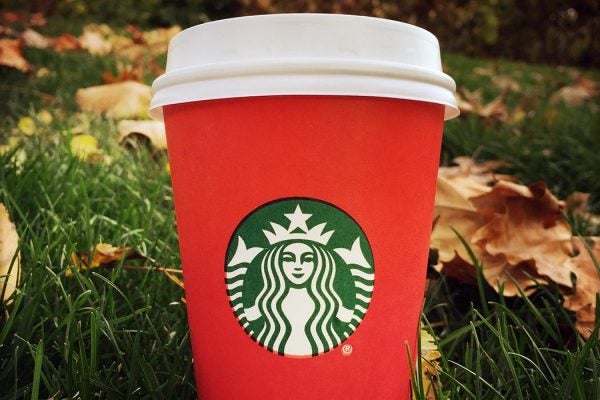 The controversy over Jesus' birthday has gone on for centuries.