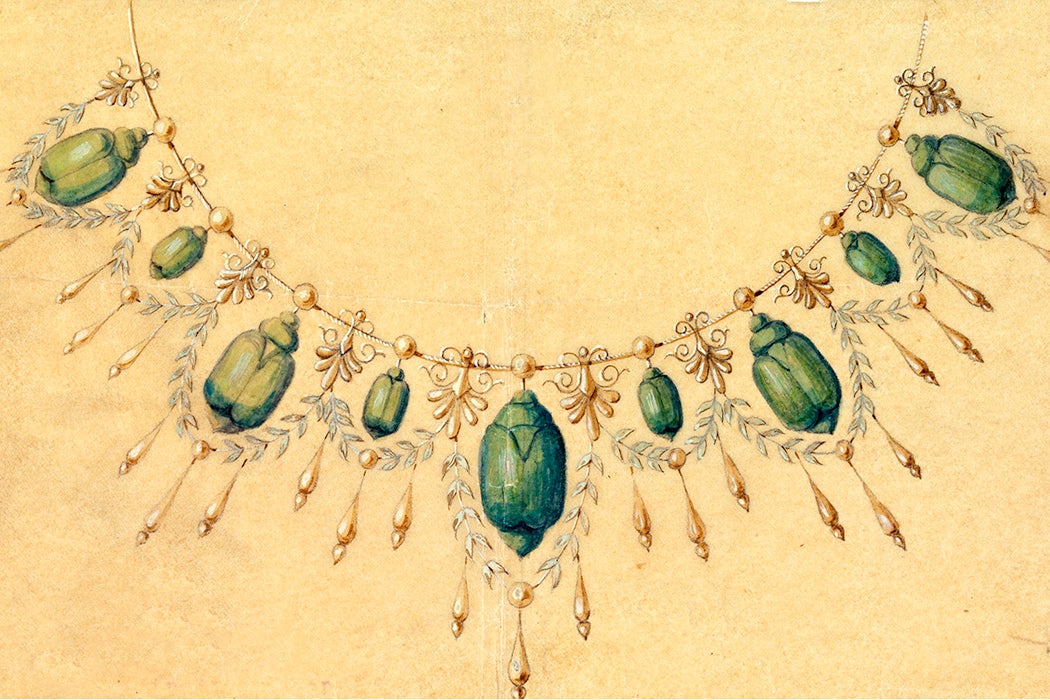 A design for a necklace with Brazilian Beetles, ca. 1900
via Wikimedia Commons
By: Amelia Soth
4 minutes
Share Tweet Email Print

In 1891, a Mrs. DeJones debuted a fabulous piece of living jewelry. She strapped a diamond to the back of a live beetle and trained it to fly around her neck, tracing the shape of a necklace. At least, that was the story in Entomological News. This tidbit, snipped from some anonymous daily newspaper, might be best taken with a grain of salt.

Even if it wasn’t true, it was certainly on trend. In 1863, Godey’s Lady’s Book reported that “[t]he ornithological and entomological fevers, which broke out last spring, will continue with increased violence throughout the winter.” The fever was still raging twenty-eight years later, when Mrs. DeJones (supposedly) let loose her flying necklace. Exoskeletons were in. Fashion-forward ladies were expected to invest in beetle-wing embroidery and insect carapaces strung together like beads.

They dotted their hairdos with flickering fireflies or let live beetles, leashed to pins, roam over their bodices.

Some particularly trendy ladies took it a step further. They dotted their hairdos with flickering fireflies or let live beetles, leashed to pins, roam over their bodices. “Truly a fashionable toilet is becoming a composite thing, with dead birds and butterflies… and Mexican bugs as jewelry, held by golden chains,” Entomological News opined.

The wing-cases of gold-enameled weevils hung from necklaces; muslin gowns were embroidered with the iridescent green elytra of jewel beetles. Tiny golden scarabs were glued to the petals of artificial flowers. Delicate moths were perched on hairpins, to float above curls. Even faux insects—made of gold and silver, rather than chitin—were often set en tremblant, with springs under their wings, so that they seemed to quiver with life.

The fashion was the reflection of an ongoing Victorian obsession with natural history. As urban Victorians grew more and more detached from nature, they tried to reconstruct the wilderness in their homes: cultivating ferns under crystal domes, raising frogs in glass vivaria, and trimming their hats with piles of moss and bird’s nests. Taxidermy was considered a delightful domestic hobby. Victorian ladies learned to gut dead animals, douse their corpses with arsenic, and arrange them in lifelike poses for the amusement of visitors. In his 1884 guide Practical Taxidermy, Montagu Browne writes:

Society demands that objects of natural history should not be all relegated to the forgotten shelves of dusty museums, but live as “things of beauty and joys forever.” Hence the new alliance between the goldsmith and the taxidermist, resulting in a thousand ingenious combinations of nature and art.

The reader is encouraged to deck themselves out in natural spoils: brooches made of hummingbird heads, beetles hanging from each ear, owl’s claws, tipped with silver, serving as coat-clasps. Of course, the fad had its detractors. The satirical magazine Punch caricatured the fashionable lady as an insectoid monstrosity, mutating into a wasp or beetle to match the fashions she wore, and Art Amateur quotes one writer imagining with horror a world in which “[w]asps, hornets, caterpillars and cockroaches will all be allowed to nestle soon near the damask cheek of our fashionable beauties… the fashionable hat of the coming period will have for its chief ornament a lobster looking round the brim, or a mackerel sitting on its tail.”

The fashion for animal jewelry connected Victorians to the natural world, but also to the furthest reaches of the British Empire. Like sugar, ivory, and chocolate, iridescent beetles were among the spoils of empire. The demand for insect jewelry quickly pushed the most beautiful species to the brink of extinction, and the industry was built on the backs of enslaved laborers.

One Englishwoman visiting Brazil noted with amazement that the air was full of flying creatures that she had previously only seen on earrings and brooches, as if the whole contents of a fashionable lady’s closet had suddenly taken flight. What could be a better representation of the colonial mindset than that vision of a vibrant ecosystem as nothing but a glittering jewelry-box, waiting to be ransacked? 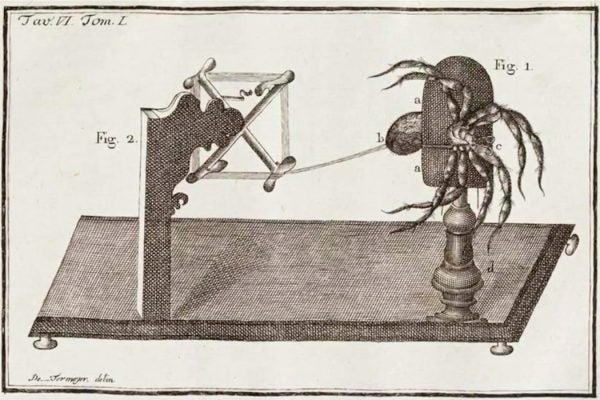