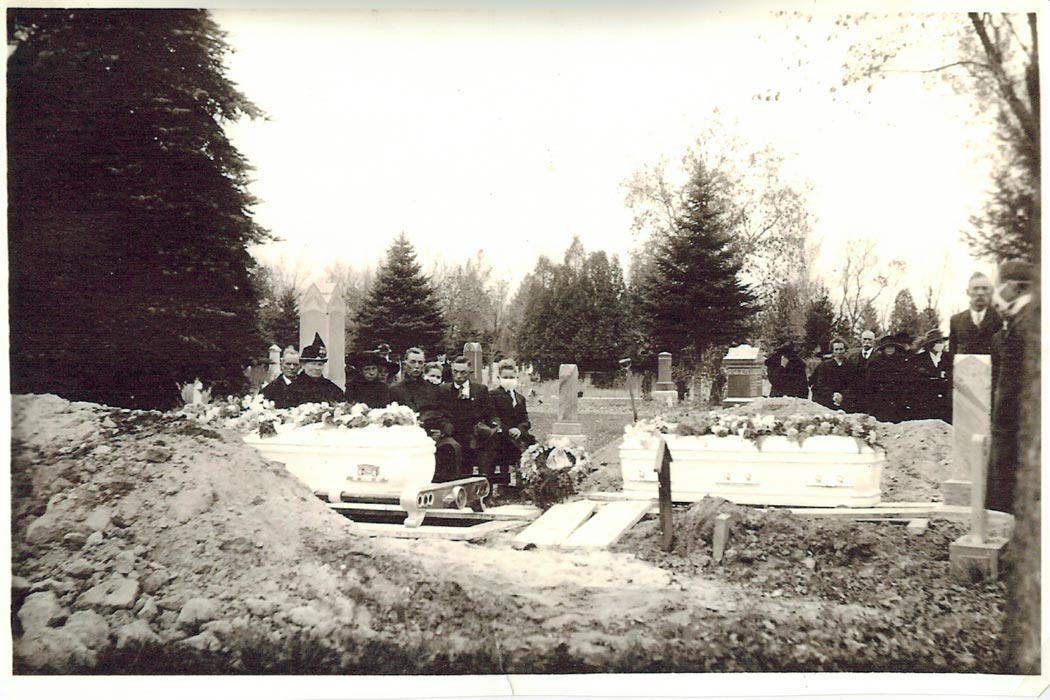 A few years ago I came across a family photograph of the burial ceremony of my second great-grandmother, Rachel (Broadhead) Taylor and her daughter, Flora Taylor. Both had died within three days of one another and were buried October 28, 1918. Rachel died at the age of 55, leaving behind her husband and several children, the youngest being just 13 years old. Her daughter Flora, not yet married, was only 26 years old. The photograph was a haunting reminder of the conditions of their deaths. The mourners, particularly the children, shrouded their faces in masks, fearful of falling victim to the same disease that claimed Rachel and her daughter—influenza. Local newspapers revealed their hometown had many stricken with the disease, part of what was to be known as the Influenza Epidemic of 1918, a global catastrophe that is estimated to have killed between 40 and 50 million people.

So many of our relatives share a piece of this epidemic’s horrific narrative. It left few households untouched and was particularly vengeful towards young adults. In a study of the virus’s origins published in the Proceedings of the American Philosophical Society, Jeffrey K. Taubenberger specifically identifies the high mortality rates among young adults, noting that in 1918 death rates for those between the ages of 15 and 34 were twenty times higher than the previous year. Tracing the descent of the virus itself, Taubenberger finds the virus is an ancestor of the modern H1N1 virus, which struck fear into so many around the globe in recent years.

The exact origin of the Influenza Epidemic of 1918 remains a matter of debate, discussion, and inquiry. Many scholars believe it originated in China, while others, such as J.S. Oxford believes the origins can be traced to a British Army Camp near Etaples, France in 1916. As the Transactions of the Institute of British Geographers points out, outbreaks were clearly seen in military training camps of the United States in March 1918 and spread throughout the Western Front the following month.

Scientists, medical scholars, and others have studied the epidemic’s effects on populations throughout the world. Attempting to answer the question of why some groups survived, while others seem to be more likely to fall victim to the disease. Many note the epidemic was “class neutral,” and studies have found that relationships between mortality rates and occupation/overcrowding simply cannot be found. Svenn-Erik Mamelund intricately examines the epidemic’s mortality rate among the Sami people of Norway, noting that the group’s lack of inherited immunity against influenza might be to blame for their high mortality rates when compared to other Norwegians between 1918 and 1919. The epidemic’s path through an area has also been the subject of in-depth study demonstrated by the Institute of British Geographers who looked at the spatial anatomy of the epidemic through London and the county boroughs of England and Wales.

The responses of local relief organizations are another fascinating element of the epidemic that deserves note. Moser Jones in the Association of Schools and Public Health’s Public Health Reports showcases the local efforts of the American Red Cross in four cities during the outbreak. Having recently been reorganized by President Wilson’s War Council, the American Red Cross had more than 14 regional divisions, 12,700 staff, and more than 20 million members by 1918. The shift of the American Red Cross’s efforts from supporting the war to combating the epidemic is startling. For example, in Boston the local chapter had been making surgical dressings for servicemen but quickly started making gauze masks for those caring for influenza patients instead. Jones teaches us that 537 volunteers worked 17 days in a row, making 83,606 masks. I have often wondered if the masks pictured at the burial services of my second great grandmother were made by a local chapter of the American Red Cross.

The Influenza Epidemic of 1918 killed more people than the First World War. Its victims were not necessarily poor or rich, they were often young adults, and in some cases those who lacked natural immunities to the disease. It devastated families across the world, many in the midst of the negative effects of the war. It took a personal toll on so many, including my own family. The picture from Rachel and Flora’s funeral will undoubtedly remain a subject of my own personal fascination, but passed along within its larger, more significant context to others – the stories behind the masks.

The Origin and Virulence of the 1918 "Spanish" Influenza Virus
By: Jeffery K. Taubenberger
Proceedings of the American Philosophical Society, Vol. 150, No. 1 (Mar., 2006), pp. 86- 112
American Philosophical Society
The So-Called Great Spanish Influenza Pandemic of 1918 May Have Originated in France in 1916
By: S. Oxford
Philosophical Transactions: Biological Sciences, Vol. 356, No. 1416, The Origin and Control of Pandemic Influenza (Dec. 29, 2001), pp. 1857-1859
The Royal Society
Spanish Influenza Mortality of Ethnic Minorities in Norway 1918-1919
By: Svenn-Erik Mamelund
European Journal of Population / Revue Européenne de Démographie, Vol. 19, No. 1 ( 2003), pp. 83-102
Springer
The Spatial Anatomy of an Epidemic: Influenza in London and the County Boroughs of England and Wales, 1918-1919
By: Matthew Smallman-Raynor, Niall Johnson and Andrew D. Cliff
Transactions of the Institute of British Geographers, Vol. 27, No. 4 (2002), pp. 452-470
Wiley on behalf of The Royal Geographical Society (with the Institute of British Geographers)
The American Red Cross and Local Response to the 1918 Influenza Pandemic: A Four-City Case Study
By: Marian Moser Jones
Public Health Reports (1974-), Vol. 125, Supplement 3: The 1918-1919 Influenza Pandemic in the United States (APRIL 2010), pp. 92-104
Association of Schools of Public Health 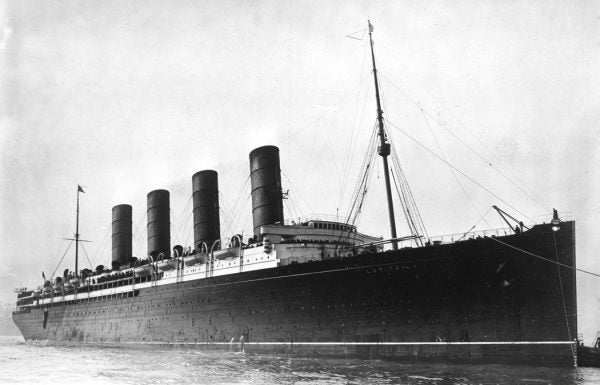 How the Lusitania Effect impacted German-American relations in pre-World War I German.