How the Paris Catacombs Solved a Cemetery Crisis

One of the most popular tourist destinations in Paris—the Catacombs—was started as a solution to the intrusion of death upon daily life. 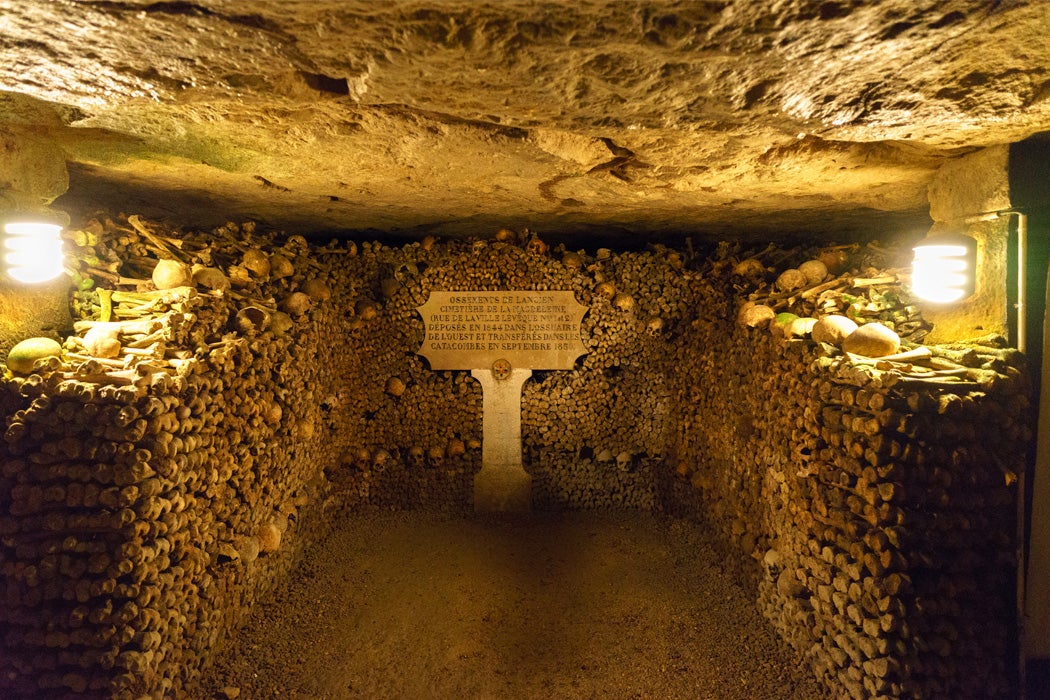 Recently the Guardian reported on a British health expert’s proposal to bury bodies alongside roads. The idea of lining thoroughfares with corpses may seem macabre, but it could promote the planting of new woodlands through green burial and help address the nation’s scarcity of cemetery space.

This is not the first time the living have had to tackle the problem of a growing population of the dead; a similar crisis sparked the rural cemetery movement of the nineteenth century.

Urban cemeteries in Paris were unpleasant places in the eighteenth century, particularly the Cemetery of the Innocents. For centuries, departed Parisians had been buried there in Les Halles, a busy, central neighborhood with an active market.

“The cemetery of the Holy Innocents in Paris was the oldest burial ground in the city, in continuous use since at least 1186,” writes biochemist Theodore Sourkes in the Journal of the History of Medicine and Allied Sciences. “In that year King Philippe II Auguste had the cemetery enclosed by a wall, three meters high, to give proper respect to the dead, to limit its use as a commons, and to separate it from market activities.”

As the city became increasingly crowded around the cemetery, that separation blurred, and the mixing could be odious. Historian Rosemary Wakeman describes the noxious scene in French Politics, Culture & Society:

Buying and selling spilled into the adjoining Cemetery of the Innocents, where illicit trade and general debauchery formed a danse macabre among the tombs and decaying detritus that boiled up from the fetid soil and communal graves. The vast necropolis of Saints-Innocents welcomed the dead from every parish in the city. Human decomposition mixed with the blood and guts of the market, with piles of rubbish to form a putrid stench, a dangerous effluence that made Les Halles an axis of infection and disease.

Health concerns arose over the proximity of people to the festering cemetery as many believed in a link between miasmas, or “bad air,” and disease. Historian Mark Jenner explains the connection in The English Historical Review:

Using machines for gaseous collection and analysis worthy of the Addams family, late eighteenth-century doctors and sanitarians demonstrated the dangers presented by the mephitic exhalations of burial vaults and graveyards…In France they publicised tragedies like the death of three gravediggers in a Montpellier church vault in 1744; after an inquiry into health hazards the Parlement of Paris restricted interments in churches and intra-urban cemeteries in 1765; a decade later a royal declaration commanded that all cemeteries in built-up areas be moved “insofar as circumstances permit”, and severely limited who could be buried in church.

Burials were stopped at the Cemetery of the Innocents in 1780. Additional gruesome incidents spurred the removal of the graveyard. “In 1780, a restaurateur living near the Cimetière des Innocents went to retrieve some bottles of wine from his cellar, whereupon the smell of putrescence overwhelmed him,” art historian Pamela M. Lee relates in October. “He was to discover its horrifying source shortly: the walls of a mass grave adjacent to his house had burst open, sending forth a heap of neighboring corpses into his basement.”

The Cemetery of the Innocents could be ignored no longer. As it happened, another disaster had suggested a solution. Going back to the time of the Romans, limestone and gypsum were quarried in the Paris area for building material. While these mines were once on the outskirts, by the eighteenth century they were right under the city. In 1774, a hundred feet of street collapsed into the mines, leading to the establishment of the Inspection Générale des Carrières to inspect and repair the system of subterranean tunnels.

The quarries were identified as receptacle for the troublesome dead. Between 1785 and 1787, the bodies in the Cemetery of the Innocents were carted by night into the quarries. Other burial grounds soon followed. Although initially the tunnels were filled with disorganized piles of bones, in the early 1800s Inspector Héricart de Thury led the rearrangement of these remains into elaborate walls and other formations joined with masonry altars, columns, and plaques with quotations that evoked reflections on mortality. The Catacombs opened by appointment to tourists in 1809, who descended stairs into an underground illuminated by candles. Today, visitors enter beneath the words: “Arrête! C’est ici l’empire de la mort,” or “Stop: this is the empire of death.”

Most major cities have had to contend with the dead of previous generations as they grew. In Paris, the solution was to create an underground city of the departed.