Photojournalist Margaret Bourke-White dedicated her life to photography, including a trip to South Africa during the “dawn of the anti-apartheid era.” 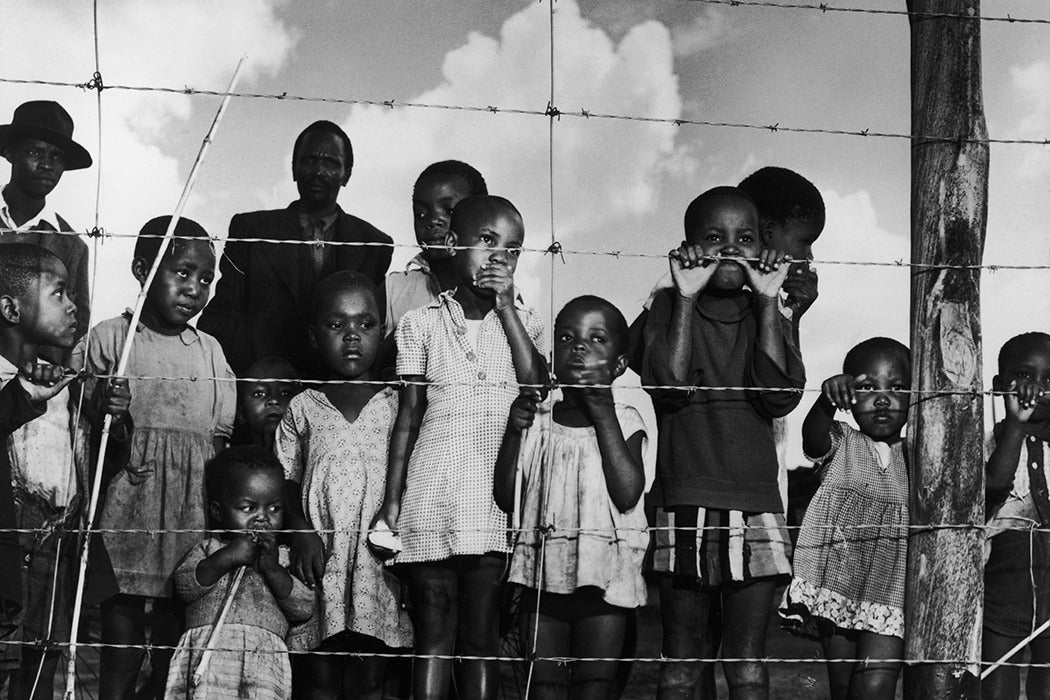 A group of children (and a few men) gaze from behind a barbed-wire fence that marks the boundary of the Moroka township in Soweta, Johannesburg, South Africa, April 21, 1950.
Photo by Margaret Bourke-White/The LIFE Picture Collection/Getty Images
By: Ellen C. Caldwell
2 minutes
Share Tweet Email Print

Groundbreaking photojournalist Margaret Bourke-White has been called the “most famous woman photographer,” yet she and her work are not widely known by the greater public. Bourke-White dedicated her life and career to photography, spending nearly five decades documenting people and creating extensive photo essays. Her work revealed the effects of the Great Depression across the U.S.; she flew as the first accredited woman war photographer in combat during World War II. And, significantly, she traveled to South Africa at the “dawn of the anti-apartheid era” in the 1950’s.

During her five-month stay in South Africa, Bourke-White documented her time and produced four photo-essays for Life magazine. John Edwin Mason analyzes these essays and their impact, arguing that two of Bourke-White’s featured photo-essays “were most Americans’ visual introduction to apartheid, the system of racial oppression and exploitation that would soon become infamous around the world.”

One of these essays, “South Africa and Its Problem,” condemned racial injustice, both verbally and visually, at the beginning of the anti-apartheid movement. In Mason’s words, “[t]he photos that Bourke-White made and the text that she influenced have lost none of their power more than sixty years after their publication.” Mason also argues, however, that a key component was missing: “[w]hile it remains one of the most compelling photo-essays ever to appear in Life, the decision that Bourke-White and her editors made to avoid showing or mentioning black activism undermined its analysis.”

Bourke-White’s photo-essay “South Africa and Its Problem” was published in September of 1950, just five months after her return from South Africa. Bourke-White returned from South Africa with a changed impression of both the people and country. Mason puts together her accounts of her experiences there through letters to friends, in which she “described the injustices that blacks endured as well as the ‘hypocrisy of inhumanity’ of whites.”

“South Africa and Its Problem” was featured prominently in Life, with sixteen pages and thirty-five photographs. “The photos and text speak forcefully about the exploitation, poverty, and indignities that blacks endured, about the wealth that they created but did not enjoy, and about the political and economic foundations of white supremacy.” Despite this, Mason notes that Bourke-White and her editors missed the mark by reinforcing harmful stereotypes in depicting “Africans as an essentially rural, pre-modern people, trapped between a collapsing ‘tribal’ culture and a modern industrial society.”

Mason argues that if Bourke-White had used the political insight her letters reveal, her photo-essay “would have reached radically different conclusions than it did.” Instead, he asserts that Bourke-White and her editors’ decision to omit black activism from their essay undermined the potency of its message. Had they included a more multi-dimensional representation of South Africa’s activists and organizers, Mason concludes that “Life’s readers would have been better prepared to understand the events of the next ten years.”

Tyehimba Jess has won the Pulitzer Prize for poetry. We found 4 of his early poems in their original publications and made them open access here.