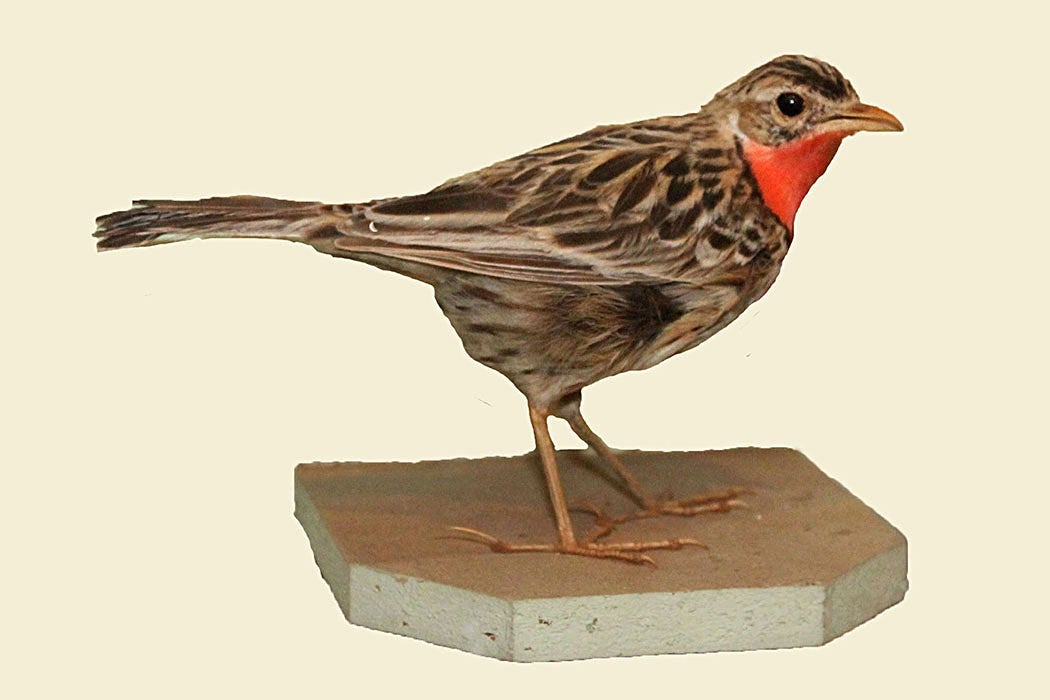 Ornithology as a science was predicated on bird specimens. But dead things decay. And even preserved bird skins, as they are called, are still tasty tidbits to the munching pests that lurk everywhere in the world, including in museums.

Historian of science Paul Lawrence Farber details how ornithologists finally figured out the preservation of bird specimens. This, he argues, was “one of the major technical problems confronting naturalists of the eighteenth century.”

Preserving specimens in brandy was another option; this kept flesh from rotting, but prolonged contact with alcohol damaged feathers and distorted the flesh.

Birds could be gutted of internal organs and fat, and the resulting skin (including feathers) stuffed with soft material like flax, wool, or hay. Solid molds could also be used. Preserving specimens in brandy was another option; this kept flesh from rotting, but prolonged contact with alcohol damaged feathers and distorted the flesh.

There was also embalming, with “aromatic spices and a drying agent such as alum or lime.” The aromatic spices could include tansy, wormwood, and hops. A 1770s recipe included “saltpeter, alum, sulfur, musk, pepper, and ground tobacco.” This specific method also included a liquid varnish made from two kinds of turpentine and camphor.

Salt and alum, however, ultimately caused disintegration. And none of these methods was pest-proof.

Finally, straight-up poison came to solve the problem. To fight insects: an insecticide. By 1830, thanks to the work and publication of French naturalists, arsenic became the preferred method of protecting specimens against insect attack. Either in a powder or soap form, arsenic was rubbed into the skin and feathers.

Of course, arsenic is toxic to humans as well as insects, so preparers and taxidermists were wise to be wary of their material. Because it’s poisonous, arsenic isn’t used for this purpose any longer, but it does linger in collections of birds skinned before the 1970s. Today, careful drying and “cryofumigation” or deep freezing are alternate methods for ridding skins of bugs. Paradichlorobenzene (PDB), better known as moth balls, has also been used to keep insects away from specimens. Some institutions practice integrated pest management (IPM) to keep the specimen eaters at bay.

All of these bird skins were initially used for taxonomic purposes, but starting in the mid-nineteenth century, naturalists began to see them as evidence of evolutionary relationships. The mockingbirds and finches of the Galapagos Islands, different on each island and unlike similar species on mainland South America, were key to Charles Darwin’s thinking about evolution. Before shipping them to England for identification, he prepared specimens himself. He learned how to do so by taking lessons with “bird stuffer” John Edmonstone, a former slave, in Edinburgh in 1826.

The Development of Taxidermy and the History of Ornithology
By: Paul Lawrence Farber
Isis, Vol. 68, No. 4 (Dec., 1977), pp. 550-566
The University of Chicago Press on behalf of The History of Science Society