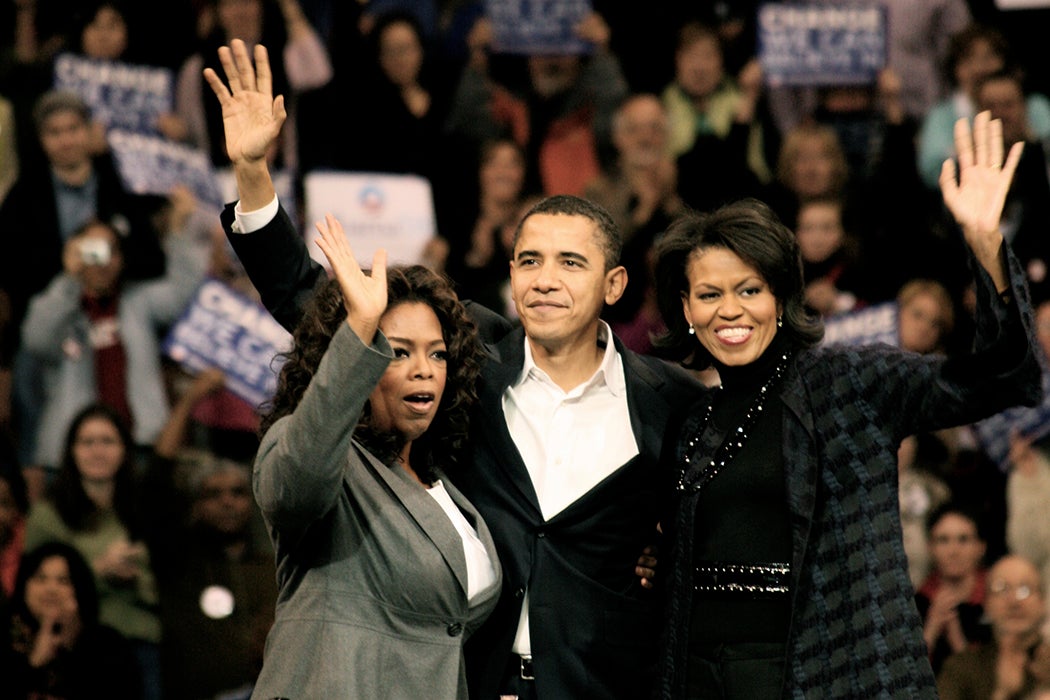 The cult of Oprah is a powerful one. The talk show host has turned into a cultural icon, expanding to media, education, and the book club that launched a thousand best-sellers. (Okay, maybe not a thousand, but a lot.) It shouldn’t be surprising, then, that a particularly well-received speech at the Golden Globes didn’t end at a standing ovation, but in whispers at a run for the White House.

It’s up for debate whether Winfrey actually intends to run, but the idea of a President Oprah has sparked excitement rather than ridicule. This may be surprising for a talk show host, but (as we saw in the last election) Americans value symbolism as much as political experience. While Oprah has little of the latter, she is the living embodiment of the self-made woman. As Sarah Henstra explains, Oprah Winfrey taps into “a wider, collective myth of self-reliance and limitless possibility commonly referred to as the American Dream.”

Oprah has become a brand, making her less vulnerable than a mere mortal.

Oprah has become a brand, making her less vulnerable than a mere mortal. While her success is sold as the product of hard work, the Oprah brand is a combination of canny marketing and deliberate posturing. Acting as more than a mere host on her talk show, Oprah worked hard to inhabit both the roles of everywoman—like her audience members—and expert—like those they so aspired to be. Take, for example, her continued discourse around her battle with weight loss. Henstra explains:

Sharing so much information with her fans about her diet and grueling exercise regimen (Oprah often says she “hates every second” of her workout, an admission that always brings laughter and cheers from her studio audience) certainly underlines her self-discipline and determination. But at the same time, viewers see the extreme effort that goes into looking camera-worthy and feel Oprah’s stardom is less mysterious, less removed from their everyday lives, than that of other media celebrities.

In essence, the talk show became a showcase for Oprah-as-a-solution. Being a guest on her show meant more than discussing a personal story or problem—guests saw it as a way to reclaim their narrative and rid themselves of shame. Oprah’s role as listener, guide, microphone, and healer transformed her into an agent for good. “The mobilization of social concern without a socio-political framework in which to act brings the question of activism back to Oprah herself,” Henstra notes. “Running parallel to and even eclipsing the show’s interview narrative is the ongoing story of the interviewer herself, Oprah Winfrey, as a force for change.”

Although there’s much to applaud about Oprah Winfrey, she’s weathered many minor controversies that would undermine the legitimacy of lesser celebrities, including an abuse scandal in a school she founded in Africa.

Controversies seem to not sully Oprah’s reputation. This fact affirms her consistent status as a beloved icon. As Henstra points out, “In Time magazine’s 2006 Time 100 survey, Oprah is profiled under the category ‘Leaders and Revolutionaries’ by none other than U.S. Secretary of State Condoleezza Rice, who claims triumphantly that ‘Oprah’s story is America’s story.'”

The Politics of Talk: The "Oprah" Interview as Narrative
By: Sarah Henstra
Studies in Popular Culture, Vol. 30, No. 2 (Spring 2008), pp. 59-77
Popular Culture Association in the South