How Opium Use Became a Moral Issue

In the 19th century, England’s working classes frequently used opium. But there weren’t laws against the drug until the middle classes started using it. 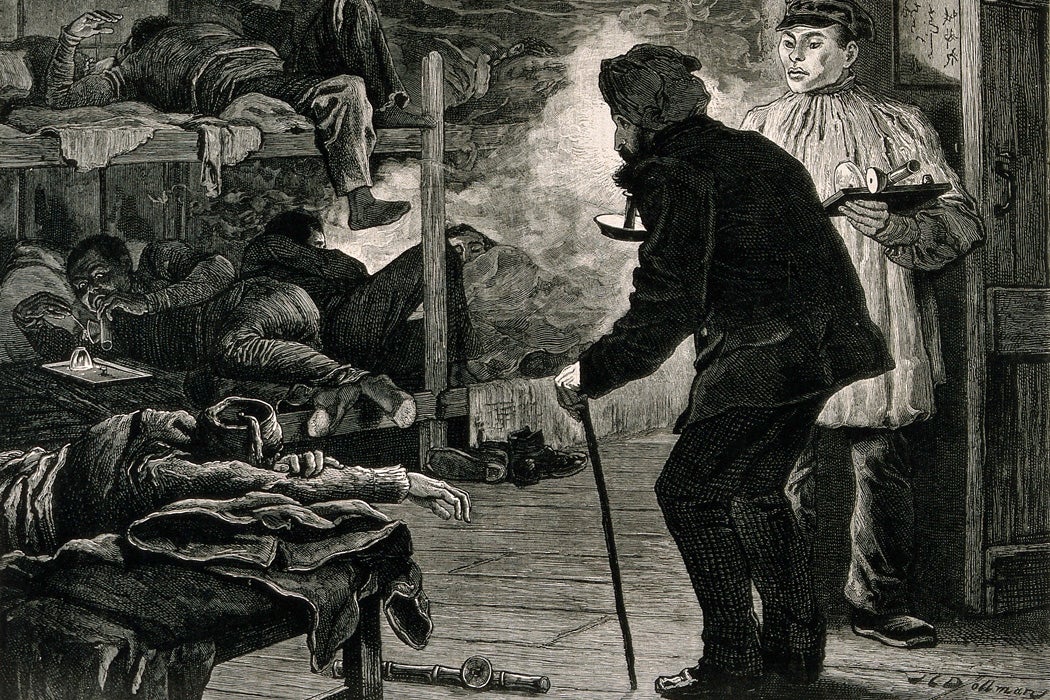 As opioid overdoses continue to plague the United States, some commentators describe the issue as a medical emergency, while others classify it as a moral failing or a symptom of broad social problems facing the working class. Historian Virginia Berridge writes that doctors and social commentators developed a similar range of explanations to account for opium and morphine use in England over the course of the nineteenth century.

For the first half of the century, Berridge writes, opium was widely available in England—sold in general stores and by hawkers who roamed the countryside. English wholesalers imported the drug in bulk from Turkey. English companies sometimes mixed it with other drugs or prepared it as liniments, tinctures, or lozenges. Retailers also sold raw opium in pills or “penny sticks.” The drug was used for a huge range of ailments in adults and children, including influenza, earaches, and heart disease.

Many working people were physically dependent on opiates, mostly as a form of self-medication.

In 1864, Dr. Julian Hunter reported to the Privy Council of England on the heavy use of the drug that he found in the region of eastern England known as the Fens:

A man may be seen occasionally asleep in a field leaning on his hoe. He starts when approached and works vigorously for a while. A man who is setting about a hard job takes a pill as preliminary, and many never take their beer without dropping a piece of opium into it.

Berridge writes that many working people were physically dependent on opiates, mostly as a form of self-medication. Opium use was not what we would now call recreational, but rather something that was both a longstanding tradition and a necessity in a society where many people couldn’t afford medical care.

To social critics of the time, opium use was a particularly working-class problem, endangering the work ethic that industrial production required. Writers also described mothers who worked in factories leaving their children with irresponsible caregivers who dosed them with opium. But Berridge writes that these criticisms were less damning than they might sound. For children who suffered from potentially fatal gastrointestinal disorders, opium could actually be a useful remedy, despite its dangerous side effects.

Toward the end of the century, a new concept of medical addiction took hold, eventually leading to the first drug prohibition laws in the 1910s. This wasn’t a result of growing danger—the death rate for the drugs fell from 6.4/million in 1869 to 4.2/million in 1912. Rather, the crisis seems to have appeared more urgent because, with the introduction of injected morphine, growing numbers of opiate users were middle-class people under medical treatment, including doctors themselves.

Increasingly, addiction became defined as a medical problem rather than simply a moral failing. The stigma around addiction lessened somewhat. But this shift also redefined functional regular opiate users as addicts, a definition that still affects how we think about our own opioid crisis today.