Long before today’s opioid epidemic, doctors shared stories of their own experiments with the drugs they prescribed their patients. 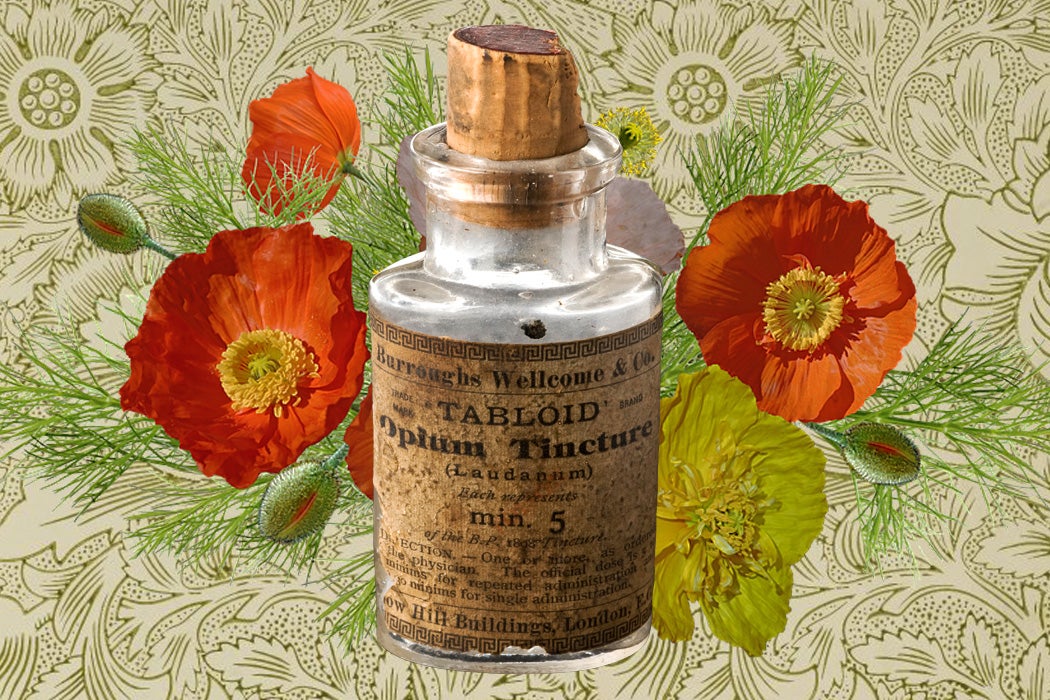 Doctors have demanding jobs, with long hours and taxing work. This professional culture combined with easy access to controlled substances has contributed to the profession being particularly hard hit by addiction. A 2009 study found that ten to twelve percent of physicians will develop a substance use disorder over the course of their careers, and of those addicted physicians, opioids are the drug of choice for 35.9% of them. In the medical community, the stigma attached to addiction is intense; doctors will avoid asking for help because they’re afraid to put their medical license at risk.

The medical profession has long had a complex relationship with opioids and their naturally-derived cousins, opiates. By the nineteenth century, opium in its various forms was central to the practice of medicine. It was a cure-all prescribed to soothe fussy infants, relieve menstrual cramps, and treat both physical and psychological pain, among other uses. It was also very easy to get, available to the public in general trade stores or from apothecaries or chemist shops. According to Barry Milligan, an expert in nineteeth-century British literature, it was this widespread availability that “helped limit the British medical professions to the fragmented, diverse, and not especially respected fields they were” in the early nineteenth-century.

Morphine injections were considered the realm of experts, to be administered only by trained physicians.

At the time, doctors had to compete for business with a hodgepodge of chemists, druggists, and apothecaries who possessed dubious levels of skill and training. Then came the advent of morphine, an opiate-based painkiller with variable levels of potency, and the introduction of the hypodermic needle. These new technologies worked in doctors’ favor, as morphine injections were considered the realm of experts, to be administered only by trained physicians.

But just as the professional medical community was securing the monopoly over healthcare, they were confronted with a serious challenge to their authority. In 1821, the English writer and laudanum addict Thomas De Quincey published Confessions of an English Opium Eater, widely considered to be the first addiction memoir.

Confessions was so popular that De Quincey became the reigning authority on the use of opium. He spoke out specifically about the medical field’s lack of credibility on the subject, since they “make it evident, from the horror they express of [opium], that their experimental knowledge of its action is none at all.” In the opinion of De Quincey, doctors couldn’t possibly act as authorities on the use of opium if they had never experienced its effects for themselves.

In response, medical doctors started to chronicle their own self-experimentation with opiates. The drugs most commonly abused were opium and laudanum, the addictive predecessors of oxycontin and fentanyl. Milligan writes that some Victorian-era physicians touted their use, or “experiments,” with opium as an asset, and used their personal knowledge of the drug to bolster their professional credibility. Prominent physicians published papers with titles like “The Morphia Habit,” “Confessions of a Laudanum-Drinker,” and the catchy, “A Hashish-House in New York: The Curious Adventures of an Individual Who Indulged in a Few Pipefuls of the Narcotic Hemp.” One anonymous doctor praised De Quincey’s subjective reporting in an 1845 issue of the Medical Times and Gazette, saying “the law of his self-experience is paramount in the profession.”

Narcotics fell out of social acceptance as they became associated with the lower classes. De Quincey’s signature work was criticized for romanticizing addiction and self-indulgence, and the writer himself was called “the seducer of countless doomed addicts,…a shameless attention seeker.” What began as a misguided effort by doctors to buoy the authority of the medical profession by correlating experience with expertise quickly lost favor as evidence-based medical practices took hold.