Hollywood’s Version of “The Snows of Kilimanjaro”

Ernest Hemingway didn’t care for it. Gregory Peck looking up at Susan Hayward in a scene from the film The Snows Of Kilimanjaro, 1952.
Getty
By: Kristin Hunt
5 minutes
Share Tweet Email Print

“The Snows of Kilimanjaro,” the 1936 short story by Ernest Hemingway, ends on a bleak note. After waiting weeks for a plane to rescue him, ailing writer Harry finally gets airlifted out of an African camp, soaring through the pink clouds and waterfalls toward the top of Mount Kilimanjaro. But it turns out it’s all a dream—the plane has not, and may never, come. Harry is possibly already dead, and a hungry hyena is circling his tent.

If you watch the 1952 movie The Snows of Kilimanjaro, however, the ending is remarkably different. After surviving another night with the hyena, Harry wakes to find the plane has come, and it’s no dream. Men are running towards his tent to help him aboard, his beloved companion Helen shrieking in delight by his side. The vultures that have been circling his camp for days have flown away. Everything is going to be alright.

These movies often looked nothing like their source material, stripped of their more unsavory aspects for something that fit better on a poster.

This strange dissonance was typical in Hollywood’s Hemingway adaptations. Due to various cultural forces, these movies often looked nothing like their source material, stripped of their more unsavory aspects for something that fit better on a poster. These sanitized films featured heroes who were fundamentally at odds with Hemingway’s world-weary protagonists, and happy endings the author rarely afforded his characters.

Hemingway was not one of those tragic writers unappreciated in their time, or a critical favorite with zero commercial pull. He was a cultural juggernaut. His books regularly appeared on bestseller lists. He was selected at least three times for the Book of the Month Club, and he won a Pulitzer in 1953—though most fans (and Pulitzer board members) thought he deserved it in 1941. His books also inspired 14 American film adaptations between 1932 and 1962, many of them box office hits or Oscar contenders.

Despite all the checks flowing out of L.A., Hemingway had an openly antagonistic relationship with Hollywood. “You throw them your book, they throw you the money, then you jump into your car and drive like hell back the way you came,” he famously quipped. The author routinely declined the opportunity to work on movies based on his work, and he usually held dim opinions of the finished product. He once told his friend Ava Gardner, “The Killers was okay, but the only good things in The Snows of Kilimanjaro were you and the dead cat.”

Why were these movies so often strangers to their creator? Some of the blame lied with the Production Code, a set of moralistic guidelines applied to movies during the Golden Age of Hollywood. The Code was enforced by a group of in-house censors known as the Production Code Administration, and they had a lot of issues with Hemingway’s work, starting with A Farewell to Arms.

The 1932 movie adaptation of Hemingway’s classic anti-war novel arrived before the PCA was formed, in the racy “pre-Code” era of movies dominated by gangsters, molls, and promiscuous socialites. Paramount had been persuaded to tone down the scenes depicting sex and childbirth, but since it was still pre-Code, they had gotten away with a lot. They wouldn’t be so lucky later. When the movie passed through a formal PCA review ahead of a planned 1938 re-release—Hollywood frequently recirculated older hits in those days—the censors ordered deep cuts. Roughly 10 minutes disappeared, including lines about the girls Frederic has “loved” and shots of him bending over his girlfriend Catherine. The alterations were jarring and obvious to anyone watching the movie, but the most ludicrous revision involved a brand new shot of Frederic placing a wedding ring on Cathy’s finger.

Making the pair a married couple rendered the entire story nonsensical—why would Cathy run off to Switzerland in shame if she was pregnant with her husband’s child? But as censorship scholar Leonard J. Leff notes, the PCA was proud of its work. “As matters now stand, Farewell to Arms, is not a story of illicit sex, but is, rather, the story of two confused persons, married to one another, but caught in the conflict and turmoil of the Great World War,” PCA chief Joseph Breen wrote. The “illicit sex” and unwed couples of Hemingway’s stories were officially on notice.

The Hollywood blacklist was another factor, according to the film professor E. Ann Kaplan. Although the Code forced filmmakers to rely on innuendo, “the values that Hemingway stood for and the codes he promulgated still had relevance in the wake of the Second World War,” she argues. “There was a questioning of the values that Americans had died for… [and] Hollywood directors were able to express a negative attitude to American society—an attitude revealed in the forties in the prevalence of film noir.”

After the House Un-American Activities Committee began blacklisting actors, writers, and directors with real or perceived communist sympathies in 1948, questioning American exceptionalism became a liability. “The Hollywood of the fifties… adopted a mood and style essentially at odds with the Hemingway code,” Kaplan writes. “This was a period when movies had to end on a happy note and when romantic love was what, more than ever, set the world right.”

This would explain the dramatically different ending of The Snows of Kilimanjaro, as well as Harry’s much less ambiguous relationship with Helen, a “rich bitch” whom Harry spends most of the short story berating or pitying. The movie makes Harry a much better companion, and a better representation of “American society” overall. Whereas in the story, his fatal leg wound is the result of forgetting to apply iodine after scratching his knee against a thorn, in the movie, he hurt himself rescuing and rushing an African guide to safety.

Hemingway never warmed to Hollywood in his lifetime, telling Esquire just three years before his death that “I couldn’t have anything to do with the pictures.” He clearly had good reason for that animosity, as these repeated instances of censorship and suppression demonstrate. But perhaps the man who spent his life chasing bullfighters, big game, and stories from the war trenches needed little excuse to avoid the glitz and artifice of the movie business. 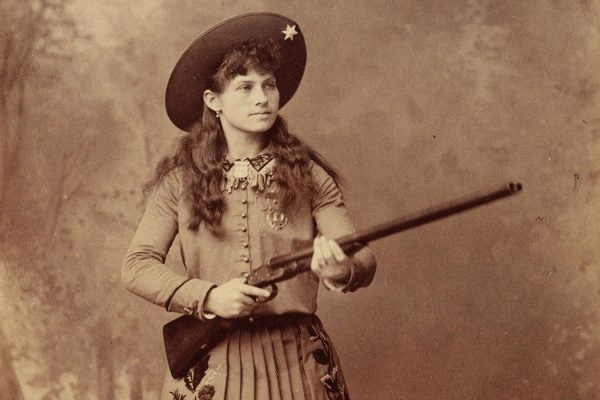 “Little Sure Shot” was famous for her precision, athleticism, and trademark femininity.