In late imperial China, it was a devotional art using hairs plucked from devotees’ own heads. 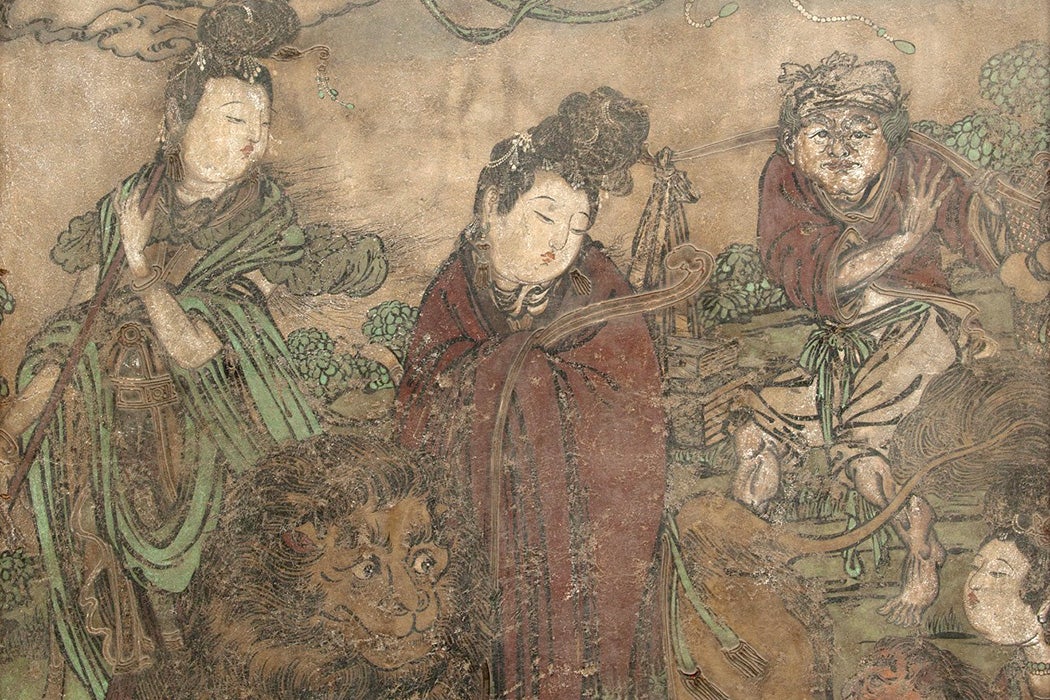 Art may often be a wildly creative individual effort. It may be a religious practice. And it may also be a laborious process using hard-won skills. As art historian Yuhang Li explains, women’s embroidery using human hair over many centuries of Chinese history was all of these things.

As early as the Tang period (618–907), Li writes, embroidery was a recognized Buddhist practice. Each stitch represented a Buddha, and, as in many devotional practices, repetition was important, with every stitch accumulating more merit. Often, the embroiderers created images of Guanyin, a bodhisattva who, in China, has usually been presented as female.

One of the best ways to demonstrate earnestness was to sacrifice one’s own hair.

While men might sometimes embroider Buddhist images, Li writes, embroidery was generally understood as a women’s practice. That was particularly true in the late imperial period of Ming and Qing China (1368–1912), when the worship of Guanyin became closely tied to women’s “domestic religiosity.” Women were widely understood to be able to achieve enlightenment through filial piety and chastity, and the home was seen as an arena for women’s religious practices, including chanting, meditation, and keeping a vegetarian diet.

In this context, embroidery was a skilled creative practice and a religious practice. Like chanting sutras, it was a way to stimulate the power of the Buddha or Guanyin through the earnest devotion and labor involved. And one of the best ways to demonstrate earnestness was to sacrifice one’s own hair.

Li writes that it’s not clear when and how hair embroidery began. It was used in Japan during the Kamakura period (1185–1333), often using the hair of a deceased person as part of a Pure Land Buddhist practice. In China, one early example that’s stylistically similar to some Japanese work is a portrait of Guanyin attributed to the well-known female painter Guan Daosheng (1262–1319). The hair in this embroidery is used for Guanyin’s hair, eyebrows, and eyelashes, while her robe, face, and other parts of the image use silk thread.

Some embroidery work in the late imperial period used only hair, employing outline stitches that mimicked certain painting techniques. According to written accounts, this often involved splitting one hair into multiple strands, presumably an extremely difficult task. Li writes that the technique has been lost over time, but scholars have confirmed that some existing hair embroideries used split hairs.

Another aspect of hair embroidery was that it used an artist’s own hair, painfully plucked from her head. Like blood writing, which was usually done by male monks, Li writes, it achieved religious pain, a way to “construct a personal relationship with the divine” through a change in their state of consciousness. Often, this was also a matter of filial devotion, a way of calling on divine powers to help the artist’s parents.

“Guanyin hair embroidery had a number of different significations and functions all linked to the particular situation of women in late imperial China,” Li writes. “But in some ways these functions served to bring women closer to transcendent dimensions.”

Zen was a conservative form of Buddhism in Japan that eventually became a way for Americans to find inner peace.