The skin and strength on display at Santa Monica’s Muscle Beach aggravated American fears of gender transgressions and homosexuality. 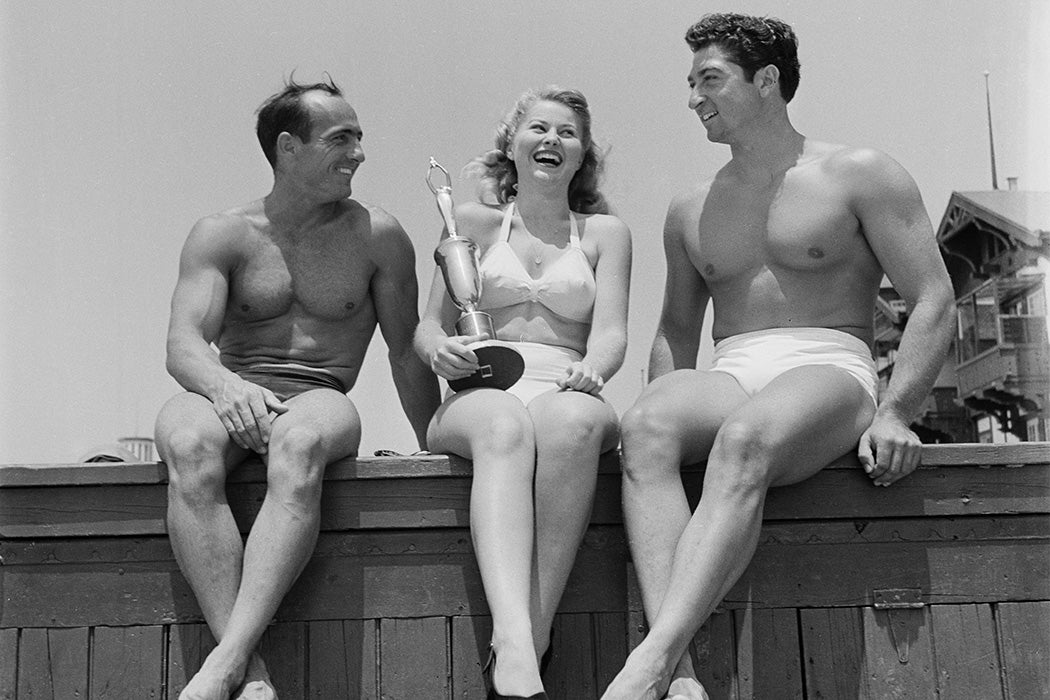 In the mid-twentieth century, a Southern California beach gained sudden fame for a strange new phenomenon: men and women cultivating muscular bodies and showing them off. As historian Elsa Devienne explains, Muscle Beach prompted both fascination and anxiety.

Devienne writes that Muscle Beach began as a children’s playground in Santa Monica. In the 1930s, it began to attract acrobatic performers and other athletes who used it as a training site. By the 1940s, local visitors could watch performers form human pyramids and perform gymnastic feats on bars and flying rings set up for that purpose. In the postwar years, a new group of athletes, bodybuilders and weightlifters, found their way to the park, giving it its nickname.

One reader wrote in to say she was “utterly disgusted” by this “vulgar display of brawn.”

Muscle Beach quickly became famous. In 1951, Life Magazine published a photo of five male bodybuilders in tight briefs as an example of how the development of musculature could go “from the sublime to the absurd.” One reader wrote in to say she was “utterly disgusted” by this “vulgar display of brawn.”

Comedians turned the Southern California site into a punchline, and the cartoon Tom & Jerry set an episode at the beach. Other beach towns opened their own imitation muscle beaches.

Behind the jokes and fascination, there was an undercurrent of anxiety about gender and sexuality. Many stories about the beach questioned how bodybuilders could perform the crucial male role of breadwinner while spending so much time working out.

“Caring excessively for one’s appearance—as bodybuilders seemed to do—was perceived as an act of vanity or, worse, as a telltale sign of homosexuality,” Devienne writes.

The female athletes of Muscle Beach also prompted worries. As one profile of sixteen-year-old beach regular Beverly Jocher put it, the young athlete could “skate, run, dance and lift weights”—but “can she sew?”

Then, in 1958, the city suddenly closed the beach. The precipitating event was the arrest of several of its athletes on charges of sexual misconduct with two Black girls, ages twelve and fourteen. Immediately, a local newspaper editor, the city’s police chief, and its recreation director launched a campaign accusing the beach of harboring “perverts” and “sex deviates.” A flurry of media reports focused on both gay men and promiscuous women. Devienne argues that this was a pretext for a municipal beach “clean-up” designed to make the area more economically desirable.

In the 1970s, a new Muscle Beach emerged just down the coast from Santa Monica in the impoverished Venice neighborhood, attracting athletes including a young Arnold Schwarzenegger. The new location reflected a shift in bodybuilding culture toward increasing conformity to certain gender norms. Women were no longer welcome to lift weights or show off their muscles; instead, they were limited to acrobatics or admiring the male bodybuilders. And, with a new freedom to discuss sexual matters publicly, the media presented musclemen as aggressively heterosexual and hopelessly attractive to their svelte female admirers.